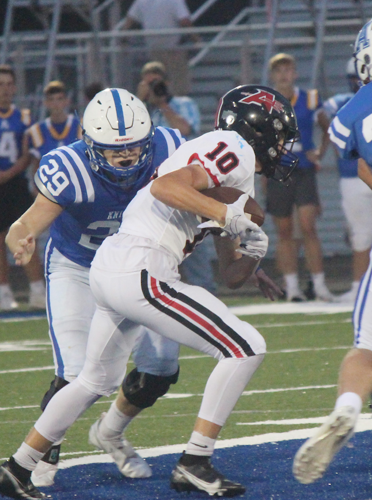 Albertville’s Hayden Howard runs with a catch in last  year’s season opener against Arab. The Aggies launch their 2022 campaign by hosting the Knights on Thursday. Albertville leads the series 46-31-4. 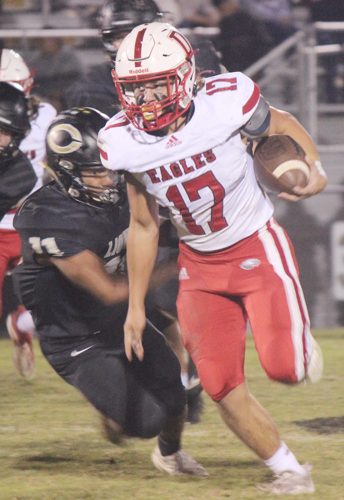 Douglas senior running back Jonathan Fountaine breaks a tackle in last year’s win over Crossville. The Eagles begin the new season by hosting Susan Moore, a team they haven’t faced since 1993. Douglas is 2-0 in season openers under head coach Brandon Lyles. Crossville kicks off the head coach Riley Edwards era by traveling to Ider on Saturday night. The Lions and Hornets haven’t played since 2003.

Albertville’s Hayden Howard runs with a catch in last  year’s season opener against Arab. The Aggies launch their 2022 campaign by hosting the Knights on Thursday. Albertville leads the series 46-31-4.

Douglas senior running back Jonathan Fountaine breaks a tackle in last year’s win over Crossville. The Eagles begin the new season by hosting Susan Moore, a team they haven’t faced since 1993. Douglas is 2-0 in season openers under head coach Brandon Lyles. Crossville kicks off the head coach Riley Edwards era by traveling to Ider on Saturday night. The Lions and Hornets haven’t played since 2003.

Over eight months of waiting has come to an end as the high school football season makes its return, and Week 0 will be a busy one for the Sand Mountain area.

Optimism abounds as the offseason comes to an end, with no wins or losses on the record, and anything that happened last season now in the rearview mirror as the season kicks off.

Nine of the area’s 10 teams will be in action this week, with three area teams set to host during the first week of non-region games.

This season sees the return of four all-state players, a pair of new coaches in the area, two who were honored in the ASWA preseason polls, and five teams who are looking to get back into the playoffs after reaching them in 2021.

Editor’s Note: All games are 7 p.m. kickoffs unless otherwise noted.

The Aggies begin Year 2 under Chip English at home against longtime Marshall County rival Arab. The Aggies are looking to rebound after a 1-9 season a year ago and return roughly six starters on each side of the ball, including quarterback Andy Howard, who was an All-County selection as a sophomore.

Arab returns to the 5A classification this season and looks to build on last season’s 8-3 mark that saw them finish as the region runner-up before falling in the opening round of the 6A playoffs. The Knights are a senior-laden team with 20 fourth-year players on the roster, including new quarterback Aidan Cox, who started every game as a sophomore in 2020.

This will be the 82nd all-time meeting between the county rivals, with Albertville holding a 46-31-4 series lead. Arab won last season’s contest at Arab, 35-0.

A deep, experienced Geraldine team hits the road for its opener, and looks to build off last season’s 7-4 mark in the first year under Michael Davis.

The Bulldogs return roughly 40 of 45 players off last season’s team, including DeKalb County MVP Jaxon Colvin at quarterback. The Bulldogs will look to extend their playoff streak to 16 consecutive seasons.

Coosa Christian enters its third season under Mark O’Bryant and have improved each season under him, going from three wins to four last season while going 3-3 in their region. The Conquerors have not made the playoffs since the 2018 season.

This will be the first-ever meeting between the two schools.

The Eagles and Bulldogs renew a rivalry that had sat dormant since the early ’90s when Douglas hosts on Friday night.

Douglas is looking to build off last season’s 6-5 mark that was their first winning season and playoff appearance since 1998. The Eagles could be well positioned to get back into the postseason with 10 returning starters on both sides of the ball, while keeping the entire coaching staff intact.

Susan Moore will be breaking in a new coach in Stephen Jackson, who takes over after five seasons of Heath Lauderdale at the helm. Jackson inherits a team that had gone 4-6 in each of the last two seasons, missing the playoffs both years.

The two teams have met 14 times in football, with Susan Moore leading the all-time series by a 10-4 advantage. The Bulldogs won the last meeting in 1993 by a 14-0 score.

A battle of two new coaches, as the Lions begin the Chris Stephenson era at home Friday, replacing longtime coach Gene Hill who stepped down this past spring. In addition to the new coach, the Lions will be breaking in a new quarterback in Blaze Gerhart. Sardis limped to a 1-9 mark last season. Sardis topped Pennington in the varsity portion of a jamboree last Friday, 8-7.

DAR also has a new coach in Brian Largen, who is the third coach in three seasons for the Patriots. Largen had been an assistant with DAR before taking over the head spot and takes over a team looking for its first winning season and playoff appearance since 2018.

This is just the third all-time meeting between the two schools, with each team winning once. DAR took the last game in 2017 by a 31-21 final.

The Pirates hit the road to Jacksonville on Friday night, where one of the region’s top quarterback prospects awaits in what will be a good early test for Jeremy Sullivan’s bunch.

Boaz counters with perhaps its deepest and most talented front seven under Sullivan, with as many as 10 guys expected to see time on the defensive line. Boaz will see sophomore Tyler Pierce under center this season after he split time a season ago.

The Class 4A, No. 4 Golden Eagles are led by QB Jim Ogle, who has offers from a number of Division 1 schools, including Troy and UAB. Jacksonville has reached the postseason in nine straight seasons, going 7-4 in each of the last two years.

The schools have met twice before with Boaz winning both, including a 20-10 win in the most recent game back in 2007.

After going 9-2 a season ago, seventh-ranked Guntersville will have its work cut out for them if they’re going to repeat last season’s Region and County championships. The Wildcats will see seven new starters on each side of the ball, but do return All-State receiver/defensive back Brandon Fussell, who led the team in receptions and interceptions last year. Head coach Lance Reese enters the season with 98 career wins.

Southside returns to 5A this season after spending the past two at the 6A level. The Panthers are led by Crossville graduate Miles Holcomb, who guided Southside to a record of 5-6 and a playoff appearance last season, with three of those losses coming in one-possession games.

Friday night’s game marks the first meeting between the two schools since 1989, with Guntersville holding a narrow 5-4 edge all-time.

The Rams enter their fourth season under head coach Chris Williams and look to build off a 2-8 mark in 2021, the first time in the young program’s history that they had won multiple games in a season.

The Rams will see a big junior class and are breaking in a new quarterback in Jacob Lindsey, while also moving to a new region in 3A.

Gaston has been one of the most downtrodden teams in the state in recent years, not winning multiple games in a season since 2016, while going 1-9 in four of the last five seasons. Matt Harris returns for his third season at the helm of the Bulldogs.

Friday night is the fifth meeting between the two schools, with Asbury rolling to a 33-8 win last season. Gaston leads the series, 3-1.

The Patriots return a talented and fast roster that has questions on both lines, but some of the deepest skill positions in the area under second-year coach Derrick Sewell. The Patriots went 4-6 a year ago and return All-State receiver and defensive back Thad Pearce, who also was a standout in the return game on special games. Quarterback Ty Jones returns for his second season as the starter.

Gaylesville are led by former Douglas coach Brian Knapp, who enters his fourth season. The Trojans have improved each year under Knapp, climbing to 6-5 and a playoff appearance last season in 1A.

West End has won all three meetings between the two schools, who have not played since 1979.

The Lions begin the Riley Edwards era on the road Saturday, in what is a return to tradition for the season-opening game against Ider.

Edwards is the third coach in three seasons for Crossville, and he looks to rebuild the Lions who struggled to an 0-10 mark last season. Caleb Causey returns for his second season as the starting quarterback for the Lions. Crossville’s last win came on Oct. 30, 2020 against Geraldine.

Ider enters its second season under Chad Grant, who took the Hornets from 2-8 the year before his arrival to 7-4 and the playoffs last season, the first trip to the postseason since 2017.

The Hornets and Lions have met 53 times previously, with Crossville holding a 33-19-1 edge. Crossville won the last game between the two schools back in 2003.

Fyffe plays at Piedmont in a jamboree game on Friday night.