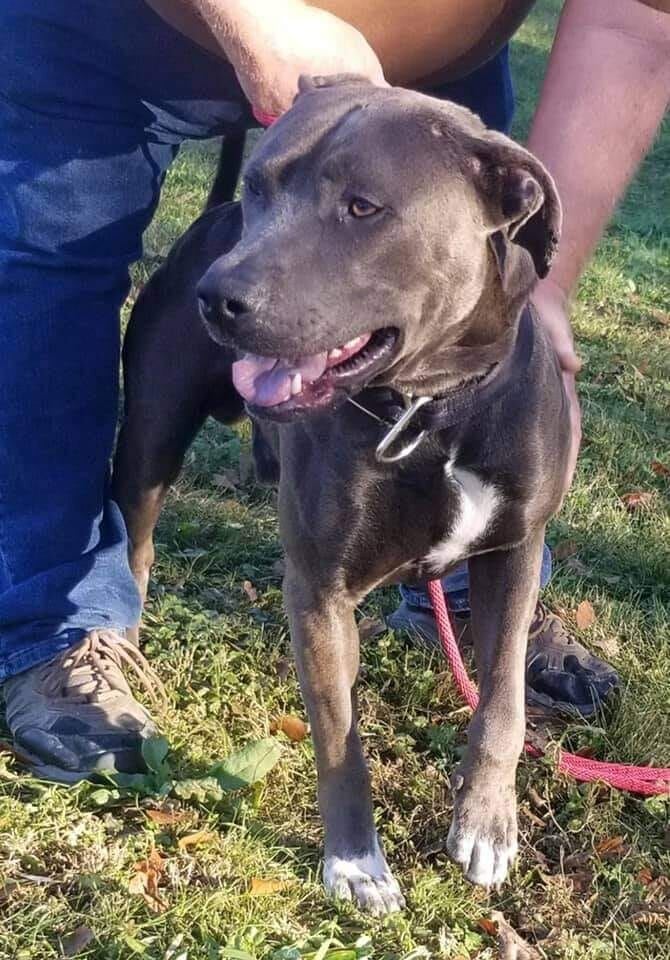 After going missing from the Marshall County Animal Shelter on Oct. 20, Havoc was located on Nov. 8 at the home of his owner's mother. 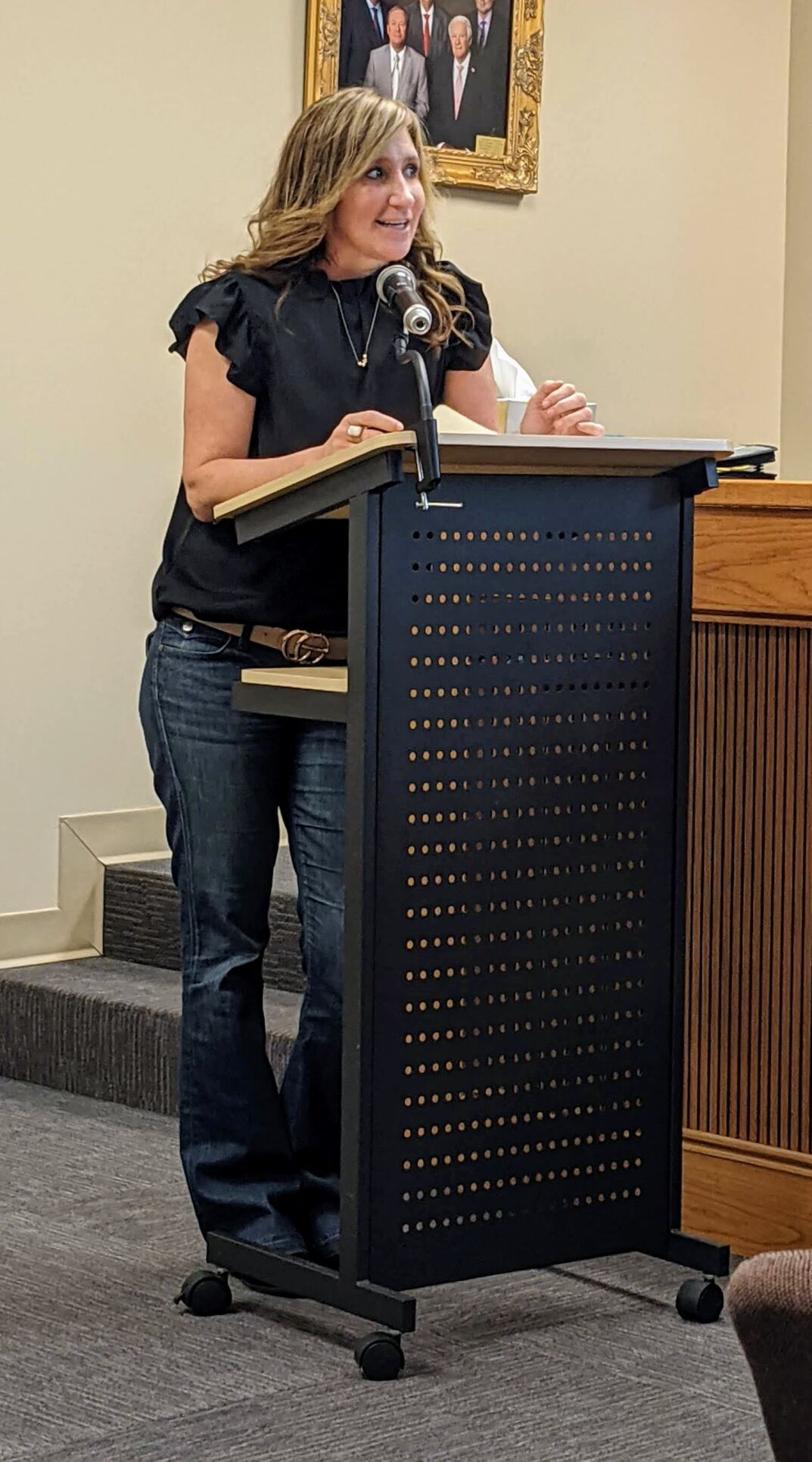 Teri Angel called for the termination of Animal Control Supervisor Kevin Hooks for his alleged actions in the case. 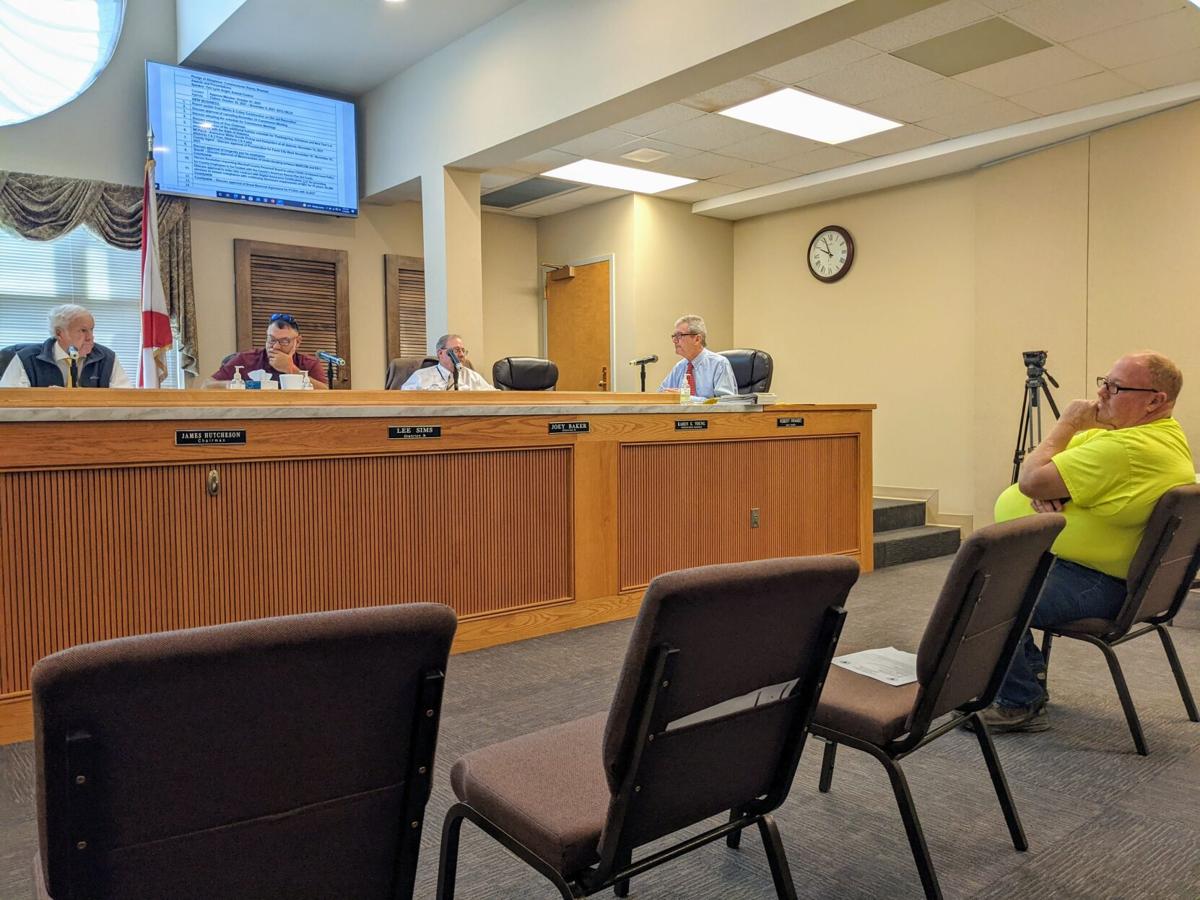 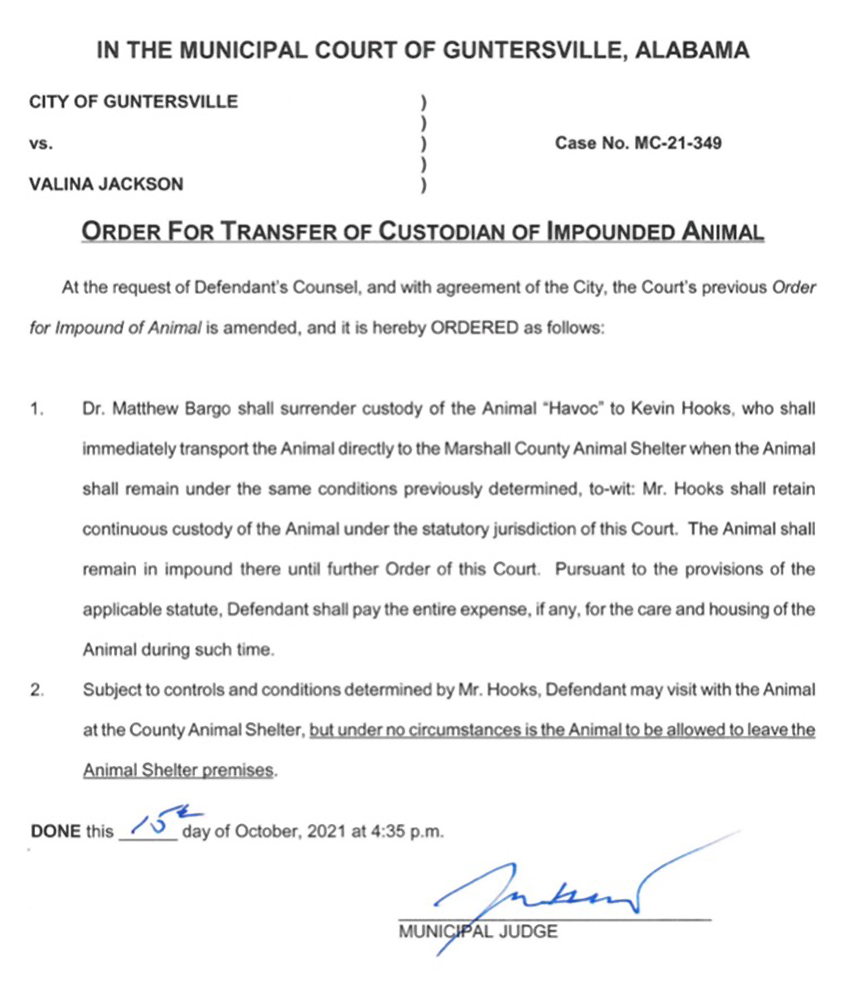 The court order issued Oct. 15 ordering the dog be transported to the Marshall County Animal Shelter.

The fate of a dog that attacked a woman in September has been decided.

Guntersville City Judge Shannon Mitchell ruled on Wednesday that Havoc, a pit bull terrier mix, should be kept at Guntersville Animal Hospital until it is humanely euthanized on Nov. 29. The dog’s owner, Valina Jackson, may appeal the judge's decision until that date.

The judge issued a nine-page ruling explaining the background of the case and reasons for his decision. On Sept. 17, Teri Angel entered Jackson’s home in Guntersville where she was attacked by Havoc and sustained serious injuries. Based on the evidence and testimony presented in court on Oct. 20, Mitchell said the conditions to legally euthanize the dog under Emily’s Law had been met.

“There is no question that Ms. Angel was bitten at least twice by the animal, tearing away several inches of her scalp with the first bite and then causing severe puncture wounds to her arm with the second,” the judge’s ruling read. “…Though more than one witness speculated on why the animal attacked Ms. Angel, only the animal would know; and for that reason, there is substantial uncertainty and risk the animal would attack a human again in the future.”

Judge Mitchell said he tried to find any way to resolve the case without having the animal euthanized, and if he ever was “on the fence” about what to do, it was the actions of the owner since the attack and during the trial that pushed him to rule against her.

“From Ms. Jackson’s efforts to prevent the initial impound of the animal, to the portions of her sworn testimony during the hearing which she later admitted were untruthful, to what now appears to have been her criminal conduct in taking the Animal from the County Animal Shelter to prevent continuation of the legal process — Ms. Jackson has consistently demonstrated that she has little, if any, regard for the truth, for the laws of our society, or for the safety of others in this community,” he said. “In Ms. Jackson's view, the [dog] is more important than any of those things, or anyone who may be affected.”

Though Jackson indicated Wednesday she planned to appeal Mitchell’s ruling, he said he would restore her right to visit with Havoc at the Guntersville Animal Hospital and postpone euthanasia for a time beyond Nov. 29 if she decided not to appeal. If Jackson does appeal and is unsuccessful, she will be responsible for paying the dog’s boarding expenses; if her appeal is successful, the City of Guntersville would incur those costs, the judge said. Later, Jackson told The Reporter she would most likely not appeal.

Jackson said she was sorry for Angel's injuries and "hated what happened to her," but she still maintained that the dog, which she said has been trained as a therapy dog, is not dangerous and what happened with the attack was a "freak accident." She said since the judge's ruling, she's been reaching to animal rights groups, including PETA, for help in saving Havoc's life.

Following the Oct. 20 court hearing, part of the fence at Marshall County Animal Shelter where Havoc was being kept was cut and the dog stolen. Jackson,  along with two other suspects Kevin Dewayne Allison, Jr. and Richard Tyler Johnson, were arrested for their alleged roles in the break-in and theft of the dog, which was found a few days later on Nov. 8 at the home of Jackson’s mother on Wyeth Mountain Road.

Jackson told The Reporter that she had nothing to do with the theft of her dog nor did she know who did. She claimed that the day before the dog was found by police, she found Havoc wandering around The Colony apartments in Albertville.

Because of this, she said she expects to be cleared of all charges, which will be tried as a separate case at a later date.

In addition to her potentially criminal behavior, Judge Mitchell added that he was as “disturbed” by Jackson’s witnesses at the Oct. 20 trial — which included Marshall County Animal Control Supervisor Kevin Hooks — as he was by the graphic photographs of Angel’s injuries. Without getting into the specific wording of the testimony, Mitchell said Hooks, who was called by Jackson’s legal team as an expert witness, testified that Havoc passed four behavioral tests and was therefore not a dangerous or vicious dog. Hooks said the dog would have had to fail at least three of the four tests in order to be deemed a threat, according to Mitchell.

Before the court hearing this past Wednesday, Angel addressed the Marshall County Commission to ask them why Hooks, as a county employee, was involved in a city case and called for him to be terminated from his supervisor position for his actions related to the trial.

“Why did the county animal control officer, Mr. Hooks, get involved in this case when he was not subpoenaed?” she asked. “Who gave him permission?.. He failed to ask questions about the dog’s history during the course of his evaluation. He failed to check into this dog’s vet record. If he had, he would have learned that this dog has a history of biting people… This botched evaluation by your county employee has me and many others extremely angry.”

In her comments, Angel also alleged that Hooks took the dog to his personal residence before transporting it to the animal shelter, which would be in violation of a court order issued by Mitchell on Oct. 15 that said Havoc was to be “immediately” transported to the shelter.

In a recent interview with The Reporter, Jackson also claimed Hooks took Havoc to his home.

“I know the first night that he [Havoc] was there, Mr. Hooks carried him to his house because he didn’t know where to put him,” she said.

Hooks denied that he ever took the dog to his home.

“You can’t really believe everything you hear,” Hooks told The Reporter. “Unless you were there at the first court case to hear what was said, then you really don’t know if what she [Angel] said [Wednesday] was true or not. But she’s entitled to her opinion, I suppose.”

Commission Chairman James Hutcheson also denied the allegations against Hooks and said he had done nothing inappropriate that would warrant termination. Without commenting on the specific case, he said Hooks was capable of dealing with vicious animals. He also said Hooks didn’t need permission to testify in a city case since it was done on his own personal time.

“I do wish the county hadn’t been involved,” the chairman said, “... but Kevin, he knows animals… I have told Kevin that I want to be personally involved in anything that goes on in the city that we deal with. I want to know, and I want to make sure we’re standing on legal ground and all that.”

Hutcheson said County Attorney Clint Maze reviewed Judge Mitchell’s orders as well as Hooks’ involvement in the case and determined there was no cause for termination.

Editor's Note: This article has been updated with further comment from Valina Jackson.

Pit bull type dogs should be spayed and neutered out of existence. Thirty people plus have been killed so far this year by these murder mongrels plus many disfigured for life. An eight day old infant just got killed in the middle of the night in NC by the parents “sweet house hippo” that had never caused any problems before.

Thank you judge for doing the right thing to protect your community- too many times the murder mongrel is given back to its irresponsible owners to attack and perhaps kill again.