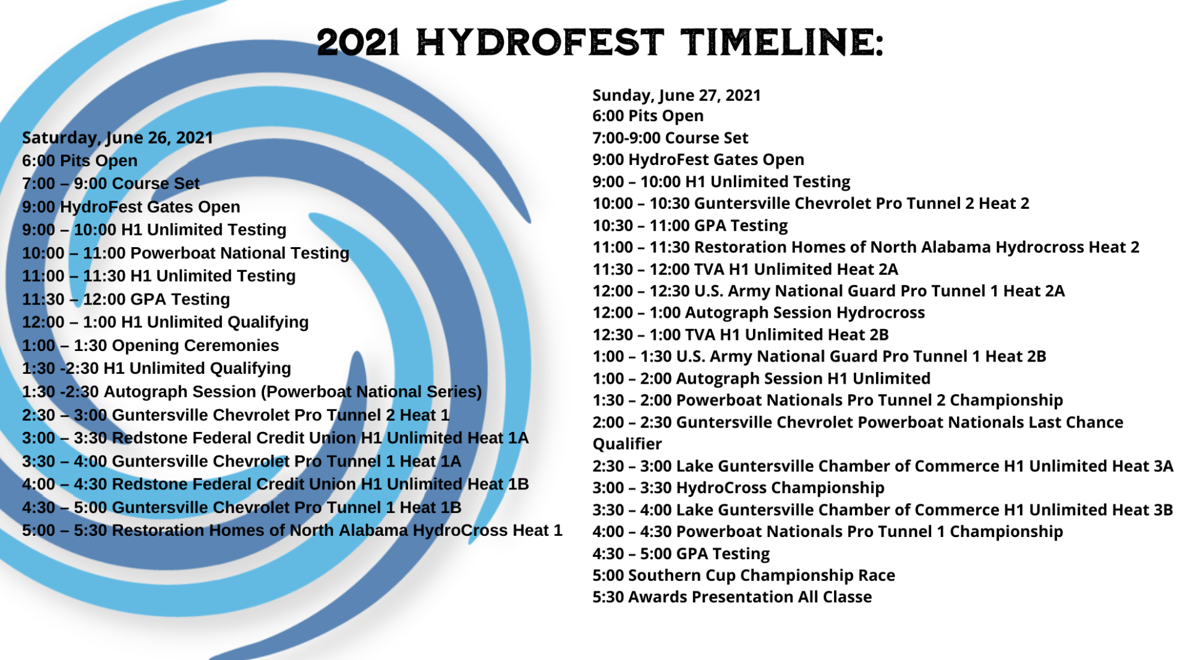 After a one-year absence, the sound of boats roaring across the waters of Lake Guntersville will return this weekend, as Hydrofest and some of the top boat racers in the country take over the lakes waters on Saturday and Sunday.

The event is a huge part of the summer in the Sand Mountain region, with the last edition of the event in 2019 bringing in around 20,000 people to the two-day event, and generating more than $2.2 million in economic impact.

The weekend will see two full days of racing action, with the gates opening at 9 a.m. each day. The races will take place south of the Alabama Highway 69 bridge, near the Sunset Drive Walking Trail.

Scheduled to race this weekend are the H1 Unlimited Series, the Powerboat Nationals, and the Grand Prix America racing series.

The H1 Unlimited boats are hydroplanes that use the water they are on for propulsion and steering. In competing for the Southern Cup, the H1 hydroplanes will give Alabama race fans the “Greatest Show on H-2-O” as they careen across the water at speeds reaching 200 miles per hour and throw a spectacular plume of spray high into the air.

Seven hydroplanes are expected for the H1 Unlimited season opener in Guntersville. The field includes several very fast boats driven by talented drivers—a combination that is likely to produce one of the most competitive seasons of racing in many years.

Headlining the action will be the return of Dave Villwock, the sport’s all-time greatest champion, who will be driving Miss Beacon Plumbing. Adding to the excitement will be two entries by a new race team owned by Vanessa and Darrell Strong of the Tri-Cities, Washington, and the move of former national champion Andrew Tate to the cockpit of Graham Trucking, a boat that ended the 2019 season with three straight victories.

The field also will include Miss HomeStreet, which will represent the team that won the 2019 national title and was winner of the most recent Guntersville race. Driving duties will be shared by Jimmy Shane, 35, of Covington, Washington, the defending national champion and winner of six titles, and Jeff Bernard, 36, of Kent, Washington. Their boat this year will be a craft that won 23 races and eight national championships during its career.

The race in Guntersville will be the first H1 Unlimited Racing Series event held since the 2019 season ended. Last year’s races were canceled because of the Covid-19 pandemic.

The Powerboat Nationals is a 10-team circuit with jet boats reaching speeds over 70 miles per hour, and racing that allows for tight maneuvering in the corners. The Grand Prix America series is another hydroplane series with 1,600 horsepower engines and speeds that can reach over 160 miles per hour.

The first testing sessions are scheduled for 9 a.m. on both Saturday and Sunday, with the first heat races scheduled for 2:30 p.m. on Saturday, and for 10 a.m. on Sunday.

Tickets to the race are still available at explorelakeguntersville.com. For those who can’t attend, the race also will be streamed live on the H1 Unlimited YouTube Channel. You can find a link at H1Unlimited.com.

General admission tickets are $15 per day, with kids ages 6 to 12 at $5, while kids Five and Under get in free. A weekend pass that grants admission each day is $20 for adults and $10 for kids. Active duty military get in free with an ID.

Guests are not permitted to bring coolers, tents unless they have paid for a designated tent spot, grills, weapons, pets, bikes, skateboards or hoverboards.

During the time Hydrofest is on the water, that area of the lake is closed to boating, fishing, and swimming.