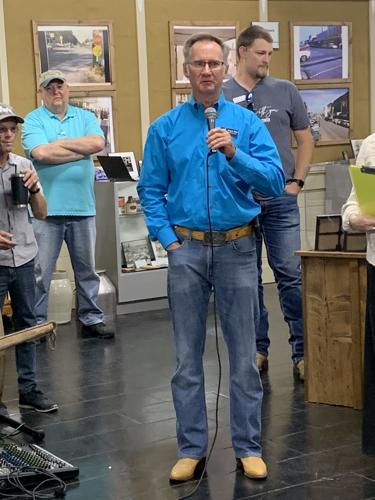 Wayne Hunt and Mayor David Dyar (below) spoke at the ribbon cutting event. “This couldn’t have happened without a lot of people and the city,” Hunt said. “I’m very grateful for all the help.” 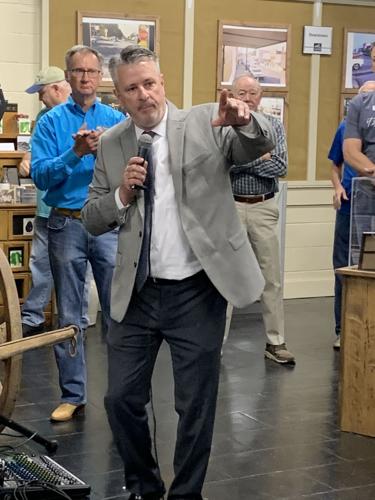 Wayne Hunt and a small committee of volunteers worked for years to find a home for the museum, gathering exhibits and items to display and to put together a well-organized and attractive museum for the community.

Wayne Hunt was visibly moved Friday when city leaders and members of the community cut the ribbon on the city’s Legacy Museum.

Hunt and a small committee of volunteers worked for years to find a home for the museum, gather exhibits and items to display and to put together a well-organized and attractive museum for the community.

“This couldn’t have happened without a lot of people and the city,” Hunt said. “I’m very grateful for all the help.”

Inside what once housed the city’s post office are displays showcasing the city’s rich history, from farming to cars, churches to schools and much more.

“This museum is a real labor of love,” said Museum Coordinator Lindsey King.

“It is a beautiful display of working together. We have all been a part of history in the making here in Boaz.”

Both Hunt and King say the Legacy Foundation and museum will bring history alive for visitors.

In one corner, Marshall DeKalb Electric Co-op has installed poles, wires and a transformer from the 1950s. In a display case and on adjacent walls are photos of workers, Co-op officials and power lines coated in ice during a winter storm.

“The town of Boaz had electricity, but it was strange that a short way out of town, people didn’t have power until 1942,” Hunt said. “Marshall DeKalb Electric Co-op was so critical in the early years. They really worked hard to get rural areas onto the grid.”

In the center of the building is an unusual find dedicated to the auto industry.

Two vehicle bumpers are hooked up to a bracket, chain and cable system that would allow local businessmen to travel to Chicago by train or carpool to purchase two vehicles. One would be driven home while the second was towed behind.

“Somehow, when the guys started coming home after World War II, a lot of them fell into the automotive field,” Hunt said.

“They set up body shops and repair shops in barns and any buildings they could find. Chicago was the used car center while Detroit was the new car center.

“Men would pool their money together and take the train to Chicago. They would buy two cars, driving one back while the other was towed behind it.

“There were no interstates at that time, so they took Highway 205 up there and back. It was known as 241 then, or the Florida Short Route.”

“If you were a councilman, mayor, doctor, lawyer, whatever, you went to one of the ‘Big 3 Churches,’” Hunt said. “Every decision made came out of the thinking of one of those three churches.”

In 1905, Poplar Springs Baptist Church came into being, serving the large and well-respected Black community in Boaz.

“The town made sure (the black community) had a place to worship,” Hunt said. “The other churches rallied together to help build the church. Alex Griffin was the pastor and many of his relatives still live here.”

Another large display includes two rows of theater seats and a stage curtain from the Rialto Theater. The theater opened in 1924 in the building now housing Weathers Furniture. In 1940, they moved into a new building. The display showcases movie posters from the era and photos showing off the theater’s stage, live music performances and Rock Around The Clock sock hop.

“We were able to do a lot with a little bit of money,” Hunt said. “We were given $10,000 two years ago by the Marshall County Legislative Delegation and we still have some of that money left over.

“You may need money, but all I need are people willing to step in and help. It took a lot of people, and I am forever grateful.”

Days and times of operation have not been set yet.