Yael Lucas of Douglas rises up for a shot attempt against Arab on Tuesday night. Lucas hit a game-tying 3-pointer with under 20 seconds left to make it 41-41, before teammate Jaylon Spain hit a game-winner at the buzzer for a 43-41 win over the Knights. 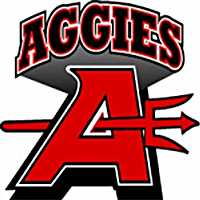 The Albertville Aggies got their most balanced scoring effort of the season, seeing three players finish in double figures, then used a fast start to help take down Fort Payne on the road Tuesday night, 60-57, for the first win under new head coach Dylan Bunnell.

Givenchy Dorival netted 16 thanks to four 3-pointers to lead the Aggies (1-3), while Sam Barclift and Conner Lowery scored 11 and 10, respectively. Elijah Moss chipped in with nine points for Albertville, who saw eight different players score in the win.

The Aggies looked to make it a rout early on, posting a 23-12 advantage after one, but Fort Payne battled back in the second, outscoring Albertville 15-7 to cut the lead to 30-27 at the break.

The Aggies maintain that three-point lead over the final two quarters, icing the game at the foul line in the fourth. The Aggies were 6 of 7 at the stripe in the final period, including a pair from Dorival late to make it a three-point game, then seeing Fort Payne's tying shot bounce off the rim.

Luke Stephens of Fort Payne led all scorers in the game with 20 points, while Connor Cash chipped in with 12 for the hosts.

Albertville returns to the court Friday night for the hardwood edition of the Backyard Brawl at Boaz.

Jaylon Spain played the hero for Douglas on Tuesday night, hitting a shot at the buzzer to lift the host Eagles to a 43-41 win over county rival Arab in the home-opener for Douglas.

Trailing by three with 19 seconds left, Yael Lucas started the comeback bid by knocking down a 3-pointer to make it 41-41. Lucas led the eagles with 11 points, their only player in double figures.

Then Isaac Eubanks made the defensive play of the night, getting a steal off an Arab inbounds play with under 10 seconds left to give the Eagles the last shot.

Out of a timeout with 4.7 seconds left, Spain buried the winner as the horn sounded. Spain's winner helped him finish with eight points, while Eli Teal and Jackson Sims each netted eight as well. Raygan Edmonson chipped with six points for Douglas.

Arab's Ed Johnson led the way for the Knights, pouring in a game-high 21 points, including three 3-pointers in the second quarter.

Douglas returns to action on Friday with a road game at Collinsville.

Visiting DAR spoiled the season-opener for the Sardis Lions, jumping out to a big early lead, then holding on the rest of the way for an 80-71 win.

The Patriots got out to a fast start, outscoring the hosts 26-16 in the opening frame and never looked back. With DAR leading by 14 after three, the host Lions attempted to rally with 23 points in the fourth quarter but could not complete the comeback.

DAR got a huge game from AJ McCarmey, who racked up a game-high 28 points in the victory, while Trey Bolt and Lathan Miles each added 12 for the Patriots.

Sardis returns to the court Thursday night when they host Glencoe.

Host Brindlee Mountain used strong defense in the second half to hold off county rival Asbury on Tuesday night, 53-45.

The host Lions took a narrow three-point lead after one, then saw Asbury trim the lead to two heading into the halftime break. But out of the break, Brindlee clamped down, holding the Rams to 20 points in the second half to pull out the eight-point win.

Stanisha Donovic scored 11 points to lead Asbury (2-2), their only player in double figures, while Dezmond Nichols and Yahir Jarquin each added eight.

The Rams were hurt at the foul line, going just 8 of 17 for the game.

Asbury saw three players score in double figures and made a big first quarter lead stand in a home victory over Madison County.

The Rams held the advantage from jump, never trailing as they jumped out to a 16-8 lead after the opening quarter.

Eldy Gonzalez scored a game-high 19 points to lead Asbury, while Zack Adams knocked down four 3-pointers on his way to 14 points. Stanisha Donovic netted 11 for the Rams.