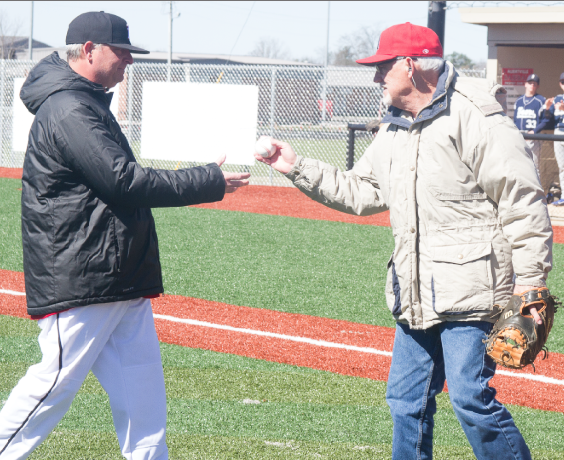 The Albertville Chamber of Commerce directed a dedication ceremony for the newly renovated baseball field at Sheldon Elmore Park on Saturday morning.

Chamber, city and school board representatives joined the Aggie baseball team for the ceremony, which included a ribbon cutting, brief remarks by Albertville Mayor Tracy Honea and a prayer by the Rev. Barry Dunn, senior pastor of Albertville First United Methodist Church.

The Atlanta-based Sprinturf installed artificial turf on Albertville High School’s football, baseball and softball fields. The Albertville City Board of Education accepted the company’s bid of $1,417,400 for the project last October.

Jeff Simmons, who has served as the Aggies’ head coach since 2003, threw out the ceremonial first pitch to his father, Wendell.

Simmons, a 1990 graduate of AHS, joined the Aggie baseball staff in 1997 as an assistant coach under Darrell Cooper. He is retiring from coaching at the end of the 2017 season.

“It has been really unbelievable,” Simmons said of the new playing surface. “I think by far the best thing is just no lost time. When you show up, you and the kids are doing baseball.

“I know field maintenance is a huge part of every high school baseball coach’s day and part of their plan and their kids’ plan. But now when we show up, from start to finish it’s all baseball. All the worries of the field grooming and the maintenance are gone.”

“Really, unless it’s raining straight down, there are no rainouts,” Simmons said. “It drains unbelievably well, and it’s pleasing to the eye.

“The best thing is if it gets the kids excited, then the old fat coach is excited. As soon as people started talking about turf, our kids were just absolutely overjoyed because it was something new to them.

“It plays good — the [bad] hops are gone. We have zero complaints. I think it will be something not only the people of Albertville, but the kids in this program will be proud of for years to come.”

The field’s old natural surface experienced multiple problems with drainage since the Aggies moved there full-time in the 1999 season.

“In 2013, we had a wonderful baseball team,” Simmons said. “We wound up being 21-8. Prior to that season, our kids never practiced on the field one day, and we played seven of our home games at Guntersville that season.”

Simmons said the school board made strides to correct the drainage issues, but was never able to completely resolve them.

“I think when our board and our administrators started looking at this, they said this is a problem. We need to be able to get our kids on our field whenever we want,” Simmons said.

“They made a decision to go ahead and do this and took the bull by the horns, and I don’t think we’ll ever look back. I think for us this was a home run, an absolute home run.”