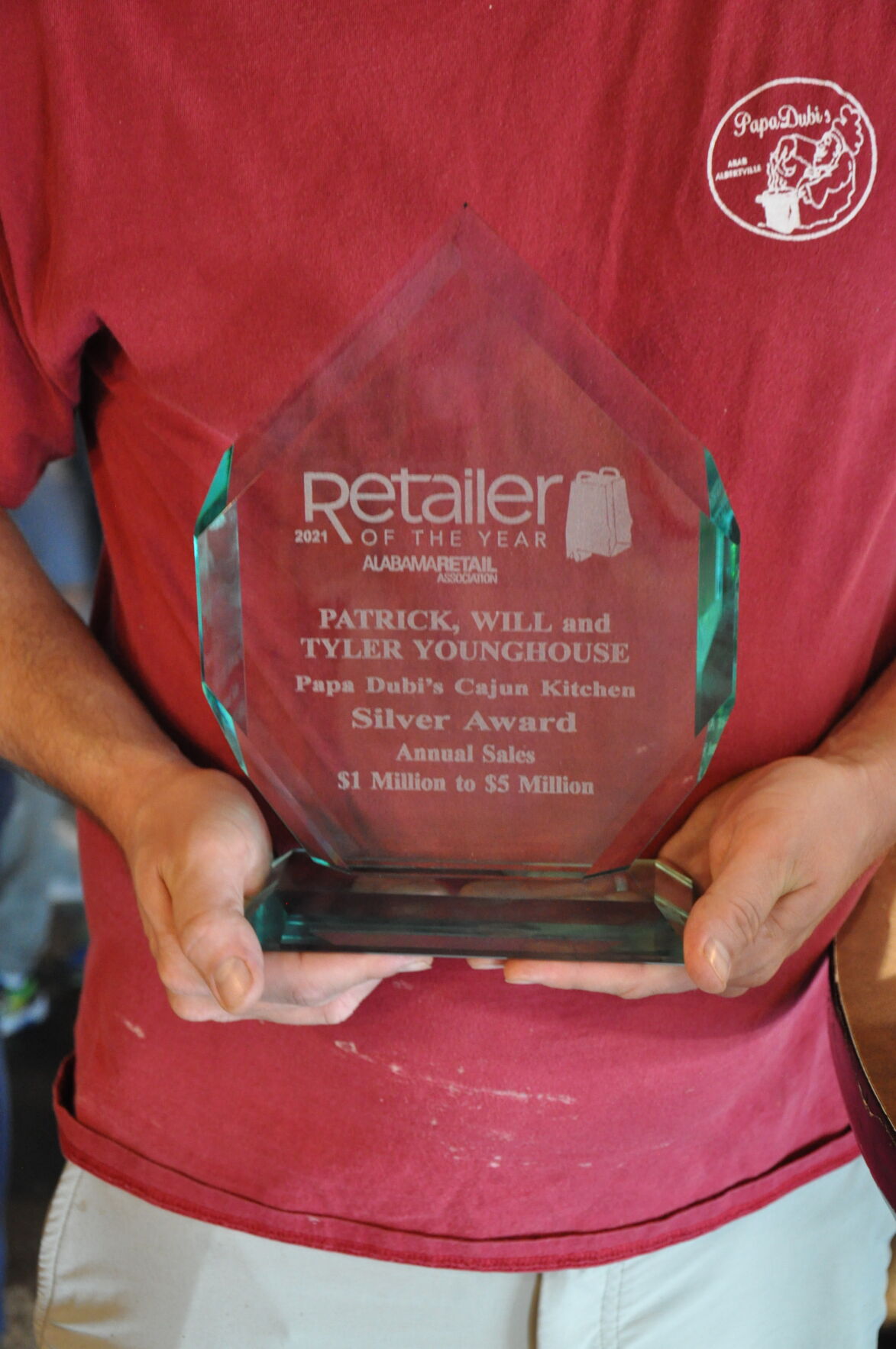 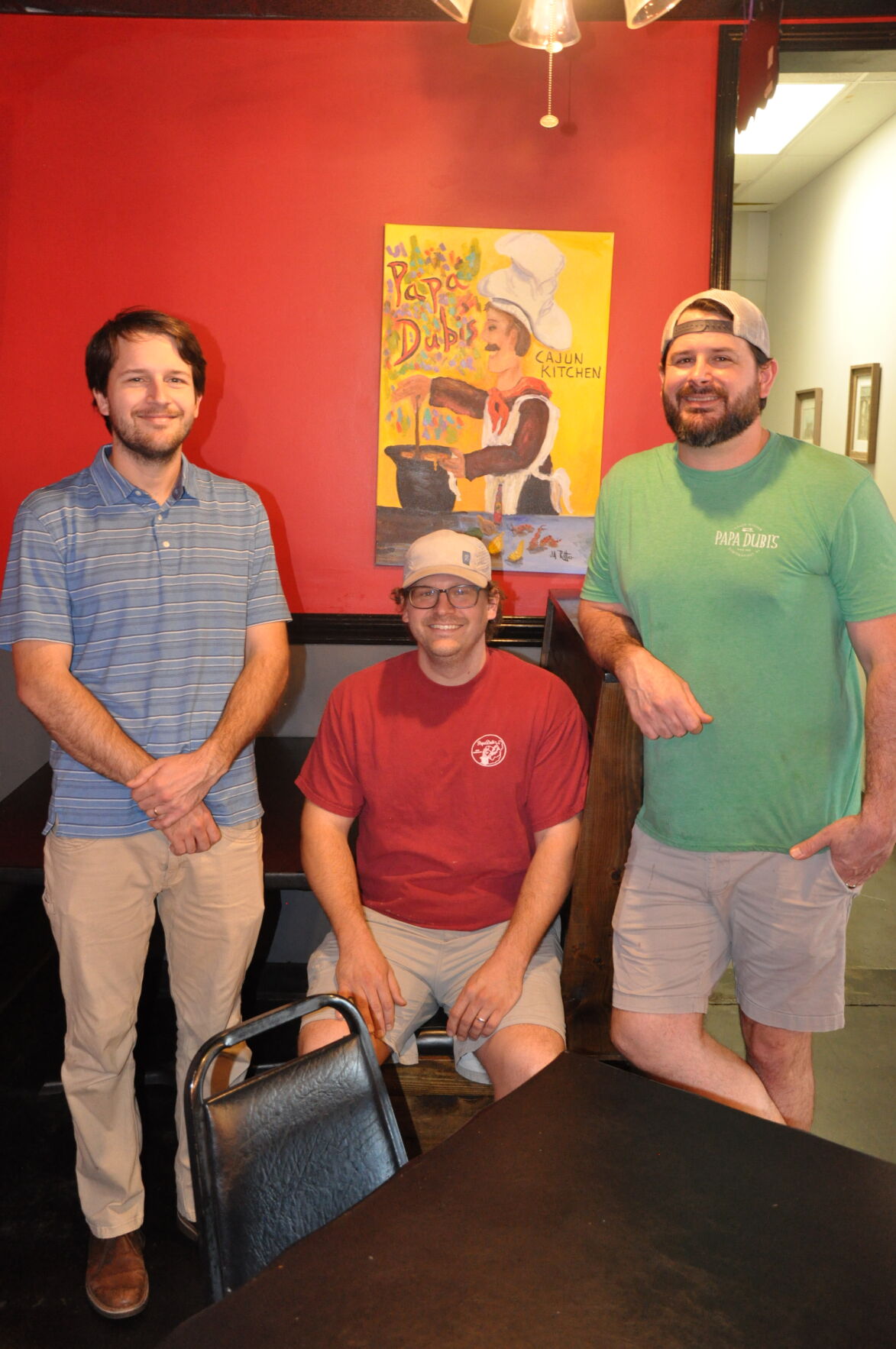 Tyler, Patrick and Will Younghouse are congratulated by Richard Brown Jr., president of the Alabama Retail Association. Brown awarded Retailer of the Year to Papa Dubi’s Cajun Kitchen based on their work during the COVID pandemic to keep their restaurant open and thriving.

The COVID-19 pandemic didn’t slow down the Younghouse family and their Cajun restaurant, Papa Dubi’s in Guntersville.

Despite being forced to shut down for several weeks, the owners were determined to “thrive and not just survive.”

Monday, they were rewarded for their efforts with the 2021 Silver Retailers of the Year in Annual Sales Between $1 million and $5 million category.

“This award is well deserved,” said Albertville Mayor Tracy Honea. “The family has carried on a good tradition; they are doing an awesome job.

The restaurant is located within the Albertville city limits, but has a Guntersville postal address.

“The only reason we don’t put Albertville on our address is we would never get any mail,” joked Will.

Founded in 2005 by father and son, Dan and Patrick Younghouse, Patrick and his two brothers, Will and Tyler, have run the business that pay homage to their great-grandfather since 2016.

“I retired five years ago,” Dan said. “Every time I walk in here the boys remind me how well things are going since I left.

“I’m so proud of my boys. If someone is going to outdo you, it should be your kids.”

Will said the restaurant will soon move to a $2.4 million, 5,500-square-foot facility less than two miles away from the current location, bringing the first indoor/outdoor dining experience in Marshall County.

Being innovative during the pandemic led to a growth in the sales that helped make the move possible.

“We were the first restaurant locally to number parking spots, use window Expo markers and dictate where customers were to park when arriving,” Will said of the adjustments made immediately after the restaurant was forced to shut down due to COVID-19.

The restaurant launched online ordering, upgraded its website and posted beautiful images of food on social media. The Younghouses also took advantage of every angle allowed, including selling beer to go.

“It meant all of our employees had the opportunity to keep their jobs and make more money than they had ever made while working here,” Will said. “Our staff actually grew during the pandemic. We were doing more business without a dining room than the previous 14 years of our existence.”

Will said he had compared carryout numbers before the pandemic and now, finding they increased and stayed high even after the restaurant reopened the dining room.

“It was quite a year and we haven’t stopped growing yet,” Will said.

The Retailer of the Year judges noted that Papa Dubi’s “probably had the best COVID success and innovation of any entrant.”

“The growth was so significant that the restaurant outperformed its previous year even without its catering business,” said Stan Witherow, president of the Albertville Chamber of Commerce, who nominated the business.

During the pandemic, Will said the staff and employees of Papa Dubi’s made suggestions on how to keep serving customers.

“We cleared out this room and had coolers and shelves put in,” Will said of the original restaurant dining room which is now home to the bar and a grouping of high-top tables.

“The ideas from the staff worked most of the time. It was really fun. I was actually kind of sad when we had to go back to the normal way of doing things.

“But nothing slowed us down.”

“This award is not for just us three brothers,” he said. “It wasn’t anything we did. All our employees stepped up and made this work. We all just kind of rolled with it. It made us better.”

After taking a hiatus in 2020, the Alabama Retail Association this year honored 11 retail businesses with operations in 13 Alabama cities as Retailers of the Year. Together, these businesses employ more than 400 at 16 locations.

A panel of judges – representing retail developers, chambers of commerce and former Retailers of the Year – selected 10 Retailers of the Year. Each winner has demonstrated a blend of sound business practices along with commitment to their communities, customers and employees. The public chose the Customers’ Choice Award Retailer of the Year through a contest online and on the Alabama Retail Association’s Facebook page.

The Alabama Retailer of the Year awards started in 1999, honor retailers who have demonstrated growth, innovation and a commitment to their respective communities. This year’s winners were selected from 49 entries submitted from a pool of 80 nominees.

“Patrick, Will and Tyler Younghouse are retailers of the year every year to Papa Dubi’s customers, their 40 employees and the Albertville and other Marshall County communities,” said Alabama Retail Association President Rick Brown.