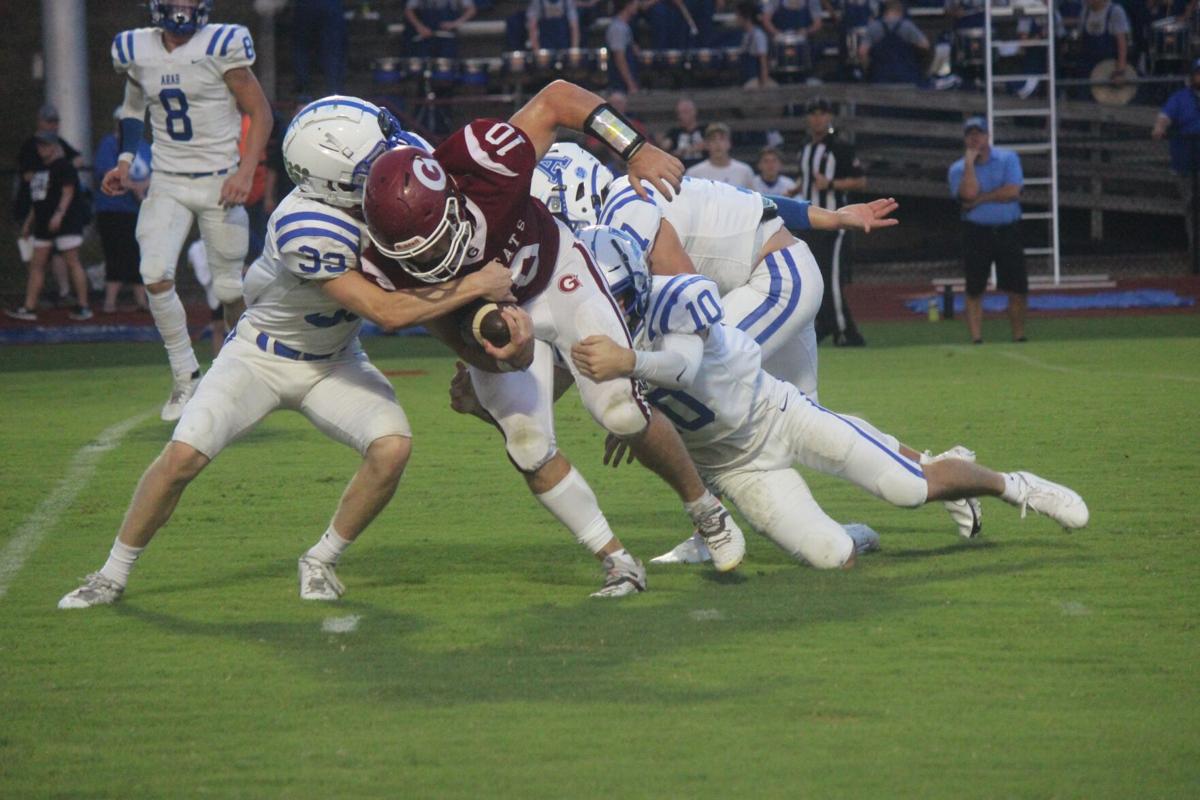 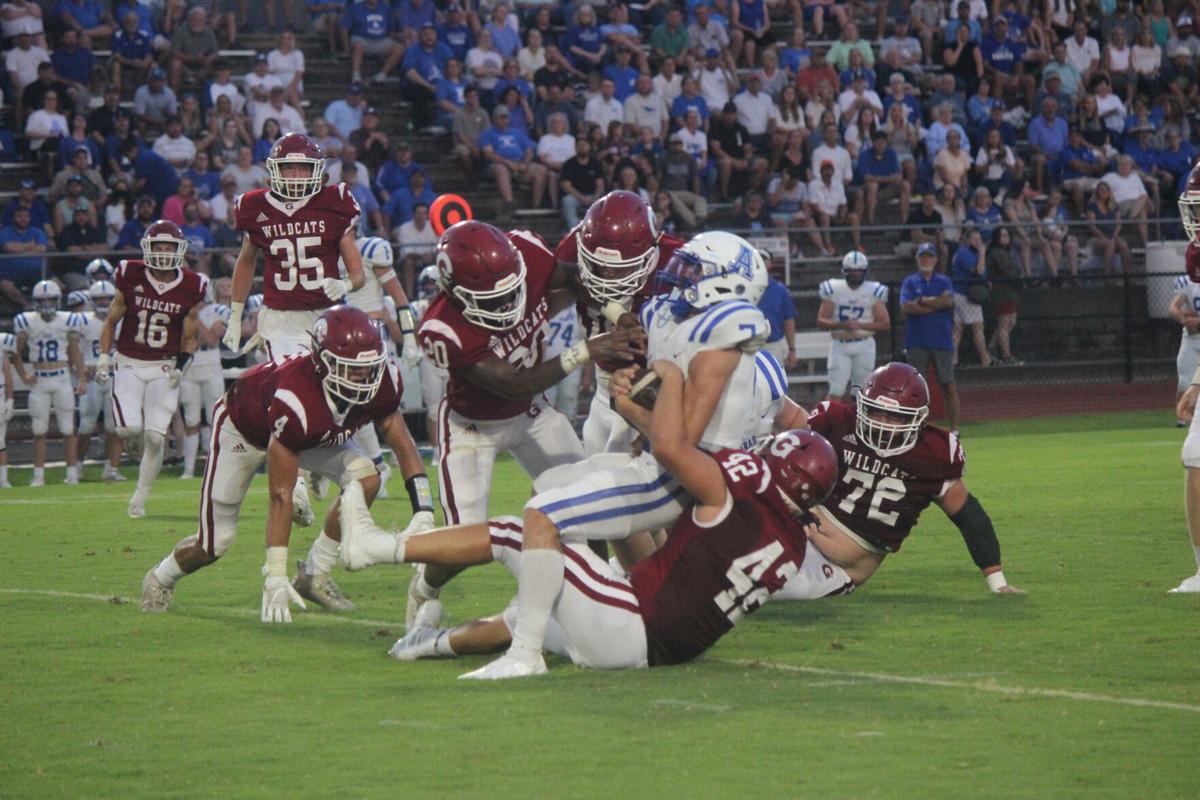 Guntersville -- Guntersville and Arab traded big plays on both sides of the ball like a couple of prize fighters, hoping to gain the upper hand in the battle for Marshall County bragging rights.

But it was the Guntersvile Wildcats who made more big plays, getting nine points from the defense, a trio of scores from Logan Pate, and forcing four Arab turnovers, while overcoming three turnovers of their own to pull out a thrilling 29-21 win over the Knights at Chorba Lee Stadium.

The win evens each team’s record at 1-1.

“Really proud of the team, it wasn’t a fun week to be a Wildcat last week, we were very disappointed in our effort,” Reese said of the team’s game against Handley last week. “But, we went to work and worked hard everyday, and it paid dividends tonight. We showed toughness and grit, and you have to have that to beat a team like Arab, who’s physical, well-coached, and it was just one of those Marshall county rivalry games.”

For the Wildcats, it was often a game of missed opportunities as well, getting inside the Arab 10 on two occasions, including the game’s opening drive, and coming away with no points.

But on their second possession, the Wildcats took advantage of a short field, starting at the Arab 35, and finding the end zone when Cole McCarty hit running back Logan Pate on a slip screen for an 18-yard score and a 7-0 lead.

That lead remained until halfway through the second when the Knights pieced together their first drive of the game, helped by quarterback Ed Johnson converting a 3rd and 14 play to the Guntersville six, then punching it in two plays later to make it 7-7. Johnson had a monster game on the ground, toting the ball 38 times for 213 yards and all three scores.

Guntersville appeared set to take the lead back late in the half, but the Knights forced a fumble deep in their own territory to halt the drive, then started on a drive their own led by Johnson that got near midfield with around a minute left.

The Knights then took a shot downfield to try for a big play, but Guntersville’s Brandon Fussell jumped into the passing lane, then raced 60-yards down the sideline for a touchdown with just 44 seconds left to send Guntersville to the locker room up 14-7. While Johnson excelled on the ground, the Guntersville defense made life difficult on him through the air, holding him to 6 of 19 for 58 yards and a pair of interceptions.

“I thought we did show improvement on defense this week, so I’m proud of the players,” Reese added. “I thought our staff worked hard, not just on scheme but getting back to fundamentals and doing things right.”

Guntersville didn’t wait long to extend that lead out of halftime, as two penalties put Arab on their own four to start the second half, then a wet field after halftime rain caused a mishandled snap and a safety to make it 16-7.

The Wildcats then failed to take advantage of the free kick, going three and out, and punting, but getting the ball back on the first play when the Knights coughed the ball up at the 11, but again Guntersville squandered the chance, mishandling a field goal snap to keep it at 16-7.

“We certainly saw things we need to improve on,” Reese said of the missed chances. “We made some mistakes offensively where we could have put the game away, we had unforced mistakes, which is what you don’t need if you’re going to be a good football team.”

Then Johnson went to work, busting loose for a 72-yard run before eventually plowing in from a yard to make it 16-14.

Guntersville had its answer in the form of a trick play, with McCarty pitching to Pate, who stopped, set, and tossed to a wide open Fussell for a 29-yard score, making it 23-14 heading to the fourth.

But again it was Johnson keeping the Knights in the game on the ensuing drive, coverting a 4th and 6 from the Guntersville 30 down to the 19 to keep the drive and the game alive, before eventually adding his third rushing score from five yards out to cut the Guntersville lead to 23-21.

The Wildcats had an answer though, going 65 yards in just over two minutes, including a key 3rd and 7 conversion when McCarty found Fussell for 26 yards into Arab territory, before Pate broke a tackle just past the line of scrimmage and sprinted up the middle for a 20-yard score, his third of the game. Pate finished the night with 104 yards on the ground, adding 30 receiving yards and the 29-yard passing score, while McCarty was 12 of 21 through the air for 147 with an interception, along with 41 rushing yards.

Twice on Arab’s following drive they converted a pair of fourth downs, eventually reaching Guntersville territory. On 2nd and 10 with a minute to go, Johnson dropped to pass, floated a ball towards the Guntersville sideline that Cooper Davidson made a leaping, tip-toe catch along the sidelines to seal the win. In addition to his interception, Davidson led the ‘Cats with seven grabs for 79 yards on offense.

“We saw a lot of things we need to improve on next week,” Reese concluded. “But the number one thing I saw that I was proud of was the effort the kids gave, and the toughness we showed tonight.”

With the win over Arab in the books, the Wildcats will now hit the road for another tough game, this time against Fairview, who was 9-1 a season ago, with that lone loss coming to Guntersville. Fairview rolled over Vinemont on Friday night, 56-28.