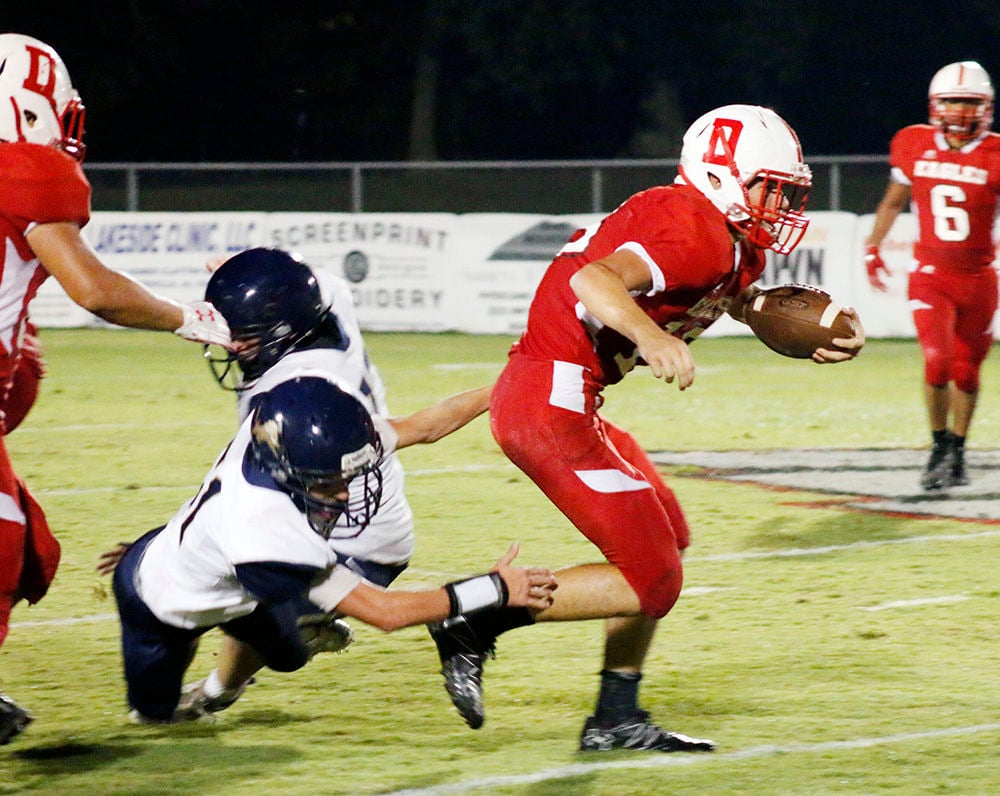 Dakota Stewart contributed on both offense and defense for the Douglas football team as a freshman in 2019. His father, Tim Stewart, is a former Eagle and current DHS assistant coach. 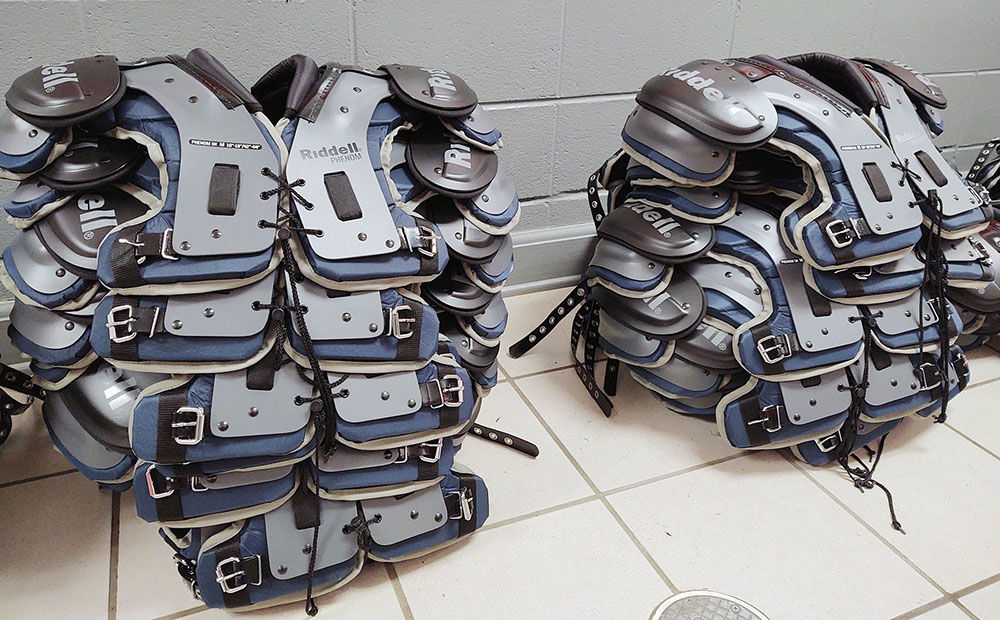 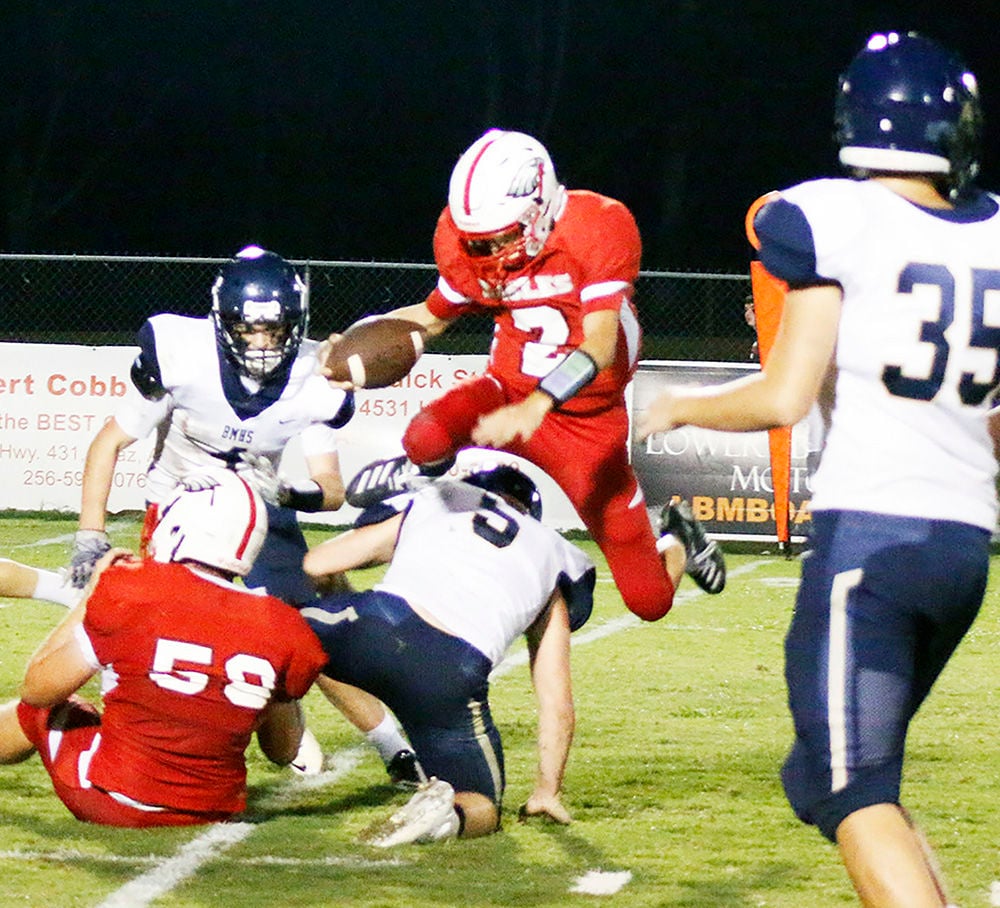 Douglas sophomore Eli Teal hurdles a would-be Brindlee Mountain tackler during the Eagles’ homecoming victory in 2019. Beck is a key returning playmaker for the Eagles, who kick off the 2020 season by hosting Weaver on Aug. 21.

Dakota Stewart contributed on both offense and defense for the Douglas football team as a freshman in 2019. His father, Tim Stewart, is a former Eagle and current DHS assistant coach.

Douglas sophomore Eli Teal hurdles a would-be Brindlee Mountain tackler during the Eagles’ homecoming victory in 2019. Beck is a key returning playmaker for the Eagles, who kick off the 2020 season by hosting Weaver on Aug. 21.

DOUGLAS — New head coach Brandon Lyles is encouraged by the attitudes and work ethic exhibited by the Douglas football players who attended workouts during June, which was Lyles’ first month in charge of his alma mater’s program.

“From when we first started it just seems like our numbers have grown,” Lyles said. “Then we kind of had a setback. Some of them had been exposed, or been around somebody [who tested positive for COVID-19], so they’ve been pulled away for 14 days. Trying to get those guys back will be huge.

“Overall, I’ve been pleased with the ones who have shown up. Obviously, we want to get more players and we’ll continue to try and push that. Hopefully when school starts back we can get more to come out here.”

The Eagles are off this week for the Fourth of July holiday.

Lyles is Douglas’ fifth head coach since Brian Knapp’s eight-year tenure ended in 2015. Because of the coaching carousel, many of the players aren’t accustomed to June workouts.

“They don’t know what it’s like to have stability, and that’s sad,” Lyles said. “I’m hoping us being here and trying to start something in June will show that, ‘Hey, this is all we know. We’re going to work out in June and July and get ready for fall.’

“We’re a young team. I’ve counted two seniors, but I really feel comfortable with our freshmen, sophomores and juniors who have been showing up. I’ve been pleased with their attitudes.”

Players are divided into groups for workouts, with one group doing agilities outside while the other lifts in the weight room. The groups rotate before coming together outside to install offensive and defensive formations.

The Eagles alternate offensive and defensive days in their installation work, because Lyles expects many of them to play both ways.

Lyles is making sure his program is following the COVID-19 safety measures mandated by the AHSAA.

“When the players come in we screen them,” he said. “My trainer has being doing a good job of checking temps and asking the questionnaire we’ve got. We’ll split them up into small groups. If they’re close together, we’ll tell them to wear facemasks.

“Every day after they leave, I use a pump sprayer that has disinfectant, and then they gave me some type of gun, it’s a little sprayer, and you put a tablet in there with water and spray it down, and it’s supposed to sanitize and clean.

“We’re just trying to make sure we can continue to roll on, and so far we have. It hasn’t been easy, but the kids have shown up and done what they need to do, and we’re trying to do what we need to do to make this work.”

Miller is a former Eagle player who served as an assistant coach for Class 1A state champion Lanett last season.

“It was really big to get him, a guy that played here under us several years ago,” Lyles said. “I coached Mark. He played offensive line. He’s a very smart, intelligent guy.

“I needed a guy to come in and help on the offensive line, and I feel really comfortable with Mark coming back. A hard worker, a great guy and somebody I can trust.

“Trevor is back. He’ll be helping on the offensive side of the ball. I hope I get to steal him some on defense. Janssen Baker is back, so those guys will be doing the offense for me.

“Josh Smith is coming from Albertville and will help me on the defensive side of the ball. He coached ninth grade there.”

Garrett and Stewart will coach on defense.

“I wanted Coach Whitis to move up, but I think he was comfortable staying down there,” Lyles said. “It’s big knowing that I’ve got stability in the middle school, I can trust him and he’s going to do a great job.”

New stuff for the Eagles

Since Lyles took charge of the program, he’s worked with the Douglas administration and the school’s athletic booster club to acquire new Riddell shoulder pads, new helmets and new jerseys for his players.

“When I took the job, we looked around at what we needed,” Lyles said. “We obviously needed new shoulder pads. Some of those shoulder pads had been in there [equipment room] maybe since I played.

“Talking to [Principal] Mr. [Patrick] Smith and the quarterback club, they said whatever we need, let’s get it first. We got over 40 brand new shoulder pads, I think it’s close to 40 [Riddell] SpeedFlex helmets coming in and then we got home and away brand new jerseys.

“They’ve been awesome to work with. They’ve done everything we needed. They’ve jumped on it and really have helped with that part of it.

“We’re pleased with what we’ve got going on right now, and we’ve got to continue to build.”