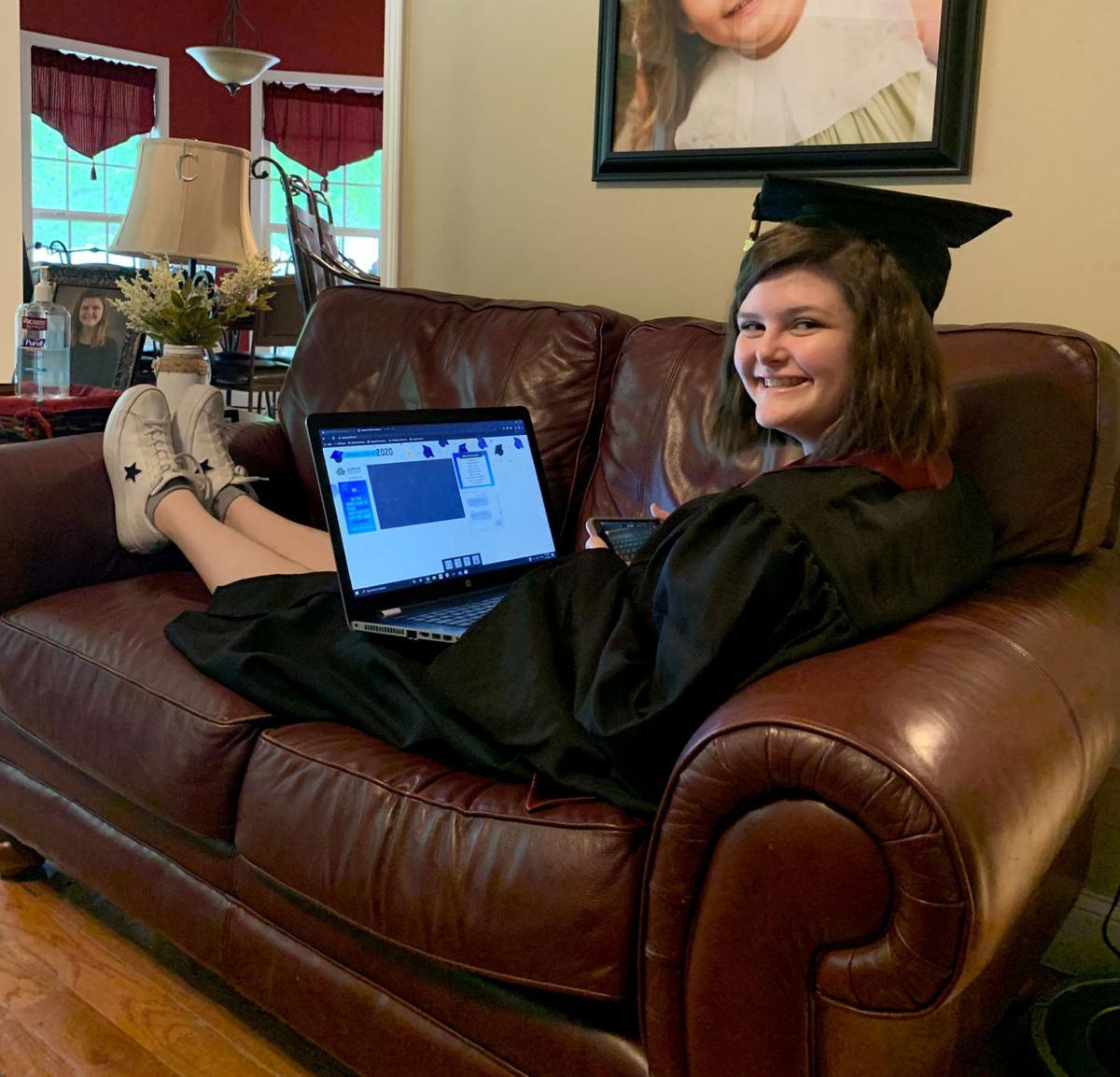 Albertville teen Sarah-Elizabeth Cheek, 17, who had been taking classes online for the last four years through Alabama Virtual Academy, graduated early May 8. She’ll attend Shorter University in the fall. 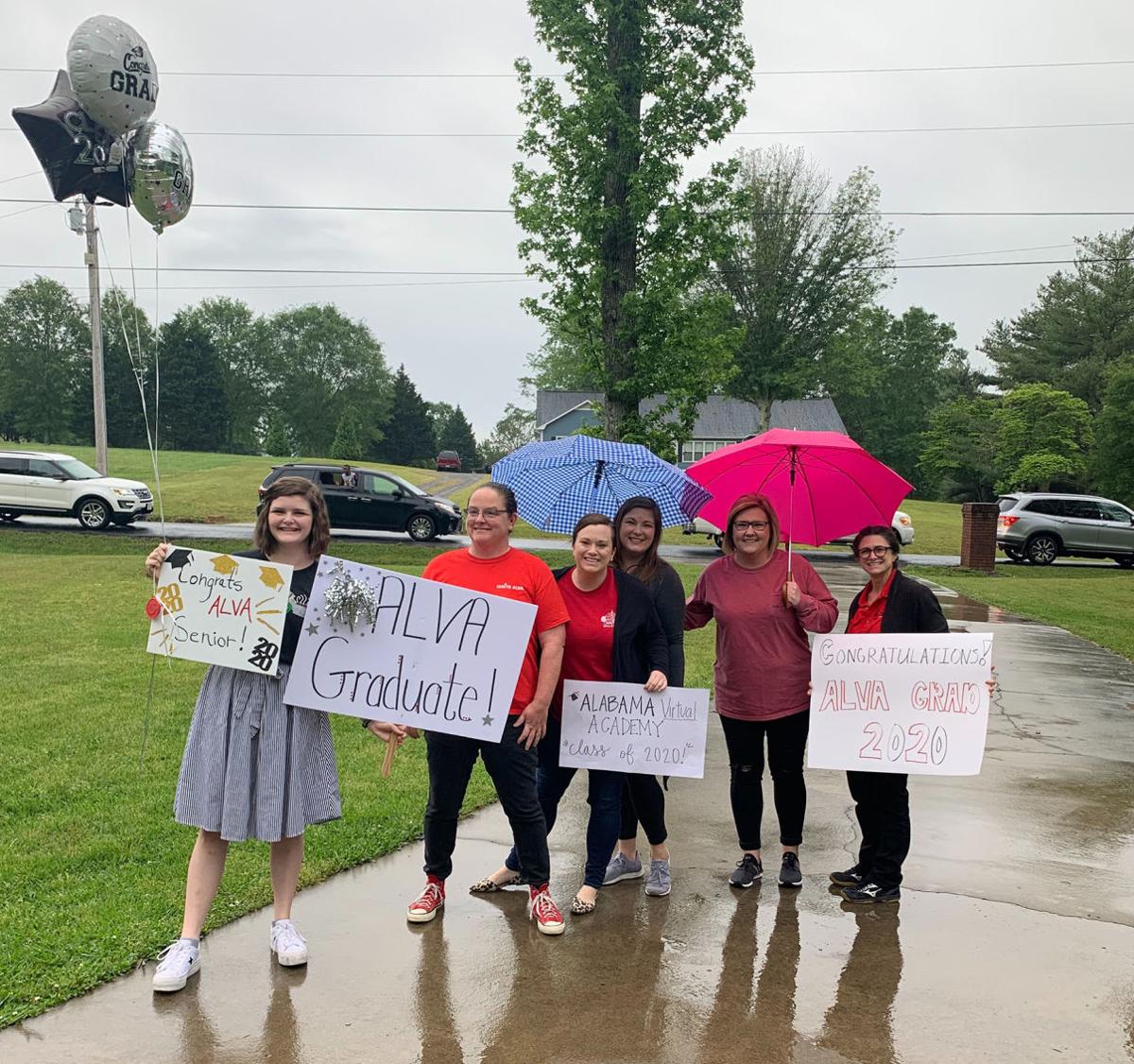 Representatives from the Alabama Virtual Academy surprised Sarah-Elizabeth Cheek, of Albertville, at her house on graduation day with balloons and hand-written signs of encouragement and congratulations.

Albertville teen Sarah-Elizabeth Cheek, 17, who had been taking classes online for the last four years through Alabama Virtual Academy, graduated early May 8. She’ll attend Shorter University in the fall.

Representatives from the Alabama Virtual Academy surprised Sarah-Elizabeth Cheek, of Albertville, at her house on graduation day with balloons and hand-written signs of encouragement and congratulations.

On Friday morning, May 8, Albertville teen Sarah-Elizabeth Cheek donned her cap and gown in preparation for her high school graduation ceremony. But instead of walking across a stage, Cheek sat on her living room couch with her laptop in hand as she and her fellow online classmates received their virtual diplomas.

Though she was hoping to be able to graduate in person, Cheek is no stranger to doing school over the internet. While thousands of students across Alabama have had to adapt to at-home learning due to the coronavirus pandemic, Cheek has been taking classes online for the last four years through Alabama Virtual Academy.

Representatives from the virtual academy surprised Cheek at her house on graduation day with balloons and hand-written signs of encouragement and congratulations.

“I felt very appreciated and loved,” Cheek said. “Not many schools would take the time to go out of their way to surprise individual students like that with balloons and yard signs!”

Working at her own, advanced pace, Cheek excelled in her studies enough to graduate a year early and enter college with 35 credit hours in the bank, which she earned through dual enrollment classes at Snead State Community College.

“I’m glad I’m getting to graduate, but [online] is not the same by any means,” she said. “It’s a little disappointing, in all honesty, just because graduating in person was like my proof to people. It’s not the same as homeschooling, but people have this prejudice toward homeschooling or anything online. When you’re at home, they think that it’s just super easy and not a lot of work you put into it, but I know that I’ve put in the effort.”

If graduating a year early with college credit isn’t enough proof of all her hard work, the 17-year-old also received the Eubanks scholarship from Shorter University, which is awarded each year to the top two female and male applicants. Valued at more than $130,000, the yearly stipend will take care of most of her higher-education expenses, minus books.

“I’ve always been a super-duper hard worker,” Cheek said. “I’ve never not tried my hardest at anything, so it was nice to be recognized… It was only by the grace of God, I think, that I got it… It was pretty awesome to see that I was being awarded for my hard work.”

Cheek said she plans to study nursing in college and eventually become a nurse practitioner after earning a master’s degree in nursing from UAB. She said she’s particularly interested in pediatrics largely due to her own battle with cancer as a young child.

At just two and a half years old, doctors discovered a malignant tumor attached to Cheek’s S2 spinal nerve and diagnosed her with Ganglioneuroblastoma. Surgeons at Children’s Hospital in Birmingham were able to remove 98% of it, which was sent off for testing along with a bone marrow biopsy to make sure the cancer had not spread. Thankfully, not only had the cancer not spread, the remaining 2% of the tumor appeared to be benign.

Cheek said though she was too young at the time to remember most of it, knowing how close she came to her own mortality has given her a focus and perspective not typically found in teens her age.

“It’s given me an appreciation that most people don’t really have, and it makes me a little aged because I don’t have the perspective of most people my age where they’re wanting followers on Instagram and Snapchat — I don’t really care for those things. I care more about my family and how I can help others because I know that in this life we’ve only got one time to make a difference and I don’t want it to be shone on me. I want it to be shown on God.”

Cheek said she truly believes God has a plan for her life. She said she was called to be a missionary at age 14 and hopes to one day use her nursing skills to help others across the world. She currently interns with the Fellowship of Christian Athletes and operates her own YouTube Channel, SECs Wonderland, where she posts both fun and devotional content.

“I hope to use the information I learn in college in my education to help others,” she said. “Even if I don’t technically preach, then I’m helping others through that.”