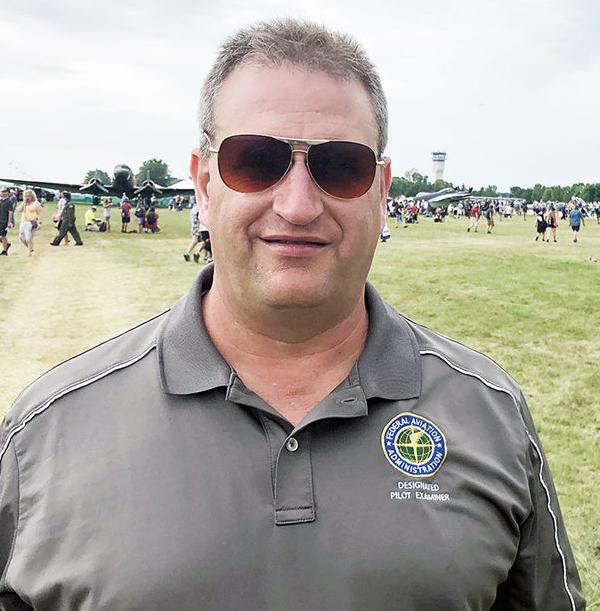 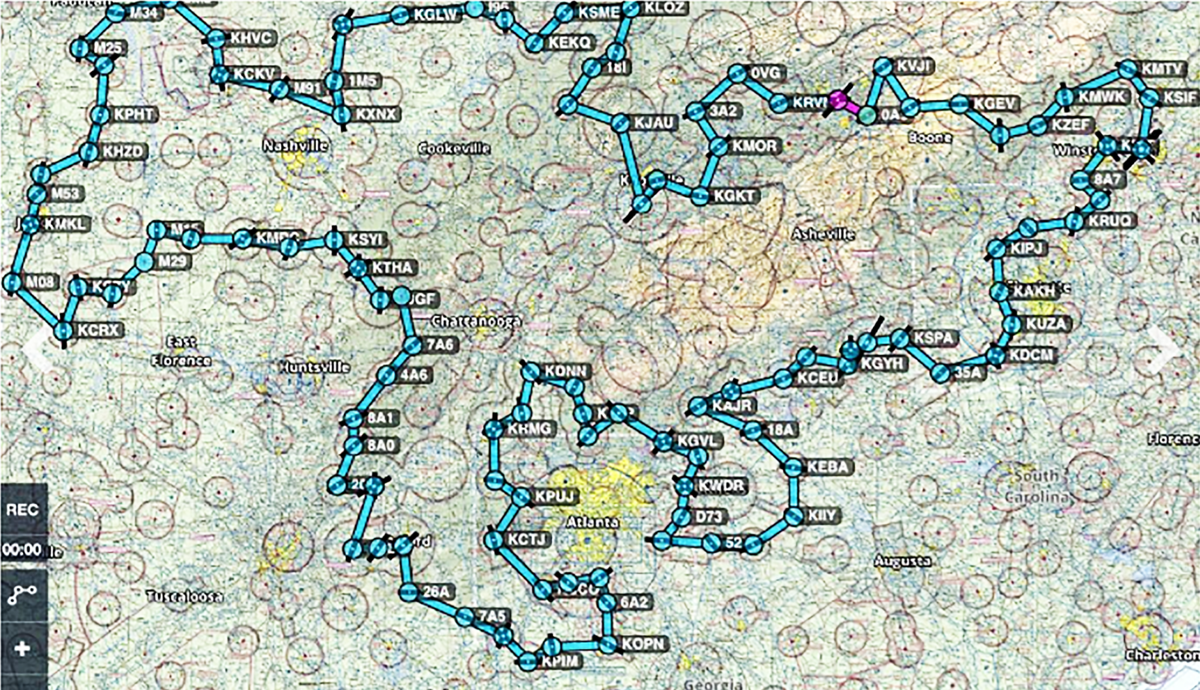 Dan Moore’s record-breaking flight plan included stops at 110 different airports across the Southeast. Moore was only able to make stops at 92 airports including Albertville and Guntersville.

Dan Moore, who is a pilot from Tennessee, landed his Beechcraft Bonanza at the Albertville Municipal Airport on Wednesday at approximately 2:30 p.m. during his record-breaking journey in honor of 9/11. He was able to stop at 92 airports in one day — a Guinness World Record. Once it is made official, Moore’s feat will break the current record for “most airfields visited in 24 hours by a fixed-wing aircraft,” which is 87.

In honor of 9/11, pilot Dan Moore planned to fly his Bonanza to 110 airports in one day, which would break the current Guinness World Record for “most airfields visited in 24 hours by a fixed-wing aircraft.”

On Wednesday, Sept. 11, Moore flew out before sunrise on a record-breaking journey in tribute to the first responders, the fallen and the impact of that tragic day 18 years ago.

“My goal of 110 airports is to pay tribute to the 110 floors of the World Trade Center,” Moore said.

People wonder why he chose Sept. 11, and he said the “best weather day” he could remember was Sept. 11, 2001. It was “totally clear and 65-70 degrees” that day, and he said for flying, there’s nothing better than that. Plus, he said as time goes by, the impact of Sept. 11, 2001, fades. But, he wants everyone to remember that day. He referenced a Bible verse, John 15:13 King James Version (KJV): “Greater love hath no man than this, that a man lay down his life for his friends.” There were many people who did that 18 years ago, and he said people should remember that “truly selfless act.”

Moore’s idea to break a record came from watching TV with his 10-year-old son when they saw a person trying to break a record for the longest walk on Legos. That made him think what record he could break in aviation.

Moore flew his Beechcraft Bonanza with a plan to do a full-stop landing at 110 airports, breaking the current record of 87 airports held by two pilots in the United Kingdom. The route began in east Tennessee, went into Kentucky, Illinois, back into western Tennessee, Alabama, Georgia, South Carolina, North Carolina and then back to his home airport in east Tennessee. He said the Bonanza was perfect because it was small enough to get in all of the airports and fast enough to get to all of the airports in one day.

“You gotta dance with the one that brung ya,” Moore said about why he chose his Beechcraft Bonanza.

To get the initial estimate of 16 hours to accomplish the full 110 airport visits, he said he used Flightplan.com. He said he added 15 minutes per fuel stop, but because of the headwind, his flight was “significantly” slowed down. As a result, he said he was only able to make 92 of the 110 stops, which still beat the previous Guinness World Record. In a “ball park figure,” he said 240-270 gallons of fuel were used during his record-breaking flight. He said it only took around 15 minutes at each of his four fuel stops.

Moore said his Bonanza doesn’t have air conditioning, but he has a unit that turns ice into cool air. It only lasts around two hours though, so it was harder to keep hydrated. He said he drank six Gatorades and nine bottles of water. He had an entire thermos of coffee and a couple of energy drinks, but he “got so busy” that he didn’t drink any of them. In Clemson, he began to use an oxygen tank to breath in “pure oxygen,” and he said that helped him to “keep things going.” In retrospect, he said he should’ve started the oxygen sooner, because it “really helped” him to stay alert.

There were a couple of deciding factors to stop at 92. One, he was getting tired. Two, he said he ran out of witnesses. He said the witnesses were only able to work four hours each, and he didn’t want to keep anyone waiting too long. Originally, he said the trip’s 110 airports would’ve equaled approximately 1,900 total air miles. But, he said the 92 airports ended up being around 1,500-1,600 total air miles. He said he actually made 93 landings over the course of the day, but he forgot to send the Garmin message to log one.

Through Alabama, he said there were “quite a few” storms that caused him to miss at least one airport. He arrived at the Albertville Regional Airport at approximately 2:30 p.m., and just before that, he made stops at the Guntersville Municipal Airport and Scottsboro Municipal Airport. He said he had to miss the airport in Suwannee, Tennessee, where one of his friends was awaiting his arrival. Once he tried to attempt the final approach in Suwannee, he said the air coming from the thunderstorm “came down the ridgeline and right at the airport.” It was “super-bumpy” when he was trying to approach, so he said the decision was made to skip that stop. He said 15 minutes were wasted, but he couldn’t tell the thunderstorm was so close to the airport from far away.

He said his “No. 1 highlight” was all the people that showed up the day of his flight. In Monroe, Georgia — the home of The Reporter’s sister paper, The Walton Tribune — Moore said people held a party at the airport to welcome him. He said there were more than 200 people involved with his record-breaking journey.

“It was a really great day, and I can’t express enough thanks to everyone,” Moore said.

Moore said he “really appreciated” his witness team, who did the paperwork to prove he landed in all of the airports.

Currently, the record-breaking flight is unofficial, but once data from all of the witnesses and cameras is reviewed by Guinness, he said the record would become official. He expects the process to take approximately 12 weeks and become official around Christmas or New Year’s.

Many have asked Moore if he would try it again at a later date, and he said, “maybe.” But, he said it would depend on his wife because “it was tough on her.” Time will tell, but he said as of Sept. 12, it’s a “no for now.” He said he is a “lone wolf,” but if one of his sons decides to fly, he would do it again with them.

46. Franklin County Airport in Sewanee, TN – Skipped due to weather.

88. Greenville Downtown in Greenville, SC (WILL SET A NEW RECORD!!!!)