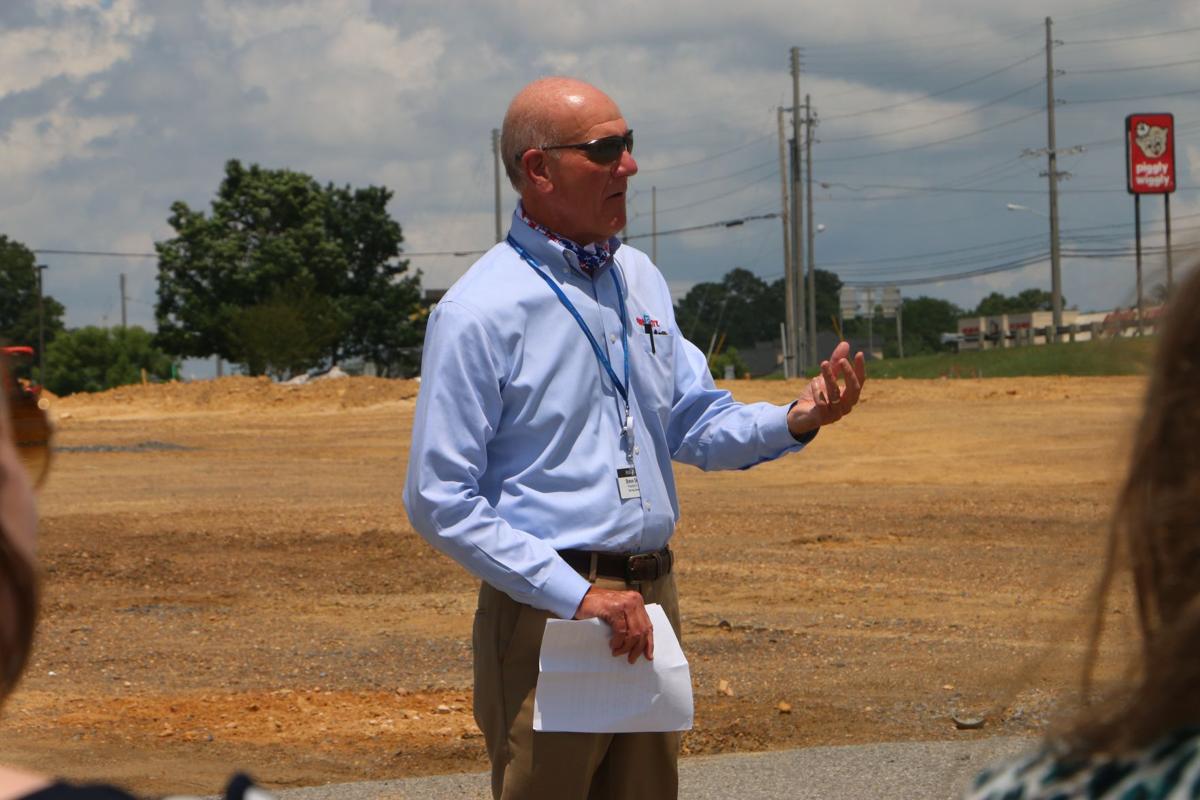 Food City President and CEO Steve Smith announces Wednesday afternoon that Albertville will be home to the state's first Food City supermarket in Alabama, located at the former Kmart property.

Dozens of community members and Food City representatives gather at the site of Albertville Marketplace on Wednesday to celebrate the official announcement of Food City coming to Albertville. 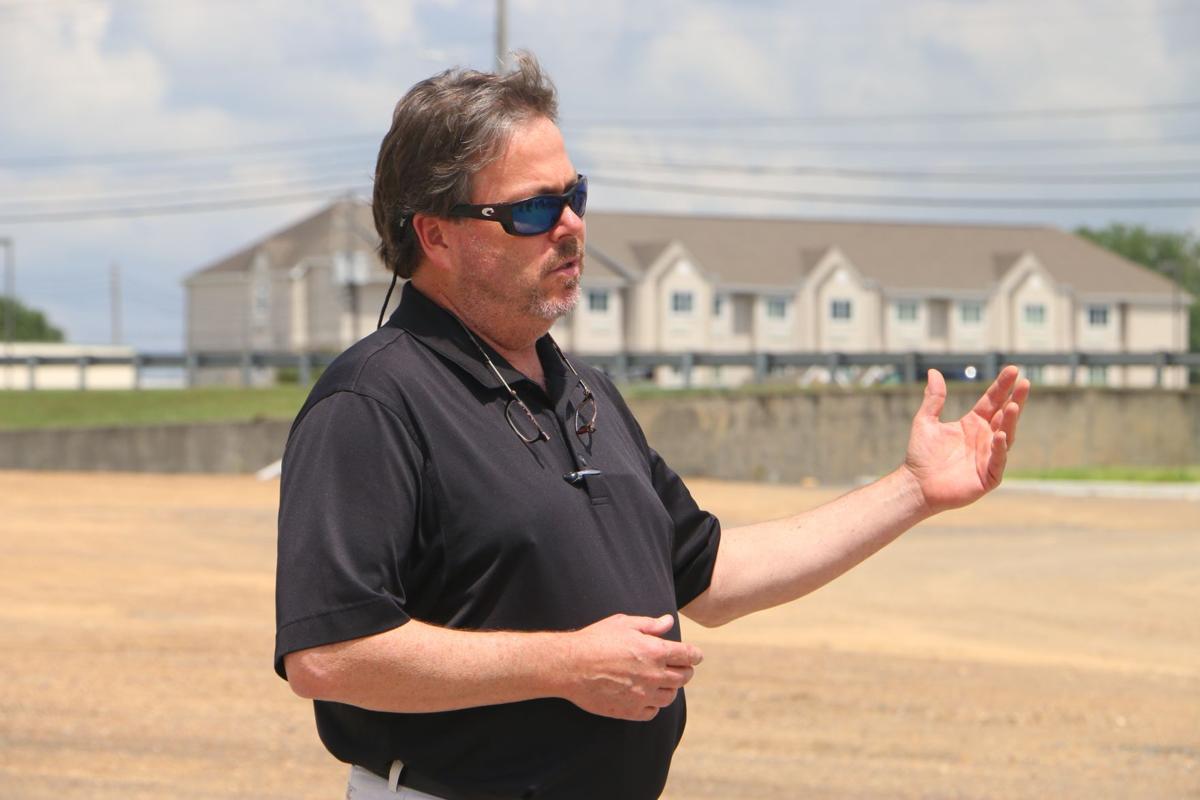 Albertville Mayor Tracy Honea shares his enthusiasm about Food City becoming the cornerstone of Albertville Marketplace. He said other stores locating to the shopping center could be announced later this summer.

Surrounded by local leaders and community members Wednesday afternoon, Food City President and CEO Steve Smith (far left) shares what the City of Albertville can expect to find at Food City when the supermarket opens its doors in 2021.

Food City President and CEO Steve Smith announced Wednesday afternoon that Albertville would be home to the state’s first Food City supermarket, located at the former Kmart property at the intersection of U.S. Highway 431 and Alabama Highway 75.

The 54,000-square-foot store is expected to be one of the largest among the 65-year-old chain and become the cornerstone of the city’s Albertville Marketplace development led by Hutton, LLC.

“This is a superior location,” Smith said. “It’s one [where] we’re going to build you a store that I think all of Alabama can be proud of… We have one mission: run the best store in town ”

Full-service meat and seafood departments offer pre-marinated and seasoned products, plus a complete selection of top-quality meats that are all natural, including certified Angus beef and fresh sushi. In-house meat cutters will hand-cut steaks, chops and roasts to order. The supermarket also offers a huge selection of gourmet, international and hard-to-find items. Smith said Food City would offer a wide variety of locally grown fruit and vegetable products.

Like a number of their locations, Albertville’s store will also include a Starbucks Coffee café, Smith said. Restaurants and cafeteria areas are also options found within several Food City locations.

There will also be a pharmacy staffed for customers’ convenience within the Albertville store and a Gas N’ Go fuel station outside.

Online shopping is also available at Food City through Instacart, as well as curbside pickup.

Smith said the company was thrilled to locate to Albertville and be part of the community. For many years, Food City has been dedicated to giving back to the communities it serves through several programs and events. He said Albertville could expect the same.

“We’re big on giving back to the community,” Smith said. “We know that when the community thrives, our business thrives.”

Food City’s School Bucks Program has donated more than $19.3 million in much needed equipment to its area schools. Its annual Charity Golf Outing has raised a combined total of more than $6.35 million since its inception to benefit area charitable organizations, and the annual Race Against Hunger campaign also provides more than $500,000 in assistance to local hunger relief organizations each year. Its Mission Able project has raised more than $1.67 million in the last nine years to benefit Paralyzed Veterans of America. The company also supports initiatives including United Way, Susan G. Komen, Relay for Life/The American Cancer Society, American Heart Association, Juvenile Diabetes, Second Harvest Food Bank and Feeding America among others.

The supermarket in Albertville is expected to provide up to 160 total jobs for the community, according to Smith.

Smith anticipates construction of the supermarket to get underway later this summer and hopes for an early spring 2021 opening.

When asked how the COVID-19 pandemic has affected the development, Smith said the process had slowed a bit, but there was never any doubt about coming to Albertville.

Karen Hutton, president and CEO of Hutton, LLC, said she was excited to partner with Food City and also praised the leadership of the City of Albertville, saying the decision to purchase and later sell the Kmart property to Hutton was “bold.”

“To work with such a welcoming city … even being a female-owned company, you don’t know what you’re up against and if you’re going to be, in any way, looked at like you don’t know as much because maybe you don’t walk the same walk or look the same as someone else, but we didn’t get any of that here,” she said. “It was nice to see how well [Albertville] Mayor [Tracy] Honea and the council treated us, and how smart they were to go ahead and purchase the Kmart building. I’m telling you, you don’t see many towns and cities make those bold, important moves that can change the platform and the ripple effect this development is going to have for you for many, many years.

“There’s [a Food City] about half-a-mile from my house, and let me tell you, you’re in for a real treat,” Hutton added. “The personnel, the leadership they have and what you’re going to get from employees is nothing beyond spectacular.”

Honea also expressed his enthusiasm for the development and looked forward to its opening.

“I am so grateful to be able to be here and finally be able to get this development truly announced,” he said. “I think everybody is ready to see some progress after what we’ve all been through over these last few months.”

Honea thanked the city council for their role in the development, as well as others among the city’s leadership.

Other retail establishments locating to Albertville Marketplace could be announced later this summer, Honea said.

Food City did not get any tax incentives from the city to locate in Albertville.