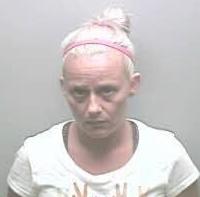 Debord, 37, of Albertville, entered a blind guilty plea Thursday in front of Judge Chris Abel. As part of her plea to three charges, Abel will decide sentencing on Sept. 7.

Debord and Van Christopher Havis, 54, of Guntersville, were charged with sodomy, bestiality and other charges in January 2020 after a video shared on Facebook Messenger showed the pair assaulting an unnamed mentally disabled man and forcing him to perform sex acts on a “domesticated animal.”

Due to the disturbing nature of the case, few details have been released publicly.

She entered a guilty plea to felony counts of first-degree sodomy and sexual torture and a misdemeanor charge of bestiality Thursday. As part of the plea deal, the other six charges were dropped, said Assistant District Attorney Adam Culbert.

Debord will be sentenced on Sept. 7 at 1:30 p.m. She will remain in the Marshall County Jail until sentencing, Culbert said. The sodomy and torture charges are each Class A felonies punishable by up 10 to 99 years or life in prison. Bestiality is a Class A misdemeanor punishable by up to one year in jail.

“Sentences for these charges can run concurrently or consecutively,” Culbert said. “What this plea deal does is give her hope for parole at some point.”

Havis will face trial Aug. 9 for his part in the case, Culbert said.

Prosecutors called the case one of the most disturbing they had ever encountered.  They are especially pleased that the guilty plea means that no citizen from our community will have to serve on a jury and see the repulsive evidence in this case.

“I’ve prayed for the potential jurors in the case,” Culbert said.

“They would have been subject to watching the video evidence in the case. It is horrific to see.”

Bray said the victim was initially taken to a hospital for treatment of non-life-threatening injuries in the attack. He is said to be recovering physically, but psychological effects remain.

In January 2020, concerned citizens contacted the county’s police departments, sheriff’s office and district attorney’s office about an “explicit video” being circulated on social media and text messaging. The video allegedly depicted a “sexual assault that occurred within the county,” according to Marshall County Sheriff Phil Sims.

Investigators were able to obtain a search warrant for a home on Rayburn Avenue and were able to identify Havis and Debord as the alleged perpetrators.