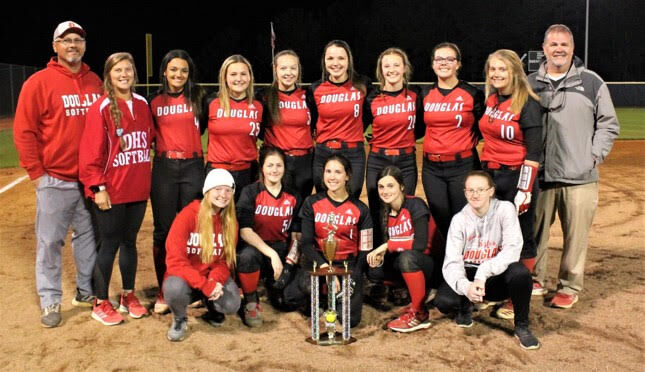 The Douglas Eagles captured the Marshall County title on Monday night, and improved to 12-3 on the season. 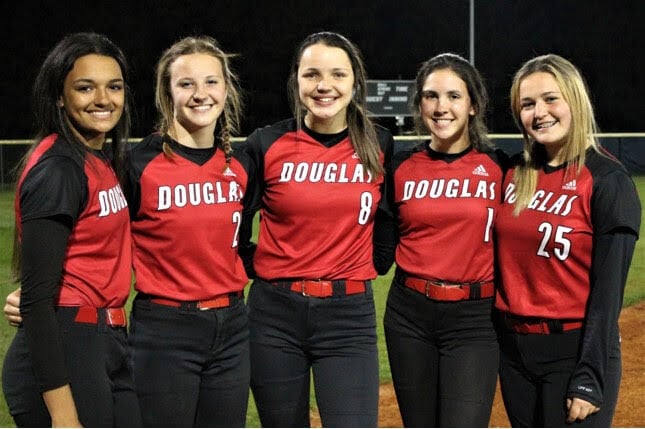 The Douglas Eagles captured the Marshall County title on Monday night, and improved to 12-3 on the season.

Entering the season with just one upper classmen and having to rely on a number of middle schoolers, freshmen, and a lone sophomore fireballer, Douglas softball head coach Johnny Champion wasn’t quite sure what to expect out of his squad during the 2021 season.

Instead, the young team has grown up in a hurry, jumping out to a 12-3 record, and stamping their place among the area’s top teams with a Marshall County Championship on Monday night.

“The start of the year, I had my doubts because we are so young,” Champion said “We have one player over 10th grade, we have one tenth grader, one senior, and the rest are ninth grade and below. So, I thought we would struggled some this year, but the future looks good, I didn’t know the future was going to start this year. We’ve actually been playing pretty good for as young as we are.”

In Monday’s county run, the right arm of sophomore MacKinley Portillo led the way, hurling a pair of no-hitters in the two games, the first a 15-0 shutout of Asbury, then a 5-0 blanking of DAR in the championship game.

Portillo has been the top strikeout artist in the area this season, and in those two games, racked up 24, including 15 in the title game.

“MacKinley is a worker,” Champion said of his young ace. “She pitches, she takes lessons, she plays travel in the summer and fall, she’s worker and has been doing that for years, her work ethic is great, she took the team on her shoulders and goes out there on throws it.”

Portillo was named to the All-Tournament team along with teammates Mallory Ackles and Chloe Green both eighth graders, senior Cheyenne Hamby, and freshman Alexis Clark.

Against Asbury, Green drove in three, Hamby a pair while scoring three times, while Ackles came around to score three times. In the title game, Clark and Ackles both had two hits to lead the way, with Clark swiping a pair of bases as well.

“They’re very athletic, just learning to play the game and learning to play ahead of the game has been the challenge,” Champion said of coaching a squad with this little experience. “I’ve really had to coach this year as far as telling them every pitch and every play what to do, but they’re starting to grasp it and starting to be able to do those things without being told. The biggest thing has just been learning the game and mentally playing ahead, athletically I knew they could do it, it’s just being able to do the little things without thinking.”

With the county title in hand, Champion and the team are gearing up for a busy April, with their sights set on earning the right to host the Area Tournament next month. The team is off to a strong start in area play with a pair of wins over Boaz, but tough games against perennial challenger Sardis remain on the schedule.

But regardless of how the team does the rest of the way, Champion says the team is ahead of schedule from where he thought they would be at this point, with the future looking even brighter.

“We have some tough games down the road,” Champion concluded. “We’ve played Boaz in area and beat them twice, but we still have Sardis to go. In hindsight, our goal is to win against Sardis and host area, but that’s a tough task, and we know that, but we just have to get to work every day. They know that, and they know there’s a lot of improvements to be had. When we walk inside the fence we’ve got to go to work. If we don’t win another game this year, from what I was thinking back in winter, we’ve had a successful season, but I think we’ve got a good shot at moving on to Regionals and the future is really bright.”

Following Tuesday’s game against JB Pennington, the Eagles will face Brindlee Mountain on Tuesday, then will face Sardis on the road on April 15 in a key area showdown.

Wow! This is a great story!