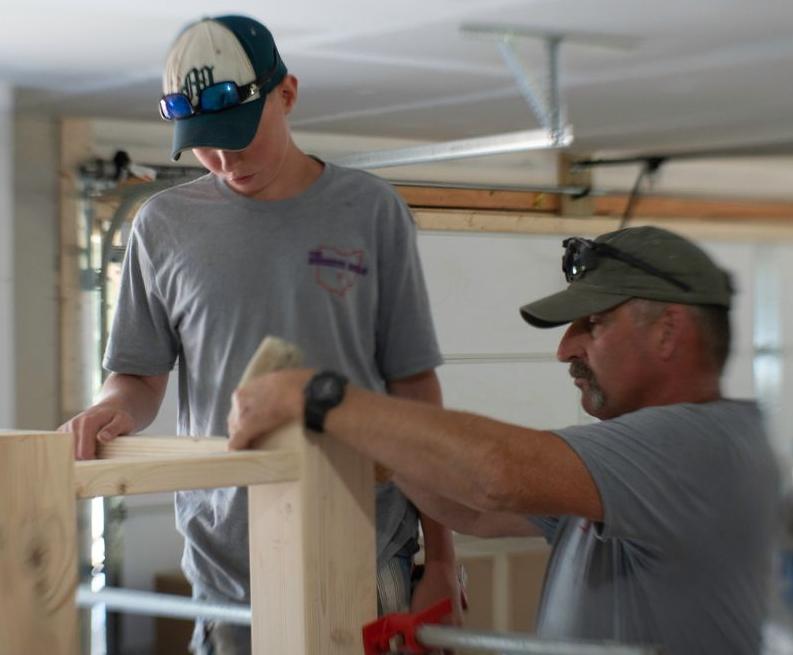 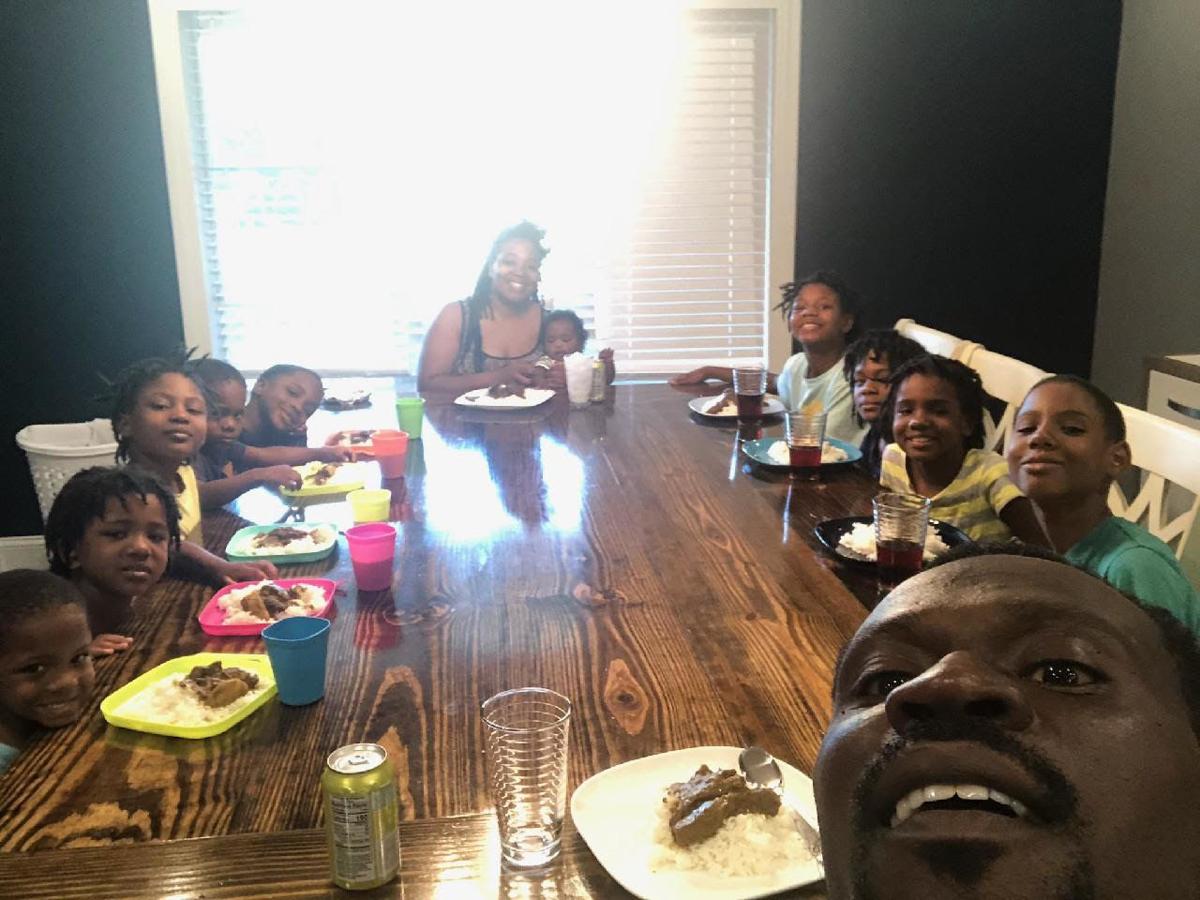 Melroy Cort, bottom right, and his wife, Symantha, top center, pose around the dining table created for them by Albertville Firefighter Mark Hnd. Cort lost both legs during a tour of service in Iraq and received a new home courtesy of two charitable organizations this month.

Albertville Firefighter Mark Hand, center, works with other volunteers with the Soldier’s Journey Home group to construct a new home for Melroy Cort, an injured Marine veteran from Ohio.

Many people spend their annual vacation at the beach, hiking mountain trails or cruising the ocean. For Albertville Firefighter Mark Hand, vacation means helping a U.S. veteran get a new and accessible home.

For the past six years, Hand has travelled the U.S. building homes with A Soldier’s Journey Home, a group primarily comprised of first responders. In conjunction with The Stephen Siller Tunnel to Towers Foundation, a wounded veteran receives a mortgage-free, accessible smart home.

“I have enjoyed being part of this,” Hand said. “Everyone on the team takes a vacation every year to do this. It is really meaningful and moving.”

Melroy Cort, of Pickerington, Ohio, received this year’s home. The young Marine veteran was only 19 when he was deployed to Iraq. He and his wife, Symantha were married just before he left the country.

Four months later, Cort returned to the states without his legs, the victim of an IED blast.

But Cort and his wife persevered and built a family, complete with 10 children now ranging in age from infant to 13.

In 2018, the family’s home was destroyed due to an electrical fire and the family was forced to live in a hotel for over a year.

That all ended June 13 when the 4,000 square foot home was unveiled to the family.

“The family is allowed to be on the build site while we are roughing in,” Hand said. “But once we are closed in and begin working on the inside, the family is kept out. All social media posts stop. We want to keep the inside a surprise for the family.”

Cort and his family were involved in choosing finishes and colors, Hand said. The reveal unveils a fully furnished home.

The newly constructed 4,000 square foot home with six bedrooms is fully accessible and up to Veterans Administration code, Hand said. All doorways and halls are wide, lower cabinetry is deleted from some areas, allowing Cort to roll up to the sink, and the range may be lowered or raised to accommodate Cort or his wife.

The home also features security cameras, automatic doors, a full basement and a backup generator, among other smarthome features.

All new appliances are included, as are furnishings for each room. This year, the volunteers took the process one step further.

“This year we held a raffle. I made a gun safe flag and another volunteer made a flag and we sold raffle tickets to the workers and community,” Hand said. “We raised $1,000. About $300 of that we used to stock the kitchen with food and the rest we had put on a Kroger gift card for the family.”

“We all come here with different talents and skill sets,” Hand said. “I enjoy woodwork and was able to create something unique just for them.”

This year, the group also had a zero-turn lawn mower and a track wheelchair donated to Cort because the home was situated on a large piece of land.

“He had a track chair, but when he was forced to move into the motel, he gave it to another veteran,” Hand said.

Each home is unique and built to meet the needs of the specific veteran and his or her family. Work takes between one to two weeks generally.

“We built a house in Georgia for Sgt. Jason Smith in just seven days,” Hand said. “This time it took us 12.

“We have never missed a deadline. When we say the family is going to get into the house on this particular date, that’s when the house will be done. Sometimes that means we work until 2 a.m. but we make it happen.”

On the Cort’s house, the drywall contractor walked out after seeing the size of the job. Hand said the site supervisor rounded up all the volunteers who could and had them start hanging sheetrock.

“We couldn’t wait to find another contractor,” he said. “Sure, it put us behind schedule, but finding another company could have put us behind by days. And once you get behind, it affects everyone and every workman, from the plumbers to the electricians to the floor guys.”

The community and local businesses rally around the volunteers, providing three meals a day, Hand said.

“A sub place brought sandwiches one day. Another day a pizza place brought boxes and boxes of pizza,” Hand said. “There are churches and local organizations that bring food and drinks and help in any way they can.

“We have one man who came and all he wanted to do was pick up garbage. To me, he’s just as important as the plumber or electricians. Sometimes we get to working and just throw packaging or end pieces of lumber off to the side to deal with later. With someone going around getting all that, it saves us time.”

The Tunnel To Towers Foundation was created to honor Stephen Siller, a New York City fireman who answered the call for help at the Twin Towers on Sept. 11, 2001. Sillers had just left his shift and was on his way to play golf with his brothers when the call came of a plane striking the towers. He drove his truck to the entrance of the Brooklyn Battery Tunnel, but it had already been closed for security purposes. Determined to carry out his duty, he strapped 60 pounds of gear to his back, and raced on foot through the tunnel to the Twin Towers, where he gave up his life while saving others.

Leaders from Tunnel to Tower saw the work A Soldier’s Journey Home did in Tennessee last year, and financially backed the group.

“The partnership went really well,” Hand said. “They vet the candidate and make sure everything is in place and in compliance.

“We only do one build a year because it takes a long time to coordinate all the volunteers and vendors and work crews. There are people working all the time, from dawn to dusk, on these builds.”

Hand said it is not uncommon for insulation to be installed feet in front of drywall crews installing drywall.

“They were coming in behind us just about as fast as we could put insulation in,” Hand joked.

Hand said there is a core group of about 50 first responders from across the country who gather annually at the build sites. They come from Boston to Slidell, La., and everywhere in between, he said.

Although Hand is the only fireman volunteer from this area, State Rep. Tommy Haynes of Jackson County is part of the group.

“He’s a retired firefighter and he comes up and does what he can,” Hand said. “We are the only two from Alabama that routinely go.”

Most of the group members are firemen, retired or active, but a few law enforcement officers also lend a hand.

“I do this because I enjoy it,” Hand said. “Someone said one time, we do something for this soldier who can never pay us back. That’s why we do this. It is really about doing something good for us and for them. We all get something out of it.

“The volunteers work harder on this job than the probably do at their real job. We do whatever it takes to get the job done.”

Hand is also proud of the fact 98.5 percent of the money raised by Tunnels To Towers Foundation goes toward the house. The other 1.5 percent is used to pay liability insurance costs.

“No one on these builds get paid,” he said. “We are all volunteer. We pay for our travel to the site and back. We bring our tools. No one makes a dime.

“But we are able to leave there knowing we have provided a new home that meets the need of an injured soldier and knowing they have incurred no debt.”