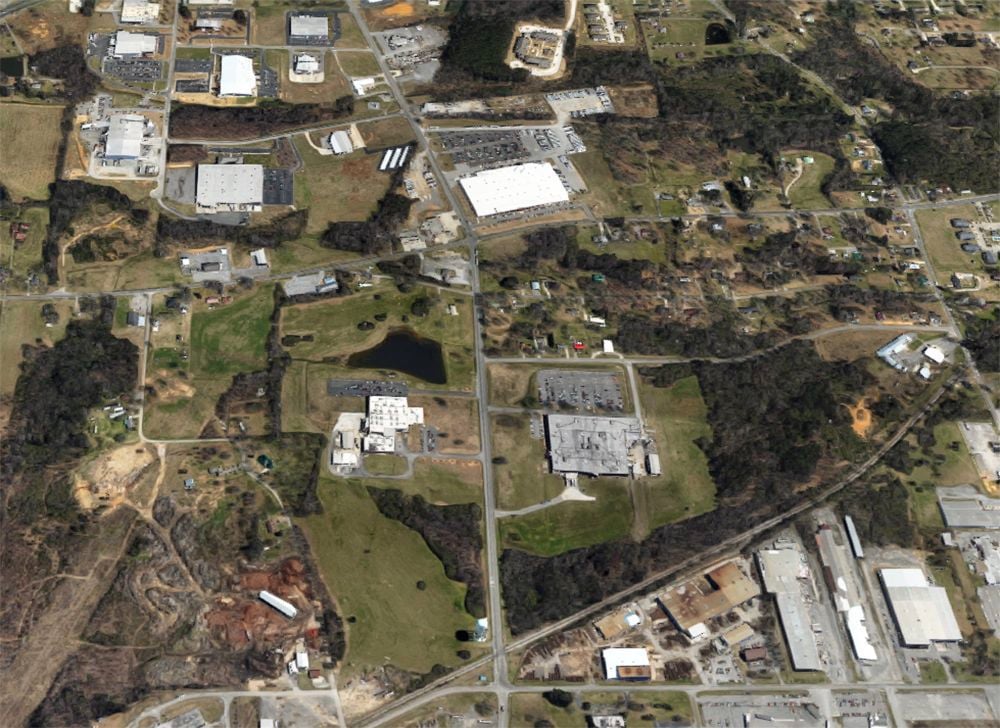 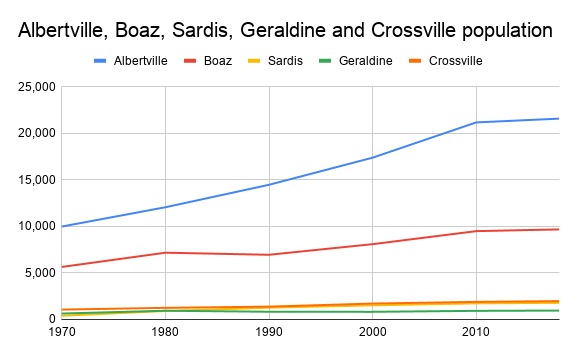 Over the last half century, the Sand Mountain area has grown to include a larger, more diverse population as well as several major businesses and industries.

An aerial photo taken in the late 1960s or early 70s shows Albertville High School and middle school as well as the surrounding community. Albertville’s population was close to 9,963 in 1970.

The year 1970 started a new decade of uncertainty for many people across America. The 60s ended with both triumph and tragedy. NASA had achieved the nearly impossible by placing Neil Armstrong and Buzz Aldrin as the first men on the moon. Back on earth, tensions mounted during President Richard Nixon’s term in office as the Vietnam War raged on into its fifth year. The “summer of love” officially ended with the grisly murders of Sharon Tate and her house guests by the Manson family at Cielo Drive in the Hollywood hills. The age of Aquarius that was to usher in a new era of enlightenment and utopia had taken a cultural turn for the worse.

However, life on Sand Mountain was beginning to flourish. Over the next 50 years, the counties, cities and towns would grow in terms of population, economics, industry and diversity. Marshall County, which had an approximate population of 53,962 people in 1970 according to U.S. Census data, now holds more than 95,548 people; an increase of 77%. DeKalb County grew by nearly 74% over the same period, from 41,191 residents to more than 71,617.

Both counties’ growth rate in the last half century outpaced the state of Alabama and the U.S. as a whole, which saw an approximate growth rate of 42% and 59%, respectively. According to census data compiled by the U.S. Census Bureau, the population of Albertville in 1970 was approximately 9,963; Boaz, 5,621; Sardis City, 368, Geraldine, 610; and Crossville, 1,035. Fifty years later, the cities have grown to include 21,568; 9,656; 1,763; 929 and 1,945 residents, respectively, based on 2018 data. Among the key factors contributing to the overall growth of Sand Mountain, the two most significant have been industry and immigration.

While poultry processing has been a major manufacturing industry, other out-of-state business started to move into the area starting in the mid 70s to early 80s, bringing more jobs for the current residents of Sand Mountains and attracting many outsiders. Parker Hannifin opened in Boaz in 1981, Mueller Hydrants in Albertville in 1975 and Progress Rail in 1982, which are a few examples of outside industries that have become prominent employers for a significant part of the local population.

“Because the mayors of Albertville and Boaz worked together, they developed that industrial park … and it kind of makes me think of [Albertville] Mayor [Tracy] Honea and myself today,” Dyar said. “We actually try to work together as much as we possibly can, and I think that’s why good things are going to happen as far as industry in the future.”

“It’s still got the small-town atmosphere that we’d like to keep,” Sardis City Mayor Russell Amos said of his town. “At one point in the 2000s, we were one of the five fastest growing cities in Alabama.”

“It’s like Mayor [Kenneth] Brand when I first came on the council used to say, we’re in between,” Amos said. “We’re too little to be big and too big to be little. You experience those growing pains a lot of times. From where we started when I took office three years ago, I think we’ve come a long way.”

In DeKalb County, Geraldine Mayor Chuck Ables said the installation of the four-lane road through town and a new Liberty Bank in 1971 began to attract more business to the small town.

“The cotton gin and feed mill closed, and since there was more traffic on [U.S.] Highway 75, it became the obvious area to start or grow a business,” he said.

D&F Equipment in Crossville got its start in the late 80s and has grown to be one of Crossville’s largest industry employers.

Sand Mountain’s convenient location being near several major metropolitan areas and Marshall County’s two airports, four major four-lane highways, ports on the Tennessee River, access to rail and close proximity to three major interstates have been major factors in attracting new businesses. That, combined with low cost of living and favorable climate has also enticed many people from out of state, be they from the North looking for warmer weather or immigrants looking to get their start in America.

In 2000, Marshall County grew by nearly 16% since 1990, making it the 13th fastest growing county in the state at the time. A large part of the growth was due to immigration, specifically a growing number of Hispanic residents.

The 1990 census listed 289 Hispanic residents in Marshall County. The 2000 census showed 4,656 Hispanic residents. At that time, approximately 76,000 Hispanics were recorded as living in Alabama, which was about 1.7% of the state’s population. Hispanics made up 5.7% of Marshall County and 16% of Albertville’s population, according to the census results reported by The Reporter. Hispanics in DeKalb County made up 5.55% of the population in 2000. The percentage increased to 13.6% in 2010. Based on 2019 census data, DeKalb County’s Hispanic population now is close to 14.8% of its total population, while Marshall County is 14.3%.

Louise Radanovich and Danny Maltbie, who volunteer at the Albertville Museum, said that the influx of immigrants helped to rejuvenate parts of the city, specifically dying communities and the downtown area in Albertville.

“The influx of new blood has rejuvenated many fading small towns,” Radanovich said. “A part of the economic rejuvenation of Albertville is Hispanic.”

Along with its many benefits, growth often brings its own set of challenges.

“You want to try to do things that benefit the most people,” Amos said. “Progress is always good, but there’s somebody who is adversely affected.”

Many people who commute on U.S. Highway 431 each day experience one of those challenges first hand.

“Traffic flow is a big problem that I think [every city] is trying to address,” Honea told The Reporter. “When you talk about U.S. 431, we obviously need some kind of relief … but that’s what happens when you have a lot of folks out on the road and a lot of businesses located in the area. It’s tough, but it’s also a good problem to have.”

A combination of lower immigration, Americans moving less (fewer than 10% of citizens relocated in the 2018-2019 year, the lowest rate since the Census Bureau began tracking domestic movements in 1947, according to axios.com) and larger cities siphoning off new blood has caused growth in Sand Mountain to stagnant and even slightly declined in recent years.

Still local municipalities maintain a bright outlook on the future and are doing what they can to draw in more business and in turn, more residents. In Jan. 2019, Albertville broke ground on the new Sand Mountain Park and Amphitheater, a 129-acre recreation complex complete with an indoor pool, ball fields, walking trails, water slides and more.

“We designed this park to be a boost to the economies of all of Marshall County as well as Albertville by making sure we have the perfect balance of athletics and community designed facilities,” John Chambless, of Chambless King Architects, told The Reporter.

Boaz, too, began construction on a recreation center in September 2019.

“It’s another step,” Dyar said. “We’re taking those steps to make our community a place where somebody would want to raise their children. It’s just another investment — I know I’m redundant when I talk about this, but look, this should’ve been done sometime before now. I’m just thankful I’ve got a good council to work with.”

Dyar said Boaz is still trying to “dig itself out of a hole,” and he believes the new recreation center along with other developments will help do just that.

“I think we’re making progress,” he said. “There’s hope and there’s opportunity in this city. I think you’re seeing Boaz evolving to the next stage. One of the biggest words in the English dictionary is ‘atmosphere.’ To me it’s about creating that positive atmosphere. I think it’s happening in Boaz.”

This past January, Geraldine finished the installation of a new sewer system for the town, a major project which Ables hopes will open up more business prospects.

“It took many years of planning and securing grants to allow this project to become a reality,” he said. “Having sewer will allow us to attract business that otherwise would not consider coming here. These things do not happen overnight as most businesses plan expansion months or even years ahead, and with the sewer just being completed, it could be a while before some of the benefits are realized.”

“In 2020, there are certainly challenges ahead for our city, just like there are for every one of us,” Amos said. “But we must remember that with God nothing shall be impossible.”

While many counties in Alabama are seeing their population and economies decline, most of Sand Mountain is remaining steady and is projected to slightly increase in population for the 2020 census.