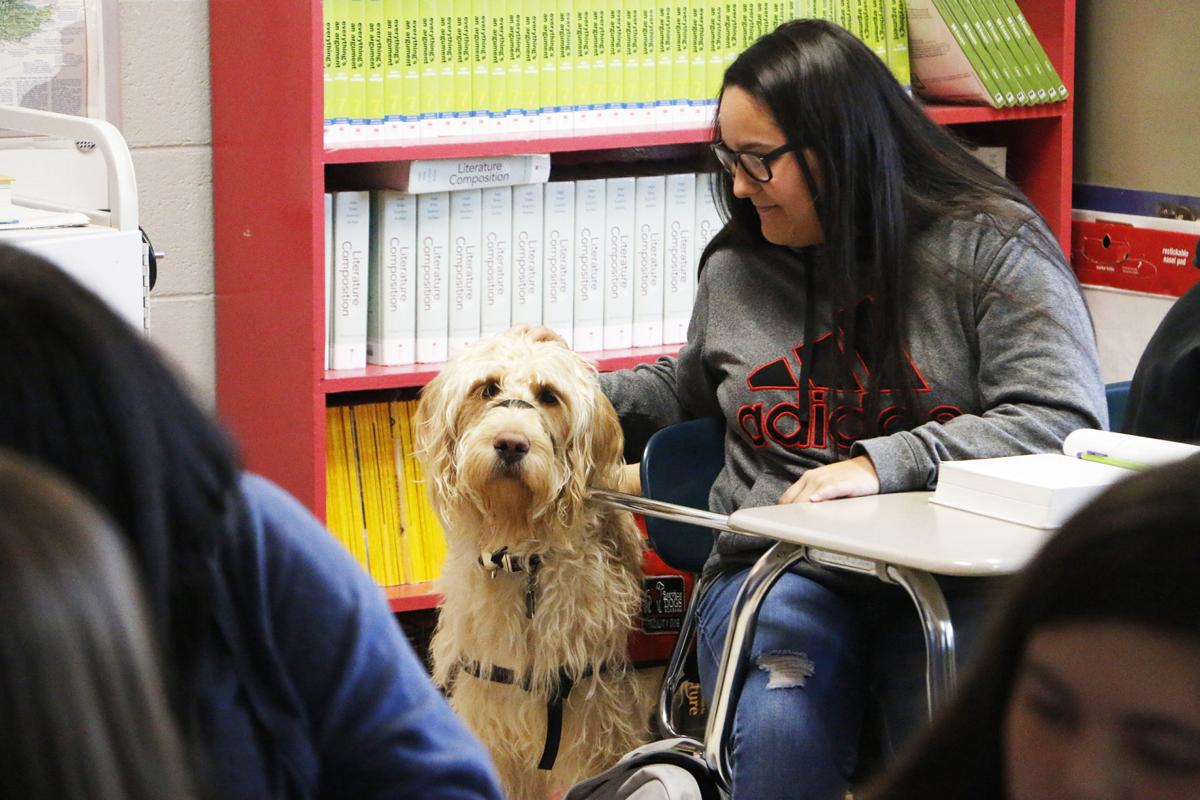 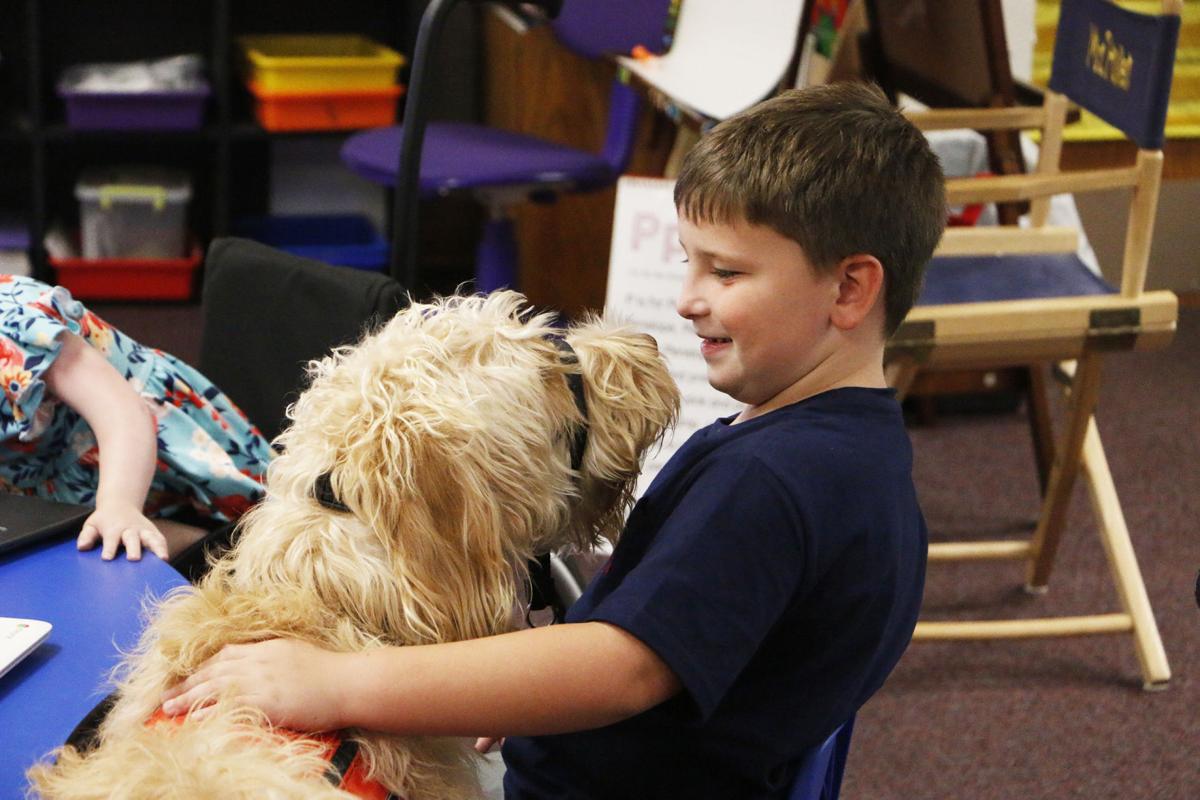 Tate Pounds, of Boaz Elementary School, gets a little attention from Sully. Sully’s handler, Juddie Walker said if a “kid feels like they can connect to him, or if they pet him and feel some kind of support or unconditional love a dog gives, then he’s done his job.”

As he steps into the classroom, the golden doodle garners a smile from every student in sight.

Sully, Boaz City Schools’ facility dog, has been getting a lot of attention from high school and elementary students, and he’s become quite the celebrity, according to handlers Josh and Juddie Walker.

Josh is the principal at Boaz Elementary School and Juddie is the library media specialist at Boaz High School. Juddie said everyone has been happy to see them so far this school year, but only for the puppy that’s usually tagging along.

“Josh and I have said we’ve kind of become the invisible person,” Juddie said. “I’ve become pretty popular around here but not because of me. It’s because of him. Everybody wants to see me because they think Sully will be with me.”

“We were at the lake the other day and a couple of students were up there too,” Josh said. “The first thing they said was: ‘Hey, where’s Sully?’”

Sully was welcomed to the Boaz City Schools System in July. As an official member of the faculty, Sully’s job is to reduce stress in the classroom, during counseling sessions or during testing; create opportunities for inclusion and participation for all students; and deflect any opportunities for conflict and diffuse defiant and disruptive behaviors, according to Juddie. As a member of the staff, some high school students have already petitioned to get Sully’s picture in the yearbook — Juddie said she would make it happen.

Though Sully has only been around campus for a couple weeks, students across the district have already fallen in love with the 3-year-old.

“Everybody loves him,” Jade Galvin, Juddie’s library aide, said. “Whenever they hear that he’s coming to the classroom, everybody starts talking about it as soon as class starts — just waiting for him to come in.”

Sully can be found each day roaming from class to class, visiting students. Josh said when it’s time to “visit,” Sully decides where he wants to go. He can detect who within the classroom is anxious, stressed out or simply having a bad day worrying about things outside school. Students are not allowed to call after him or pet him in the hall, unless it’s a one-on-one situation and the student gets permission from Josh or Juddie.

The Walkers have already witnessed Sully being a help to students who come from a poor home life or are currently dealing with difficult situations. That’s when Sully shines brightest.

Above all, Juddie said she feels like the entire campus has felt different since Sully came aboard.

“Right now it’s just brightening their moods — letting them be excited about something, making it more enjoyable,” Juddie said. “I think it’s just been a positive reason to be here at school … Every kid at this school has some kind of stress that they’re dealing with. And if he’s there to help them feel better, or if that kid feels like they can connect to him, or if they pet him and feel some kind of support or unconditional love a dog gives, then he’s done his job.

“Sometimes he’ll put his head in your lap, sometimes he’ll just lean on you a little bit or he’ll just lay at your feet,” she added. “They said to give him about six months before he really starts to settle into his role … but he’s done great so far.”

Juddie wants parents and other community members to understand that although she and Josh are Sully’s handlers, he isn’t their pet. And, he’s been training his entire life to be a facility dog — he is the first to be stationed at a school in north Alabama.

“I’d love to just keep him in my office all day to myself, but that’s not what he’s here for,” Juddie said. “He’s their dog. He’s here for [the students].”

Boaz Superintendent Todd Haynie said he was thrilled to have Sully at Boaz and looked forward to how helpful he can be to students in the future.

“He’s amazing,” Haynie said. “What a great resource for our kids. A lot of other schools aren’t as fortunate to have a Sully. When you see Sully go to different classrooms and the kids just kind of gravitate toward him, it just makes them feel at ease, and I just look forward to the possibilities.”

Poll: How have you adjusted to attending religious services via online or drive-in?