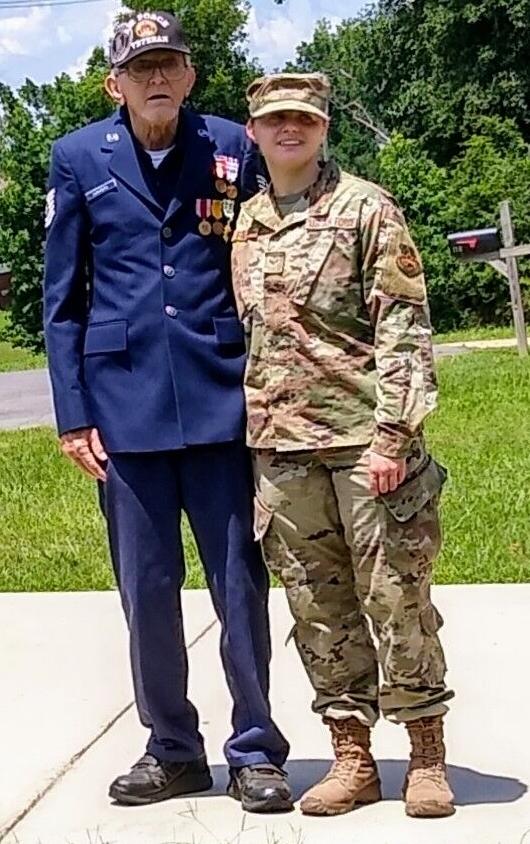 Members of the community along with local first responders gathered at Farris’s home to welcome her back from a deployment in Qatar with the 117th Refueling Wing unit of the Alabama Air National Guard.

Residents of the Shepherd’s Ridge community in Sardis City welcomed home Airman Brianna Farris (center) after she had been deployed in Qatar for nearly six months.

The Shepherd’s Ridge neighborhood in Sardis City had its own miniature parade Sunday, July 26, as residents and local town leaders turned out to welcome Airman Brianna Farris as she returned home from a nearly six-month-long deployment in Qatar.

The local fire department and police department in Sardis City as well as deputies with the Etowah County Sheriff’s Department and at least one member of the city council attended the event along with many neighbors who had their American flags prominently displayed on their homes.

“They sacrifice so much, our military does,” Farris’s mom, Tina, said. “I just thought it would be nice to show her how much we appreciate them. We have a great neighborhood. A lot of the neighbors put out flags in her honor and even one of the little kids drew a picture for her. It was just sweet.”

Neighbor and friend Helen Hancock played a major role in organizing the event by reaching out to city officials and departments. She said she was thrilled by the turnout.

“They came in Sunday sirens blazing, which was great,” Hancock said. “It was something. A lot of us had teary eyes.”

Hancock said her dad, who served in the Air Force, put on his uniform before welcoming Farris home.

“It’s a good way for the community to thank our soldiers, especially during this time,” she said.

For the past 193 days in Qatar, 24-year-old Farris had been working as a medic with the 117th Refueling Wing unit of the Alabama Air National Guard. Having previously served in Guam, this was her second and longest deployment since joining the air guard.

“It feels so good to be home,” Farris said. “I love seeing green grass and trees. It’s like Christmas. I did not expect such a welcoming and feel proud to be part of this community.”

Farris plans to continue her classes at University of Alabama at Birmingham starting at the end of August. She’s recently taken a full-time position with the air guard in Birmingham, her mother said.