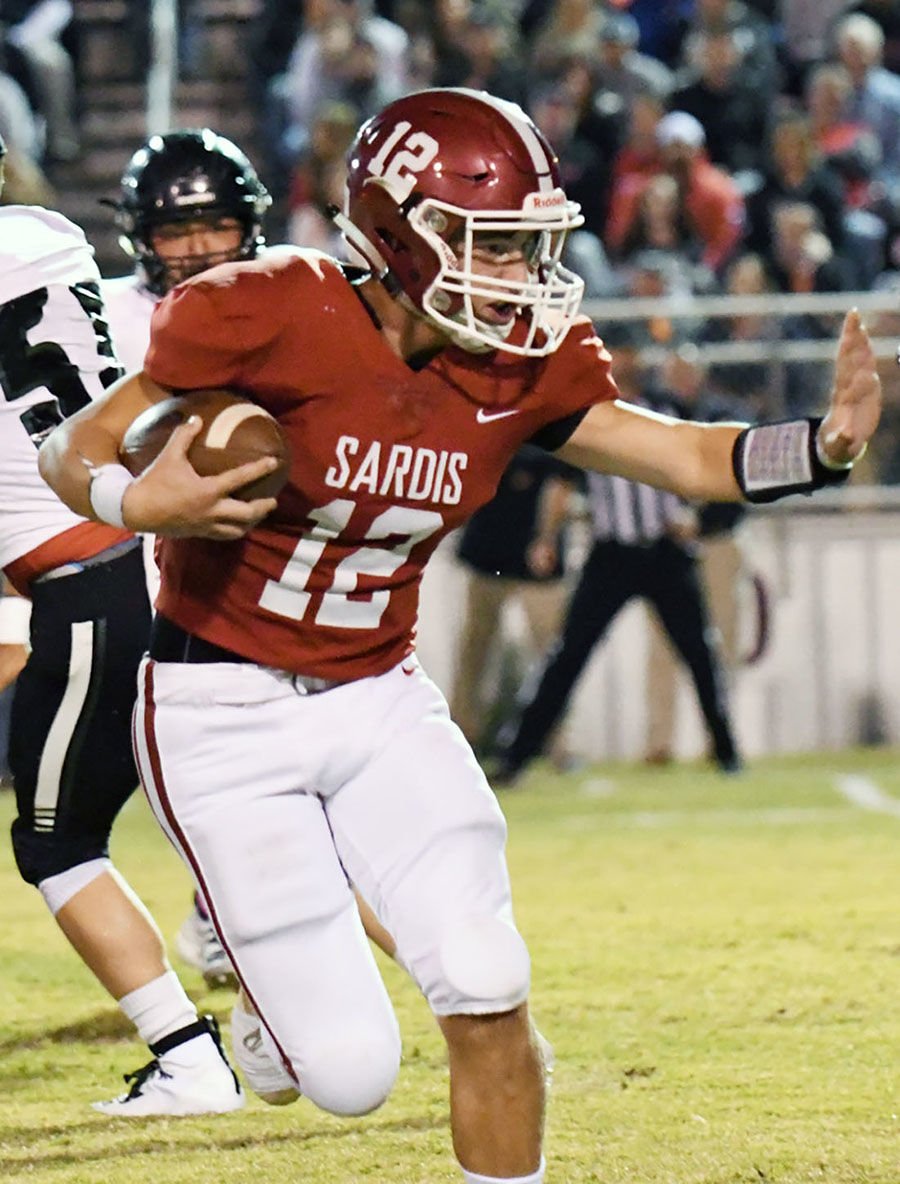 Head coach Gene Hill said Brody Samples, a junior, is the favorite to be Sardis’ starting quarterback during the 2020 season, which starts Aug. 28 at Sylvania. 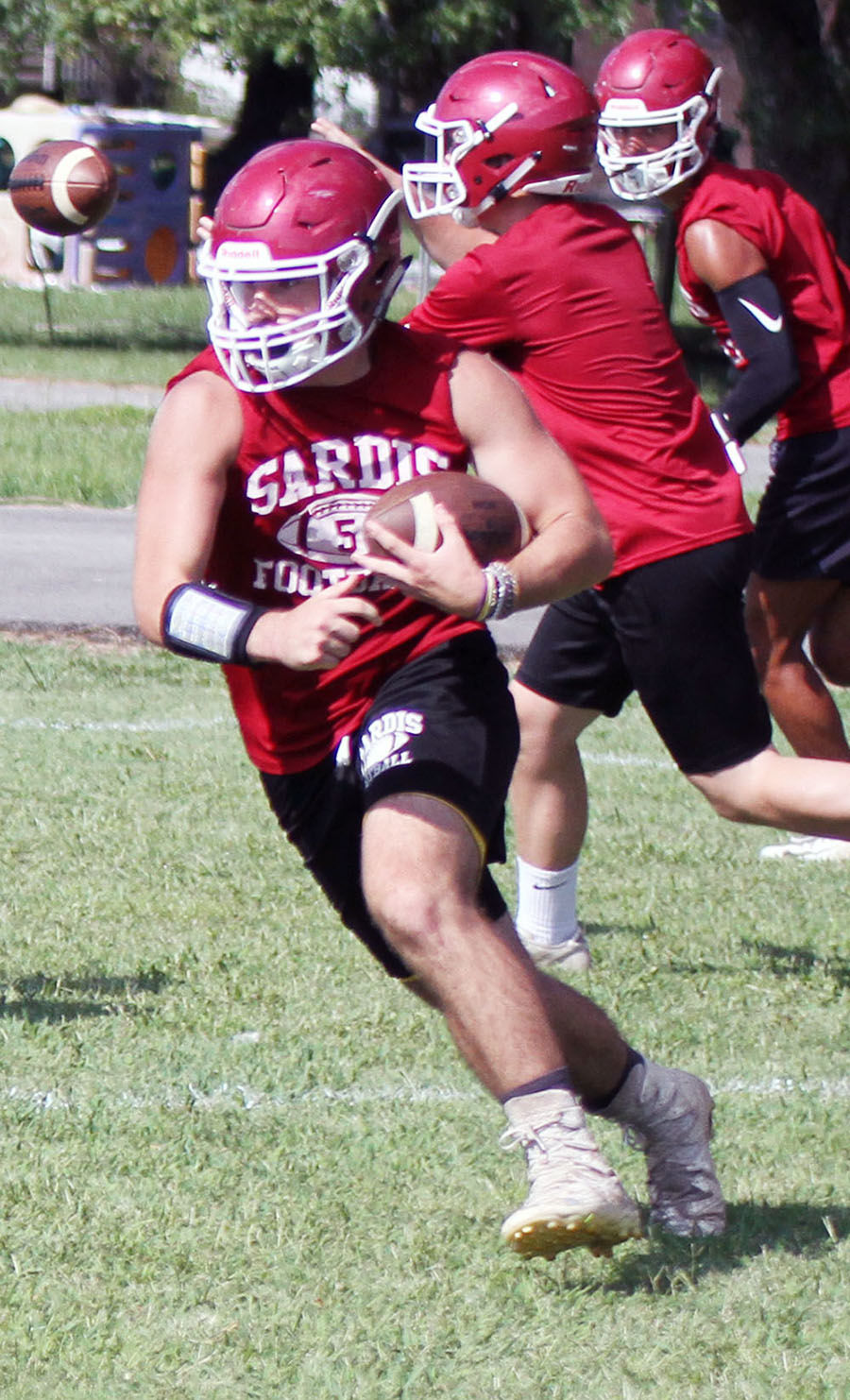 Logan Edwards, a junior, returns at running back and linebacker for the Sardis football team.

Head coach Gene Hill said Brody Samples, a junior, is the favorite to be Sardis’ starting quarterback during the 2020 season, which starts Aug. 28 at Sylvania.

Logan Edwards, a junior, returns at running back and linebacker for the Sardis football team.

The student-athletes reunited with their teammates and coaches for the first time since the coronavirus pandemic stopped on-campus classes and all extracurricular activities in mid-March.

Sardis head football coach Gene Hill said it’s customary for all male student-athletes to work out together in the summer. The Lions have been divided into groups to help maintain social distancing. Groups are working out Monday, Wednesday and Friday mornings at 9 and 10:15, along with Tuesday and Thursday nights at 6 and 7:15.

“I think the first two days we had a total of 71 who worked out,” Hill said. “I feel like it’s working good.

Teams can start preseason practice July 27, instead of the traditional first Monday in August, and Hill said the Lions would.

“I have no doubt we’ll have plenty of time to get everything in that we need in, especially with that extra week, and then head toward the jamboree game,” he said.

The Lions will host Glencoe in a fall jamboree Aug. 21. Their season opener will be Aug. 28 at Sylvania.

Sardis posted a 5-6 record in 2019, including victories over rivals Crossville and Boaz and its first win over Southside in 44 years. The Lions also earned their first state playoff berth as a Class 5A program.

“We’ve got a lot to replace,” Hill said. “We had a big senior group. I always feel like spring, and I’m not a great fan of spring, but I think you need a few days to see the new guys and kind of see what they can do. You can kind of get those plans in your head who’s going to be where, and where you need to work them during the summer.

“So, that was the biggest thing we missed, but we’ll get that figured out. I don’t think it’s that drastic, and we’ve kind of got an idea where guys can go.

Brody Samples, a junior, is the favorite to take over at quarterback for Jay Owens, who graduated after starting for two seasons.

“Brody played in some varsity games and quarterbacked all the JV games, and he played defense last year,” Hill said. “I don’t know how much defense he’ll play this year.

“I feel comfortable with him. I know what he’s capable of. He throws the ball fairly well and is real competitive. I think his feet are going to be more of an asset for us this year, because he can run the ball pretty good. That will give us another dimension there.”

“Torin Bright played a pretty good bit, and we’re looking for him any moment to have a breakout year, because he has so much ability,” Hill said.

“Peyton Wehrwein decided to come out and play last year and was probably the biggest surprise on our team. He wound up being a really good football player. He played safety and did a lot better job than I ever thought he could do over there. He was one of the better safeties around.

“He also played receiver, and I think you’ll see him on the field on both sides of the ball a good bit.”

On the offensive line, senior Jackson Burns returns after starting at tackle a year ago. Garrett Howington is a senior who earned some starts at guard.

“Most of our linebackers are back, and we’re pretty solid there,” Hill said. “We have Logan Edwards, Jacob Smith and Sean Wright, who hurt his knee the first ballgame. He was a starting linebacker.

“We’ve got some guys that haven’t played, some older guys, who I’m hoping are going to come out and play that we know can help us.

“This freshman group we’ve got, there’s 30-something of them. They haven’t missed a workout and they’re so impressive.”

Jose Ponce and Blake Butts are two freshmen linemen who practiced with the Lions late in the 2019 season.

“Both of them have an opportunity to play as true freshmen,” Hill said. “They’re pretty strong kids and big kids.

“I’ve played freshmen before. When Brayden Lacey and that bunch was here, [Anthony] Coffey and some of them played as freshmen. I just don’t like to have the majority of the team being freshmen. Some of them are going to have an opportunity to fill in some gaps.”

Sardis also retained Sylvania, Geraldine, Southside and Hokes Bluff from its 2019 schedule. All are nonregion opponents.

“We’ve played Fairview before,” Hill said. “Of course, we’ve played Guntersville when we were 4A. I’ve never been to West Point. That’s going to be our longest trip.

“Boaz, Crossville, Douglas and Guntersville should be big games for all of us. As far as the region goes, we’ve got some good gates.”

Hill said financial reasons aren’t the only factor in scheduling but they must be considered, citing as an example the small visiting crowds the Lions hosted when they competed in a 4A region that included Madison Academy, Westbrook Christian and Randolph in 2016 and 2017.

“That’s part of the reason we keep playing Geraldine,” he said. “They’re a good football team year in and year out. It’s probably their biggest gate when we play them, and it’s one of our bigger gates when they come here.

“We’ve just opened up with Sylvania for so many years, and a lot of times it’s hard to find a week one game. Coach [Matt Putnam] wanted to do that so we just kept doing it.