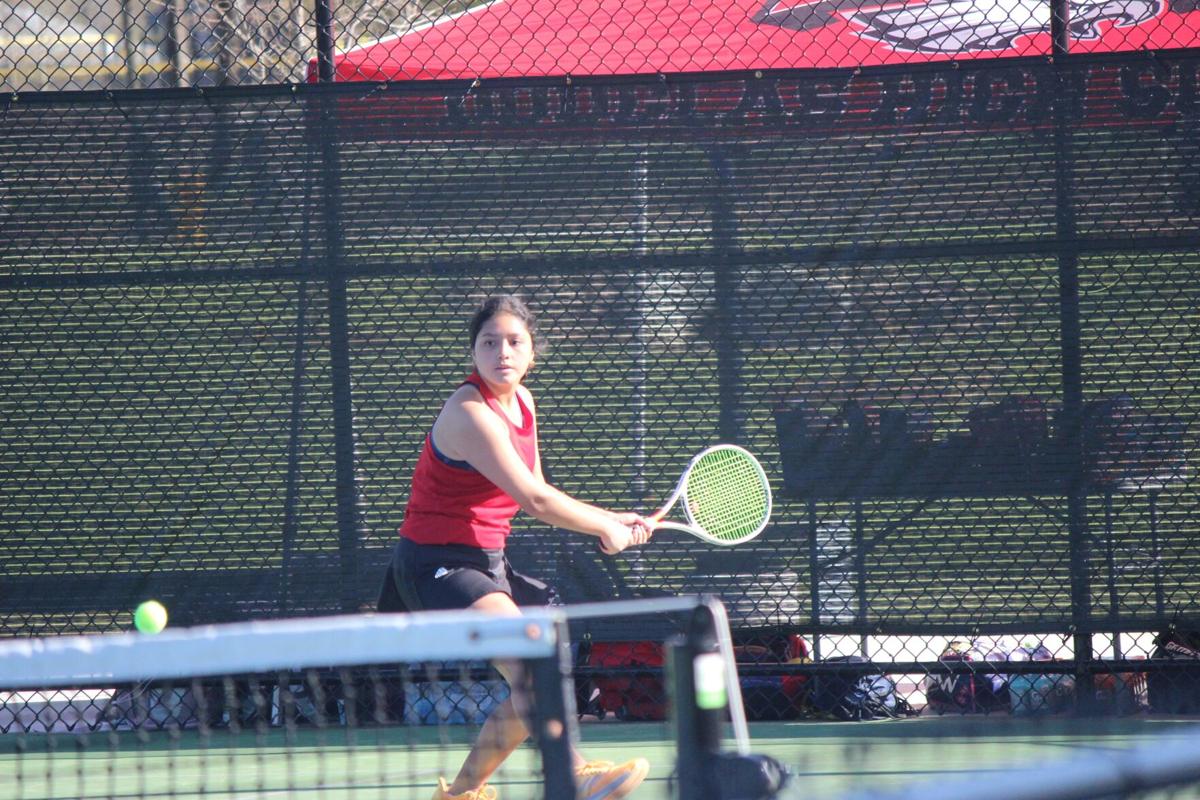 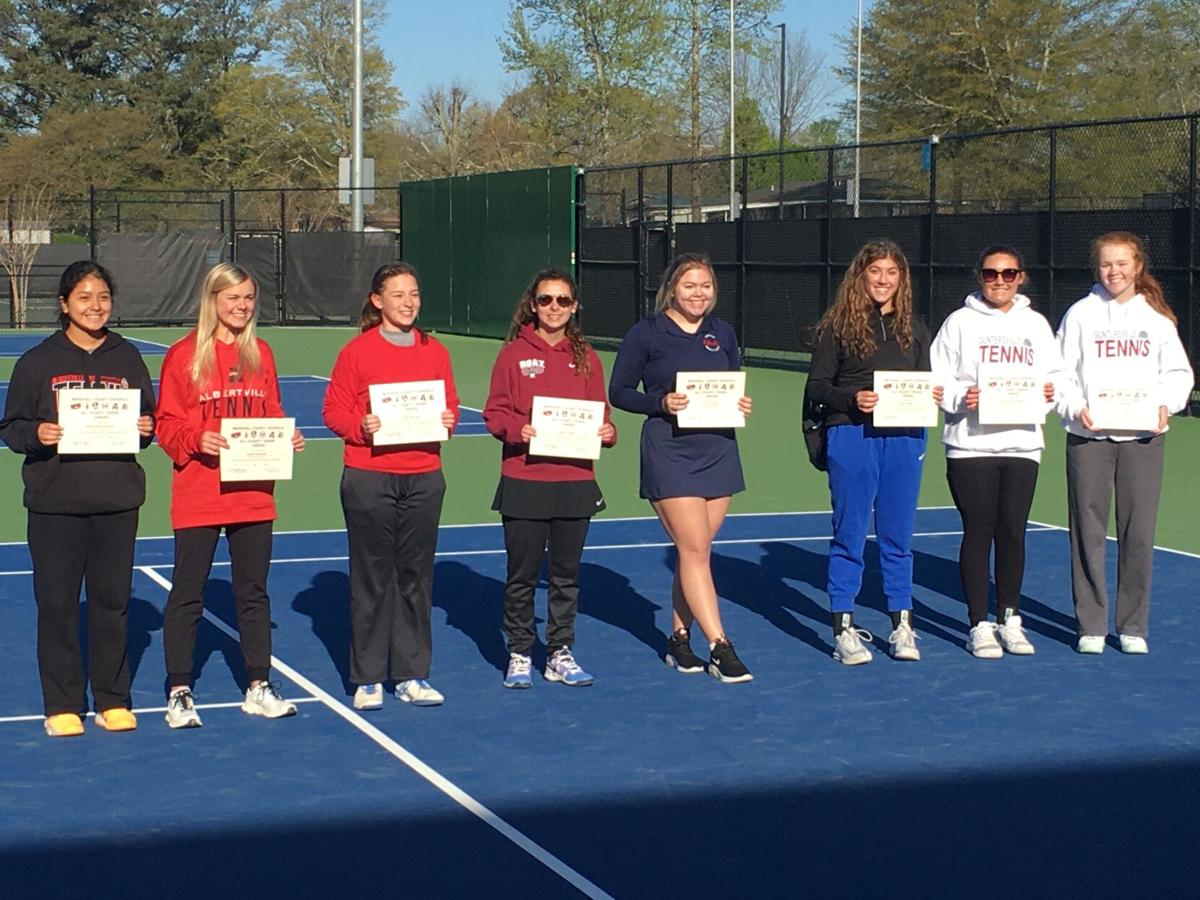 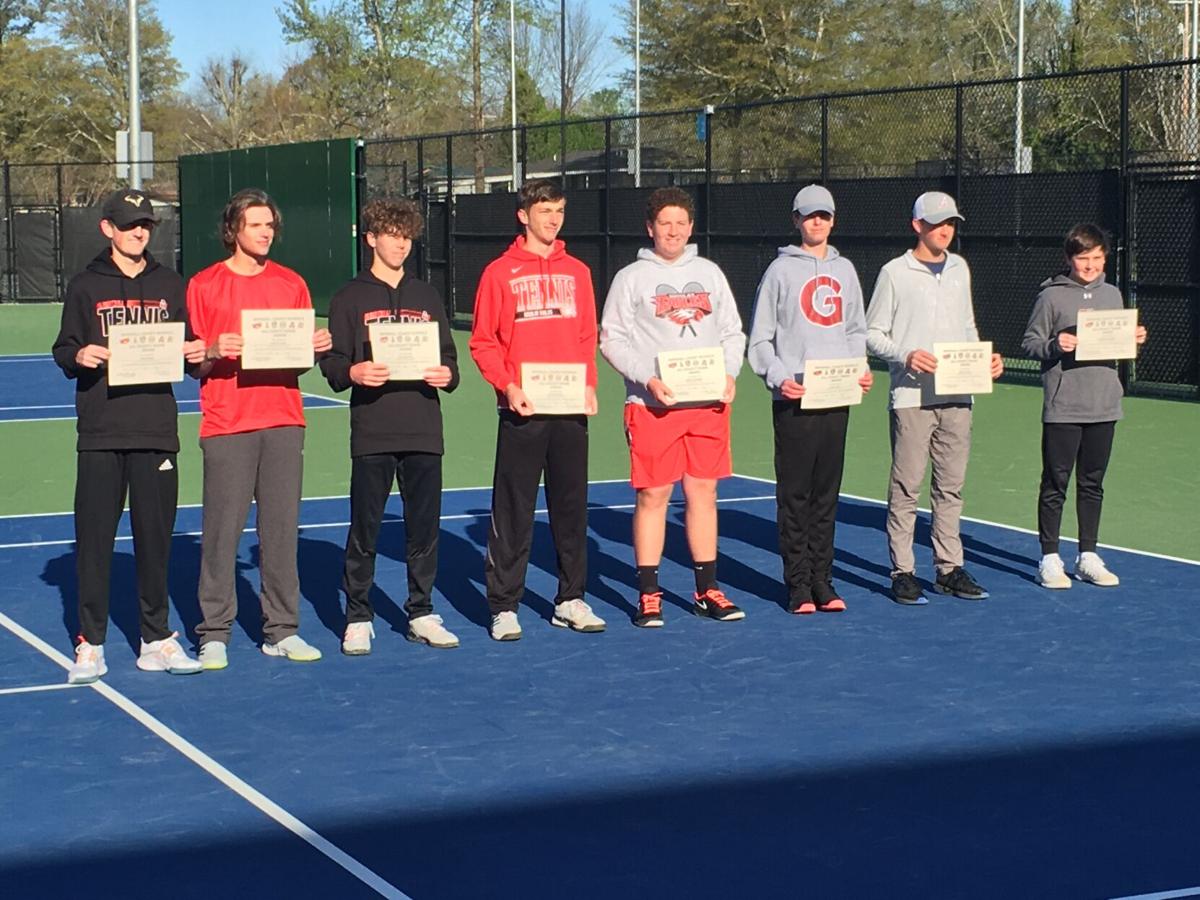 From left to right, the members of the 2021 Marshall County Boys All-County Tennis team are honored follow the conclusion of the annual Tournament. Albertville captured the boys’ title in convincing fashion. Members of the All-County team are: Lane Young, Curtis Richey, and Sam Bartcliff of Albertville, Masen Howard and Wesley Hawkins of Douglas, Elisha Sims of Guntersville, Lance Clark of DAR, and Anderson Lambert or Boaz. 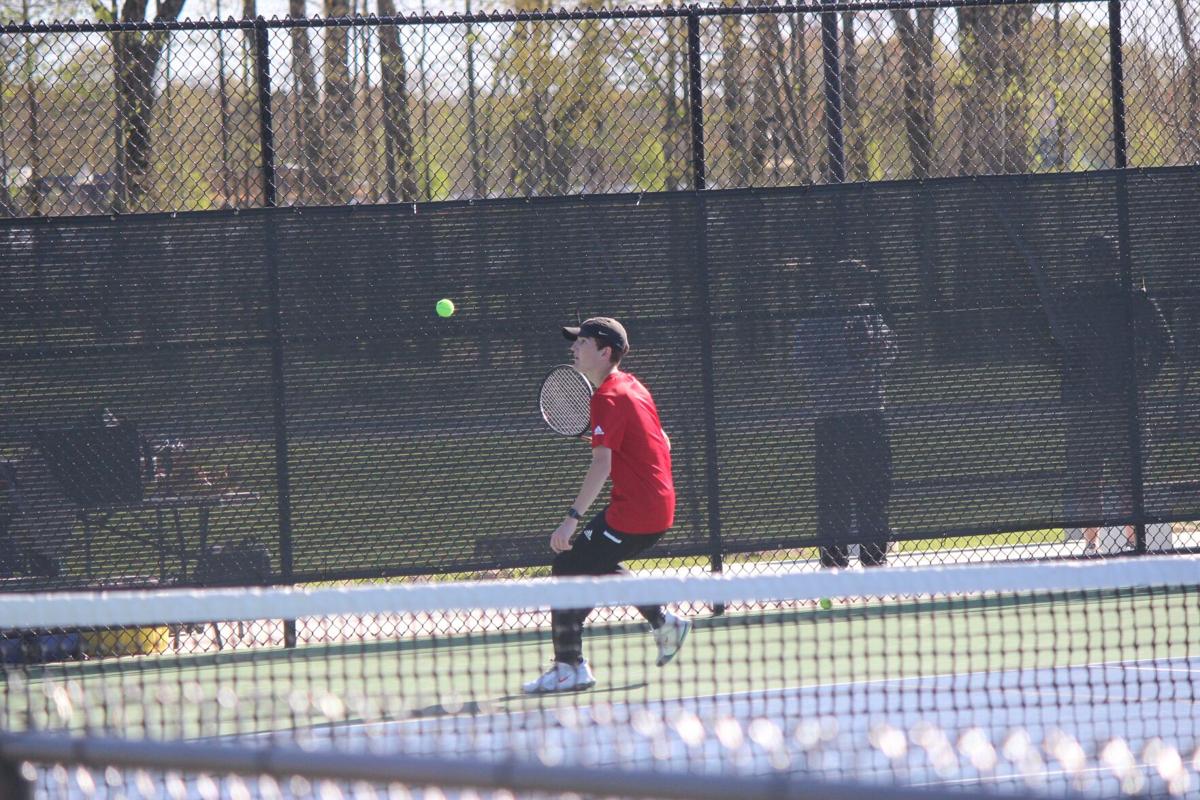 From left to right, the members of the 2021 Marshall County Boys All-County Tennis team are honored follow the conclusion of the annual Tournament. Albertville captured the boys’ title in convincing fashion. Members of the All-County team are: Lane Young, Curtis Richey, and Sam Bartcliff of Albertville, Masen Howard and Wesley Hawkins of Douglas, Elisha Sims of Guntersville, Lance Clark of DAR, and Anderson Lambert or Boaz.

In the first Marshall County Tennis Tournament to take place at the new Sand Mountain Park Tennis Center, which also happens to the home courts for Albertville High School, the Aggies proved to be the kings and queens of the courts on Friday, claiming both County titles over rival Guntersville. The annual event was hosted by DAR despite being played in Albertville.

In addition to DAR hosting the event, a number of former area tennis player returned to help put on the event, including Trois White of Boaz who played collegiately at Gadsden State, and Savannah Young of Albertville, who played at Birmingham Southern taking time out of their day to volunteer at the event.

In addition to local coaches and former players helping the tournament and local tennis scene thrive, a big boost came from the new SMPA courts. The facility’s 12 hardcourts helped keep play moving according to Wisener, with the first matches of the day starting at around 8:30 a.m., and with play concluding around 5:30 p.m.

“Marshall County was very excited to be able to partner with the new Sand Mountain Parks and Recreation to host this County Tournament at the new facility,” Wisener added. “It was a long day, but with 12 courts we did finish close to 5:30.  I think that Sand Mountain Tennis Facility definitely has the opportunity to complete with other facilities in the future for tennis events.”

The tournaments featured bracket style play, with points awarded for winning matches, and featured nine flights on both the boys’ and girls’ sides, six singles flights and three doubles flights.

On the boys’ side, the Aggies dominated the field, racking up 55 points as a team, 21 more than runner-up Guntersville for the overall title. Douglas and Boaz each netted 23 points as a team to finish in a tie for third, while Arab grabbed eight points to take fifth, one-spot ahead of DAR.

The Aggie boys showed their dominance by reaching the final match of each of the nine flights, taking six of the nine titles that were awarded. Douglas won two titles, including the No. 1 singles and doubles flights, while Guntersville captured the No. 3 doubles crown for its lone title.

Masen Howard’s play at No. 1 singles continued his undefeated season for the Eagles.

On the girls’ side, it was a neck-and-neck battle between rivals Albertville and Guntersville, with the day coming down to late matches to decide the winner and county bragging rights. In the end, the Aggies pulled out a narrow victory over the Wildcats, nipping them by just four points, 39-35, to claim the crown.

Following close by were Douglas with 24 points for third, Arab securing 22 points for fourth, and Boaz totaling 15 points to take fifth ahead of DAR.

The Albertville girls also showed off their depth during the tournament, seeing its players make the finals in six different flights on the day, including winning the titles in No. 1 and No. 2 singles, No. 5 singles, No. 6 singles, and No. 3 doubles.

Guntersville was nearly up to the task of matching the Aggies, reaching four finals, and capturing all four finals that they did reach, which were No. 3 and 4 singles, along with No. 1 and 2 doubles crowns.

Arab reached four finals but were unable to take home an individual crown, while Douglas had three reach the finals in their respective flights, with Boaz seeing one player reach the finals.

With the County championships in the books, the next big event on the tennis calendar starts Monday, with Sectional Tournaments across the area kicking off.