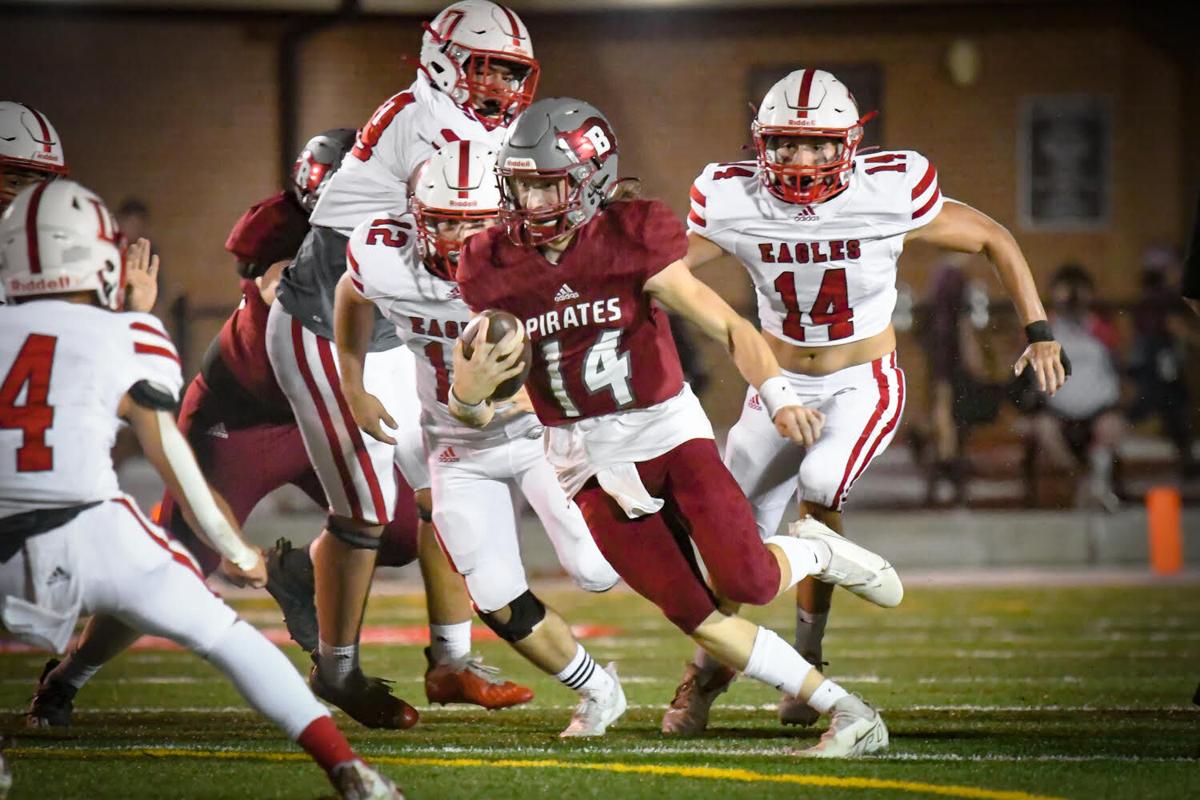 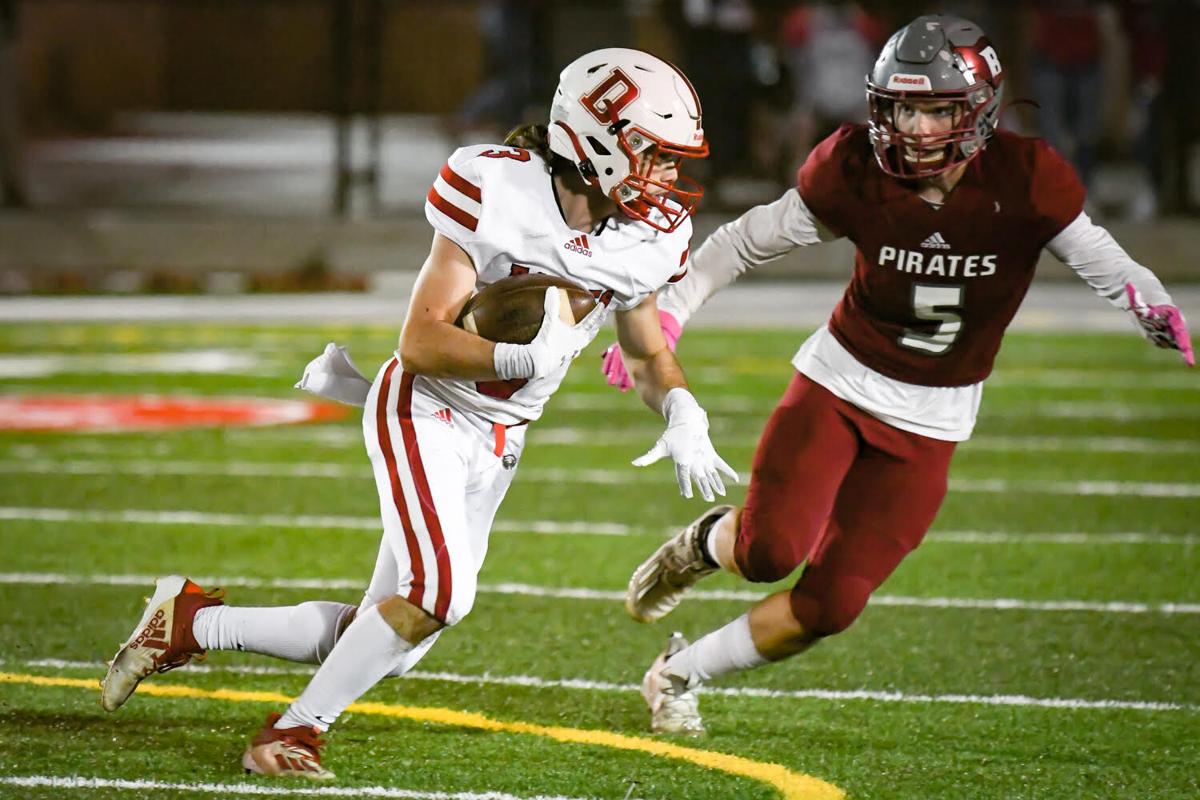 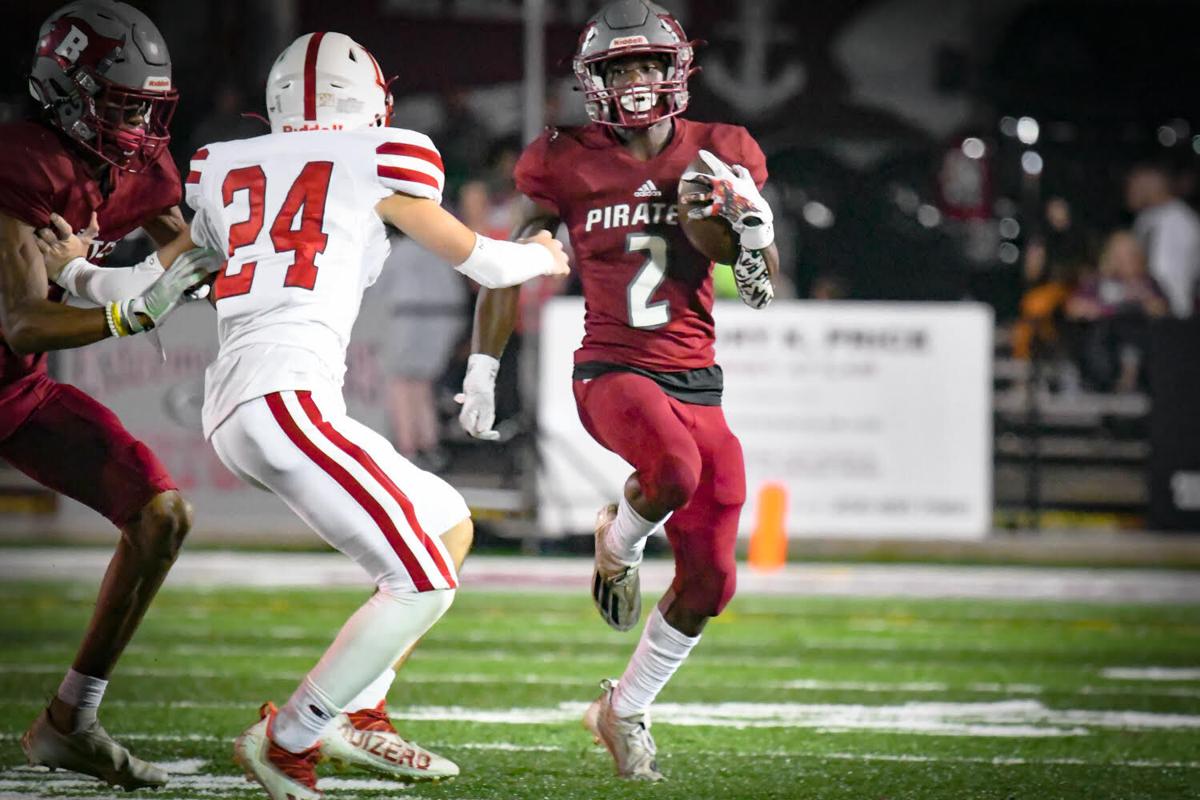 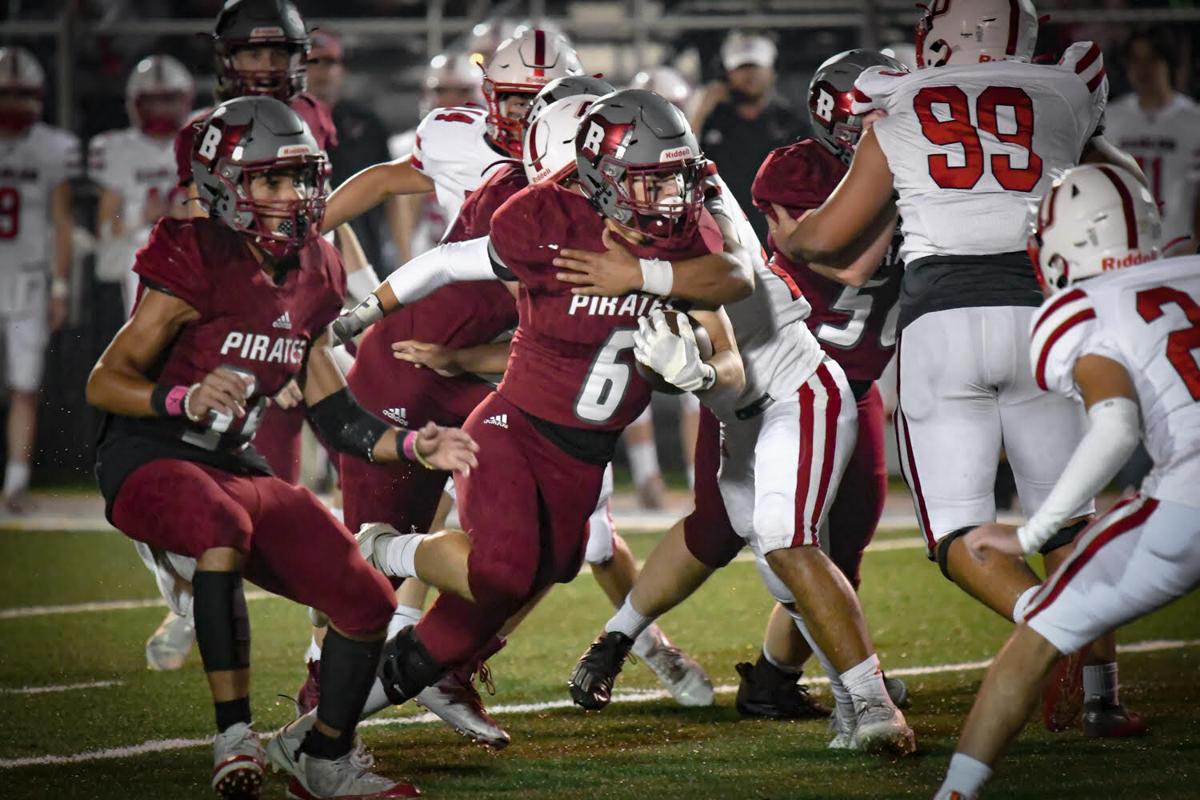 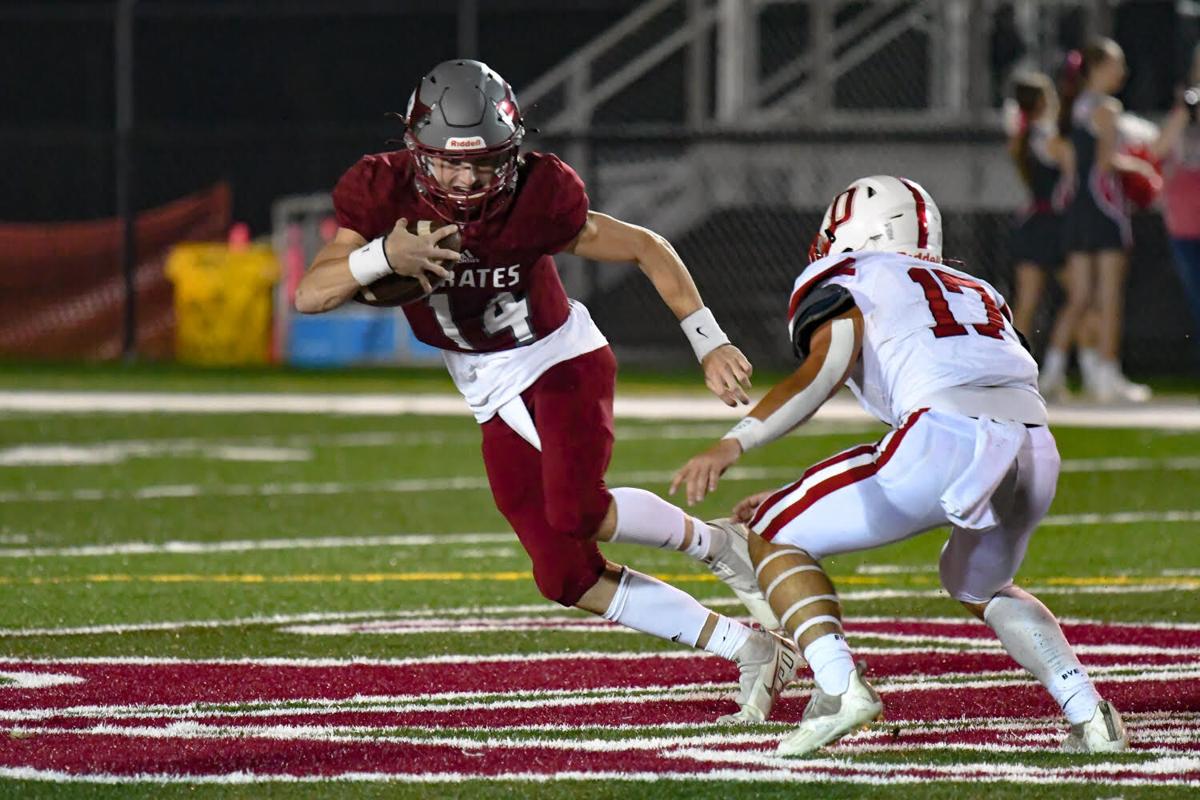 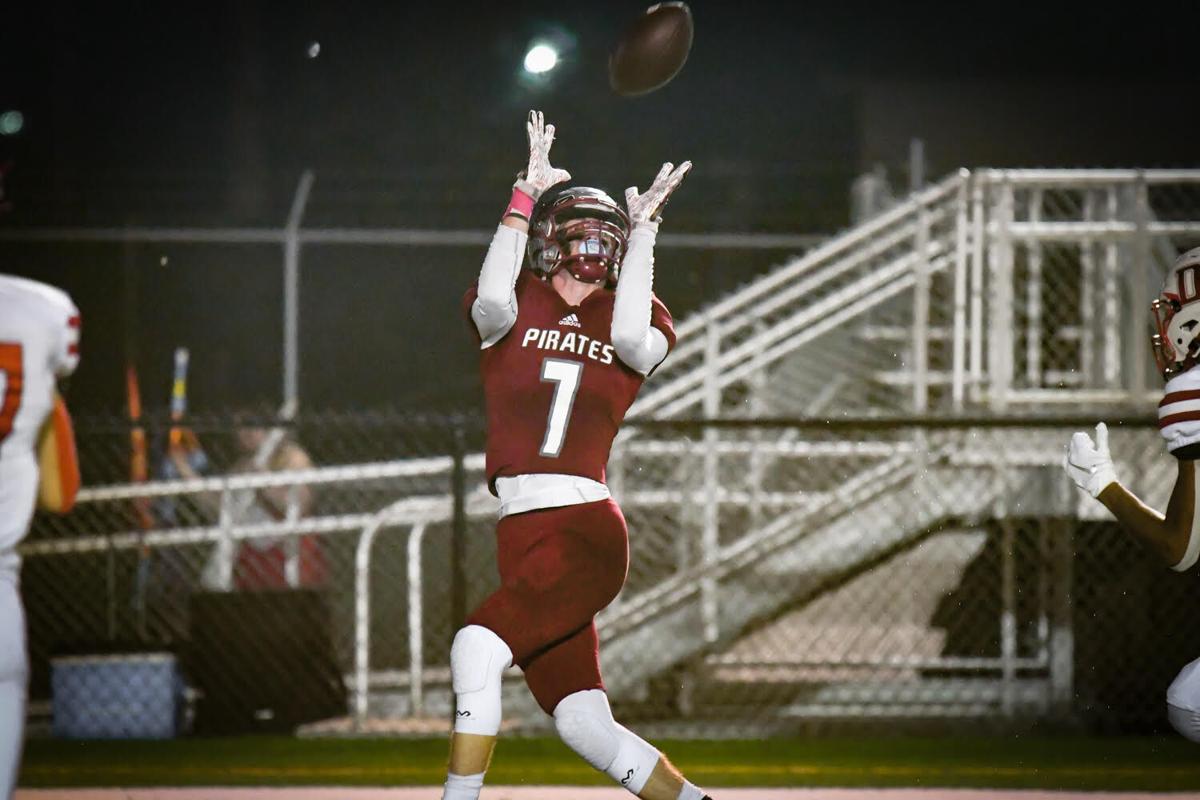 The Boaz Pirates jumped out a big lead on the back of a record-setting rushing night, taking down county rival Douglas on Friday night, 49-20.

The Pirates scored on their first four drives of the game, and as a team rushed for 488 yards on 59 rushing attempts, setting a new school record, topping the old mark of 451 which was also set against Douglas back in 2003.

“I really thought our offensive line played really well and our receivers blocked their tails off,” Boaz head coach Jeremy Sullivan said of the rushing effort. “It was a collective effort on that side to control the line of scrimmage. It was something we worked hard at because we didn’t do it well the week before. The backs ran well, and they blocked well for each other, it was a good, collective effort.”

After a Douglas three-and-out to open the game, the Pirates went right to work on the ground, with Cade Whorton scoring on the fourth play of the drive on a 30-yard run to make it 7-0 less than three minutes into the game.

On the next Douglas series, Boaz’s Korbyn Pitts picked off his sixth pass in the past four games, and his seventh on the season, setting a new school record for interceptions in a season, eclipsing Tyler Baugh’s mark of six in 2006.

That interception setup a 12-yard from Eli Jacobs, who had a monster game with 260 yards on 18 carries, plus another two scores, including an 83-yard run on the first play of the second quarter to make it 21-0.

The lead jumped to 28-0 after another Douglas three-and-out when Gavin Smart got behind the defense for a 48-yard strike from Tyler Pierce.

“We really had preached that all week about how we wanted to start fast and establish a lead, and keep our foot on the gas,” Sullivan said of the 28-0 jump. “I thought our kids responded well. I was a little worried about how they’d respond to a tough loss last week.”

But Douglas then turned to the air and found its footing on offense, with two big passes to Raygan Edmondson setting up a 2-yard plunge from Dakota Stewart to make it 28-7.

The two teams traded touchdowns to close out the first half, with Pierce tossing his second score of the game, this time from a yard out on fourth and goal to Ty Sullivan to make it 35-7. That touchdown pass capped a 10-play, 80-yard drive that included Jacobs converting a third and nine on a run deep in Boaz territory.

Douglas answered with a nine-play drive on its next series, with Edmondson again shining, and this time scoring on a five-yard strike from Eli Teal just before halftime to make it 35-13 at the break. Edmondson had a monster game for the Eagles, hauling in 11 passes for 167 yards and a pair of scores, while Teal finished the night with 215 yard through the air.

Out of the halftime break, the ground game continued to work for the Pirates, with Jacobs going in from seven yards out to stretch the lead to 42-13 on the opening drive of the second half.

The two teams then traded fumbles on their next chance with the ball, with the Boaz turnover leading to another Douglas score. This time Edmondson and Teal hooked up from 27 yards out to make it 42-20 halfway through the third.

But as they did all game, the Pirates turned to the ground game again, seeing Whorton cap the scoring with a three-yard run late in the third quarter. In addition to the two scores, Whorton finished with 59 yards on the ground, while quarterback Carter Lambert added 107 rushing yards on 12 carries. As a team, Boaz averaged over eight yards per carry.

The Pirates will now turn their attention to a massive Region game next week against Top-5 ranked Guntersville, who will enter the game undefeated in Region play. A win for the Pirates could create a three-way tie atop the Region, while a loss would relegate them to third in the area and on the road in the opening round of the playoffs.

“We’ve got a great Guntersville team next week that’s a huge challenge for us,” Sullivan concluded. “We’re going to have to be playing our best to have a chance against them.”

Douglas, coupled with West Point’s narrow win over Sardis, falls a game behind West Point in the battle for the Region’s last playoff spot, with the two teams set to meet next Friday in Douglas and the winner likely claiming the final playoff position.