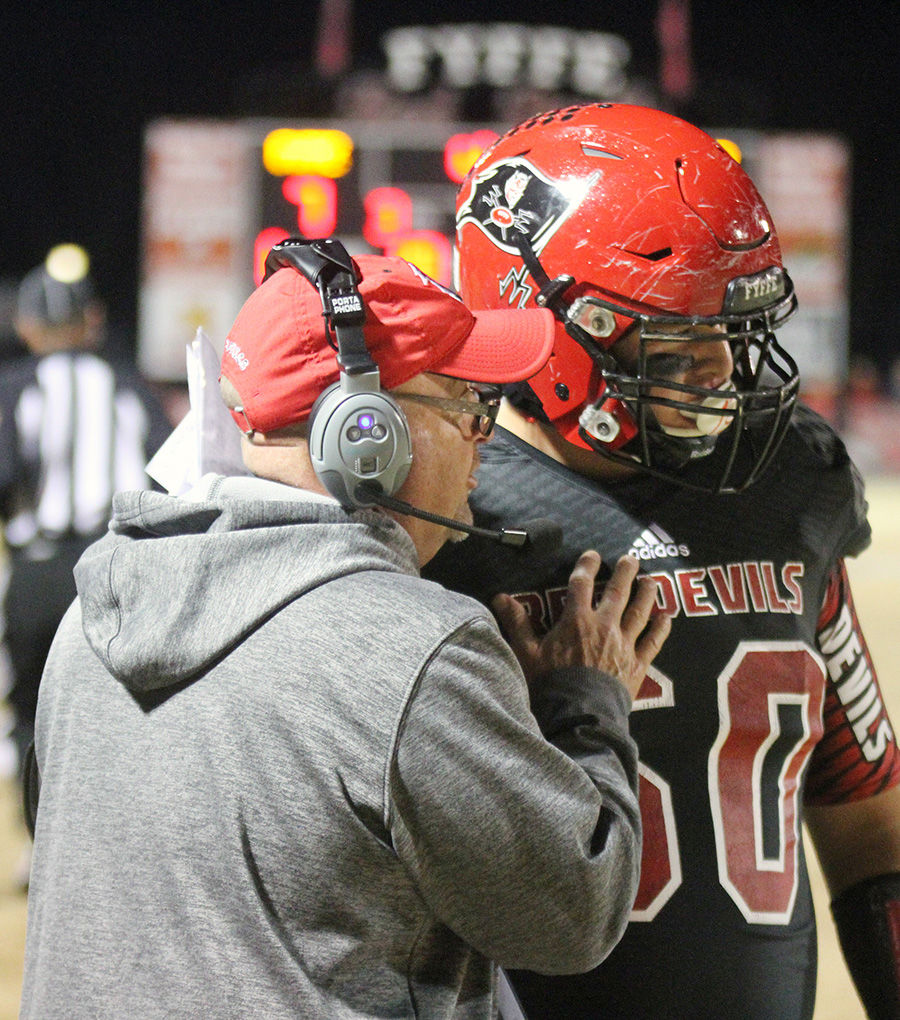 Fyffe head coach Paul Benefield gives a play to senior offensive lineman DeVan Smith during the Red Devils’ win over Collinsville in the Class 2A state playoff semifinals. Fyffe will be trying to win its second straight state title when it battles Reeltown on Friday. 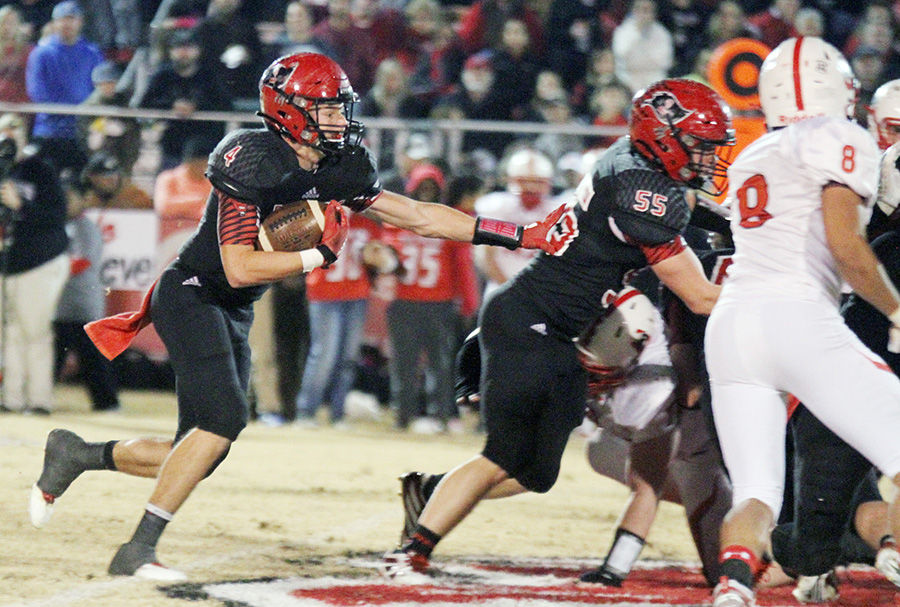 Fyffe running back Ike Rowell follows the blocking of lineman Chase Wooten during last week’s triumph over Collinsville in the Class 2A state playoff semifinals. Rowell, who averages 10 yards per carry, leads the Red Devils with 1,430 yards rushing and 24 touchdowns. Fyffe quarterback Zach Pyron has gained 845 yards and scored 20 touchdowns.

Fyffe head coach Paul Benefield gives a play to senior offensive lineman DeVan Smith during the Red Devils’ win over Collinsville in the Class 2A state playoff semifinals. Fyffe will be trying to win its second straight state title when it battles Reeltown on Friday.

Fyffe running back Ike Rowell follows the blocking of lineman Chase Wooten during last week’s triumph over Collinsville in the Class 2A state playoff semifinals. Rowell, who averages 10 yards per carry, leads the Red Devils with 1,430 yards rushing and 24 touchdowns. Fyffe quarterback Zach Pyron has gained 845 yards and scored 20 touchdowns.

FYFFE — No. 1 Fyffe and No. 6 Reeltown have met once in football, with the Red Devils rolling to a 34-0 win at Long-Ridgeway Stadium in the second round of the Class 2A state playoffs in 2014.

The stakes are higher for the teams’ second matchup, as the unbeaten Red Devils (14-0) and Rebels (13-1) collide in the Class 2A state championship game Friday afternoon at 3 in Auburn’s Jordan-Hare Stadium.

It’s fitting that Reeltown is the home team, because Auburn University is in the Rebels’ backyard. It’s their first appearance in the state finals since 2010.

The Red Devils also won 2A state crowns in 2014 and 2016 and are making their fifth Super 7 appearance in six years.

Fyffe is riding a school-record 29-game winning streak. Ranburne handed Reeltown its only loss, a 27-26 decision in the regular-season finale.

The Red Devils crushed Ranburne 38-7 in the second round of the state playoffs. They reached the Super 7 by shutting out Collinsville 21-0, their ninth shutout of the year.

Fyffe has outscored its opponents 583-36 this season.

“They have a very talented skill group of kids, and they have tremendous speed,” Benefield said of the Rebels. “They’re physical on the front [line].

“It’s the kind of team you expect to see, actually, you expect to see in the last two rounds. We saw one last week in Collinsville. Reeltown is going to have more speed than anybody we’ve played.

“They line up in everything. They spread it out and their quarterback [Hooks] will run around — he can fly too — and then they’ll get in the wishbone with two tight ends. This time of the year we’ve seen almost everything. We know kind of how to line up, but whether we can tackle them or not is going to be the key to the game.”

The Rebels’ feature a four-star prospect in receiver Eric Shaw, a 6-foot-5, 215-pounder who is verbally committed to South Carolina.

“We’ve got pretty mature kids all the way around for the most part, who study film and try to listen to what our game plan is going to be, and that’s why they are where they are,” Benefield said.

“They don’t have great skill … they’re just a blue-collar team who really plays great together, and they’re in the right spot usually. But you know, speed can get all that messed up.

“We’ve got to run our offense with precision and make first downs, but you’ve also got to score, you’ve got to make touchdowns. First downs don’t matter. Well, first downs matter as far as eating the clock up and playing the game at the speed we want to play it.

“We’re going to miss some tackles, but we need to get a lot of people around the ball and play hard, and I know we will. We’ve got to run physical, block physical and just be a physical team.”

Benefield said special teams could be a difference maker in Friday’s game, because Reeltown’s Faison has returned kickoffs for touchdowns this season.

“Covering the kickoff or whatever it might be, you just can’t relax against a guy like that, or he’ll be 88 and out the gate,” Benefield said.

The Red Devils are scheduled to depart for Auburn on Thursday morning at 8. They’re set to practice at Auburn’s indoor facility Thursday afternoon at 3:30.

Fyffe will participate in Tiger Walk on Friday at 12:30 p.m.

“If people want to be at the Tiger Walk, they need to get there early,” Benefield said. “It ain’t going to be late.

“They’re going to get us right there at the right time. If you want to get in that, you better get there early or you’ll miss it.”

Benefield, who owns a 296-53 record in 28 years as a head coach, took Fyffe to the state finals for the first time in 2007 at Birmingham’s Legion Field.

“It’s a lot of excitement for the kids,” Benefield said of Friday’s game. “I want them to enjoy it. It’s a once-in-a-lifetime thing. Even though it’s happened to us, we still don’t take it for granted. You never know if you’ll ever get to come back again.

“If you had told me in 2007 … I was just taking all of it in at Legion Field, thinking about who all had been on that field. And I thought, ‘I’ll never be back here again, little old Fyffe.’

“Just kept working until I found the right … it took me a long time, I’m pretty dumb, but we’ve just got a little patent going here on things.

“And we’ll be proud of our kids, win or lose. They’re winners and their team is too, I’m sure. We won’t be defined by this one game. It’s been a great season.”