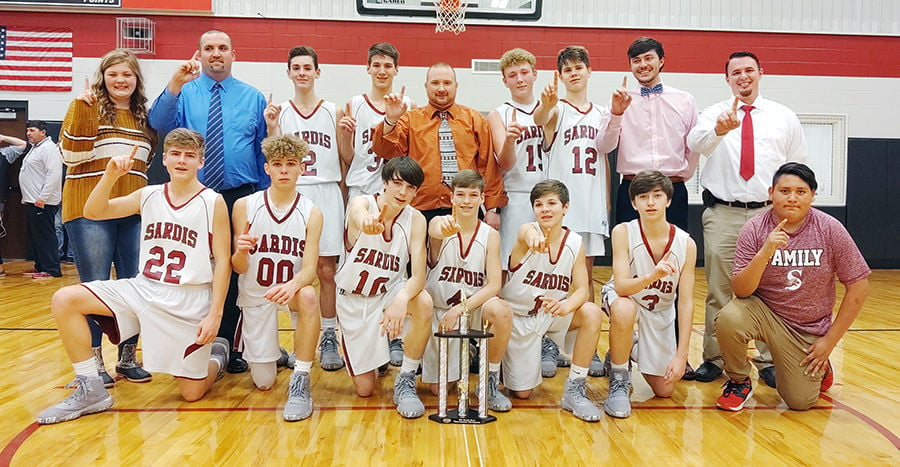 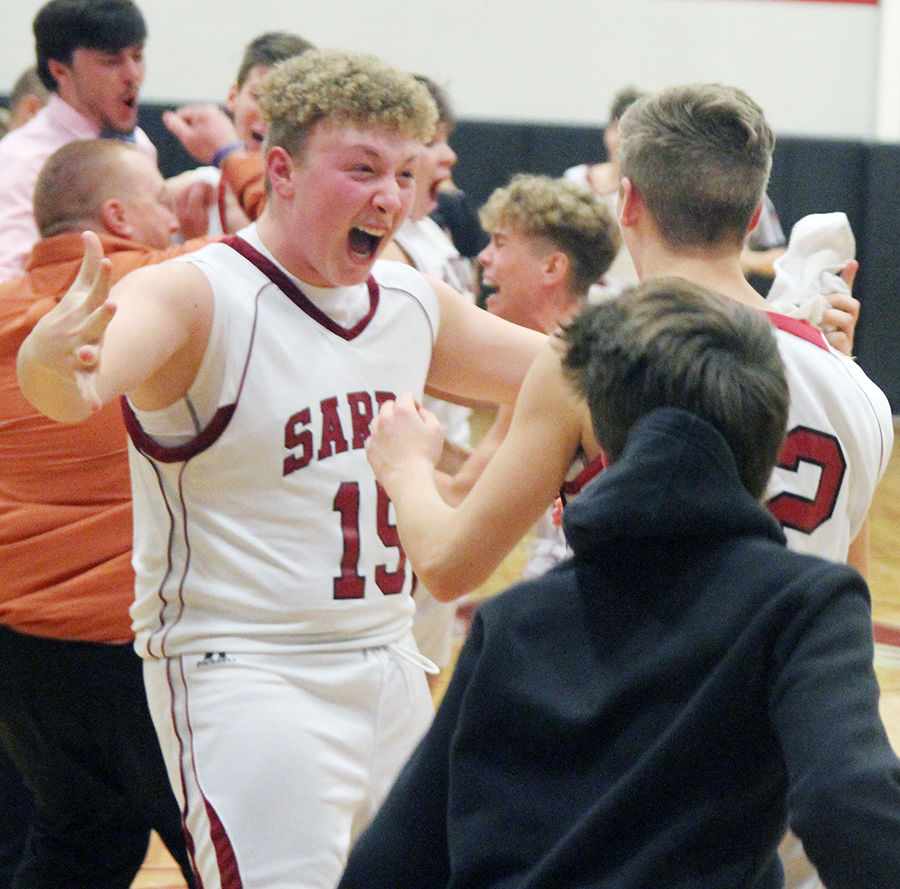 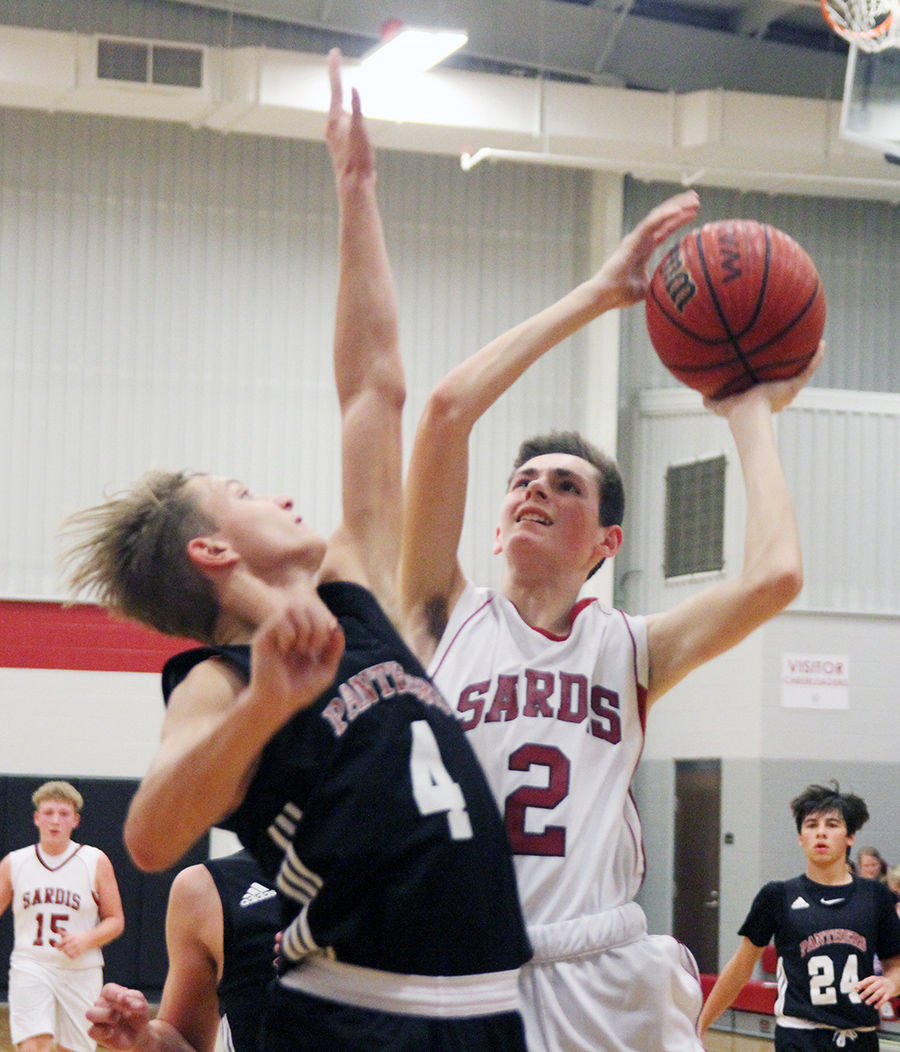 Andrew Felter of Sardis takes it to the basket against Rainbow Middle School defender Timothy Motes during Monday night’s eighth-grade boys championship game of the Etowah County Middle School Tournament. Felter finished 6-of-6 from the free-throw line, all in the fourth quarter and overtime.

Andrew Felter of Sardis takes it to the basket against Rainbow Middle School defender Timothy Motes during Monday night’s eighth-grade boys championship game of the Etowah County Middle School Tournament. Felter finished 6-of-6 from the free-throw line, all in the fourth quarter and overtime.

The host Lions roared back from a 16-point third-quarter deficit to beat Rainbow Middle School 57-54 in the Etowah County Middle School Tournament finals. The rousing victory enabled the Lions to finish 11-0 on their home court this season.

“It had been about seven years since I had coached boys basketball, but back in May I decided to take the eighth-grade boys job,” Sardis head coach Heath Cullom said.

“It turned out to be a great choice, as we had a very successful season. These boys share the same passion for basketball that I have. Our final record was 18-6.”

The Sardis eighth-graders won 33 games during their middle school careers.

Cullom’s squad took its fans on a rollercoaster ride of emotions Monday night.

The Lions sprinted to a 9-1 first-quarter advantage before turnovers and foul problems ran them into a ditch.

Rainbow Middle’s Cayden McMichael buried a 3-pointer with 2.1 seconds left, sending the Panthers to an 11-9 edge at the break.

Sardis regained the lead at 13-11 on Landon Carroll’s driving layup just over 30 seconds into the second quarter, but the Panthers pulled in front and didn’t trail again until late in the fourth period.

“Southside just made more plays and shots than us in the second quarter, and we started panicking and playing undisciplined basketball,” Cullom said.

Back-to-back treys by Brooks NeSmith and Reid Robinson stretched the Panthers’ margin to 37-21 with 2:31 left in the third quarter. But from then until the end of regulation, the Lions outscored RMS 25-9.

“We were finally able to get their attention during a timeout and made an adjustment to our offensive and defensive alignments, and we started making plays once we settled down,” Cullom said.

Luke Martin’s 3 and four points from Carson Gillilan allowed Sardis to trim its deficit to 39-28 at the third-quarter break.

Gillilan put the Lions on his back in the fourth quarter, as he carried their offense by scoring 10 points. The Panthers found him unstoppable in the paint.

Gillilan’s two free throws cut it to 43-40 with 1:47 remaining. Following a Southside turnover, Eli Morton grabbed an offensive rebound and fed Gillilan for a layup, slicing it to 43-42 at the 1:10 mark.

Gillilan made a steal, and Luke Martin converted it by pulling up for a jumper that gave the Lions a 44-43 lead with 54.5 seconds to go.

Timothy Motes drained a 3, putting Rainbow Middle in front 46-44 with 38.8 seconds to play. Gillilan answered for Sardis, as his putback tied it 46-46 with 22.3 seconds on the clock. His 16th rebound of the night led to his clutch basket.

Southside committed a traveling violation 11 second later, giving the Lions a chance to win it in regulation. Martin drove to the baseline and got a good look at a jumper that rimmed out, sending the game into overtime.

NeSmith’s layup gave the Panthers a 48-46 lead eight seconds into overtime, but the Lions responded with an 8-0 run, capped by Carroll’s 3-pointer, that propelled them to a 54-48 cushion with 1:56 left.

The Panthers fought back, chopping Sardis’ lead to 55-54 on James Bain’s putback with 12.5 seconds remaining.

The officials called Rainbow Middle for an intentional foul four seconds later, but the Lions missed both free throws. The Panthers then fouled Carroll, who hit 1-of-2 free throws to make it 56-54 with 6.6 seconds on the clock.

Rainbow Middle committed a traveling violation with 1.7 seconds to go, and Martin followed by sinking 1-of-2 free throws with a second left. Carroll stole the inbounds pass to seal the Lions’ championship.

Gillilan powered the Lions with 21 points. Martin netted 15, including three treys, and Carroll 12.

Andrew Felter hit 6-of-6 free throws and finished with six points for the Lions. Morton contributed two and Trey Thornton one.

“That turned out to be an unbelievable middle school basketball game,” Cullom said.

“Carson Gillilan had a huge game, and if we gave out awards he would’ve been the tourney MVP. He finished with 21 points, 18 rebounds, six steals and four blocks.

“As a team, we were 8-for-9 from the [charity] stripe in our fourth-quarter comeback.

“Our students, cheerleaders and other players that were in our student section were key in this victory, as they provided our guys with some much-needed energy.”

Rainbow Middle put three players in double figures – Motes with 12 and Bain and McMichael with 10 each.

Sardis 63, West End 3: The Lions trampled the Patriots in the semifinals Jan. 7.

Jonathon Wills and Gillilan both scored 12 to pace Sardis’ attack. Martin followed them with 11.

Baylor Garrard and Morton netted eight each, Carroll and Felter four apiece and Mason Harraid and Thornton both two.