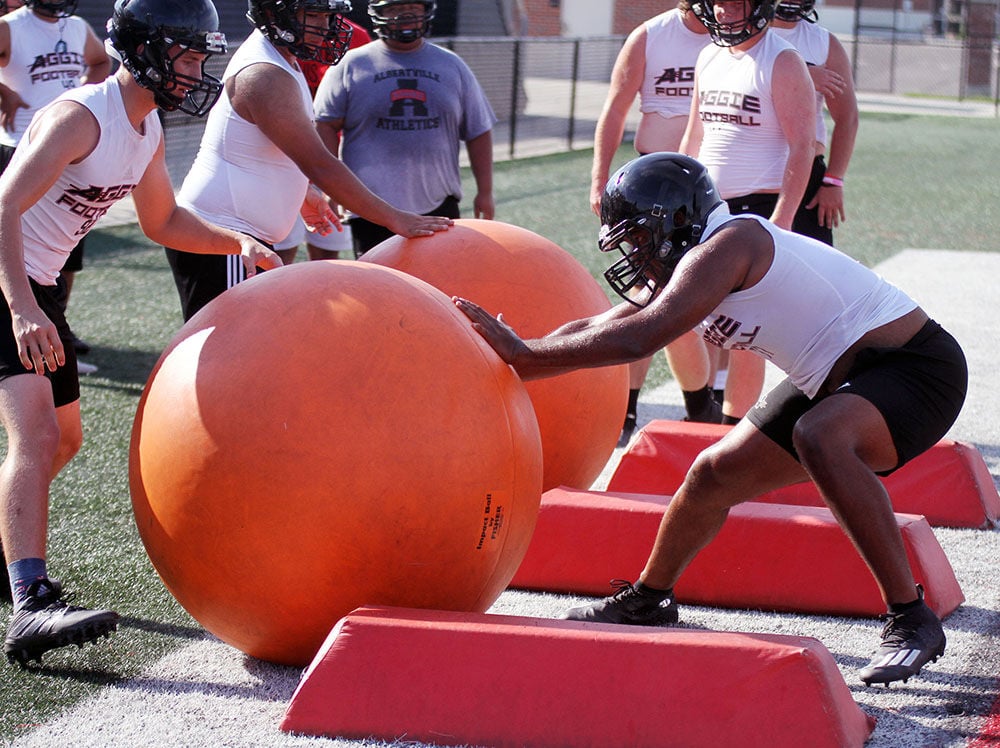 Junior defensive lineman Keejay Blount participates in a drill Monday morning during the Albertville football team’s first preseason practice session of 2020. Like all teams across the state, the Aggies missed spring practice due to the COVID-19 pandemic. 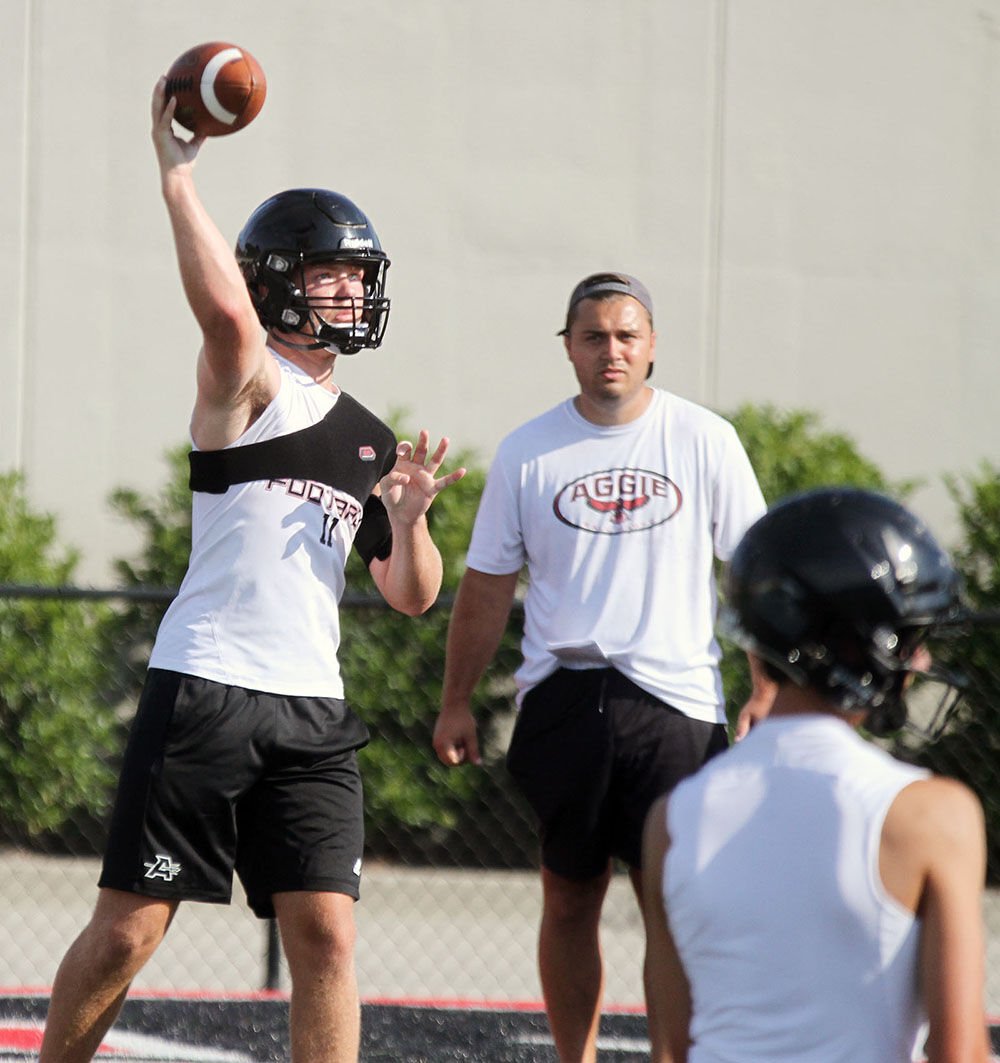 Albertville quarterback Ben Allen will be a senior during the 2020 season. He saw his first start during his freshman season. He completed 69 percent of his passes for 2,328 yards and 20 touchdowns last year. 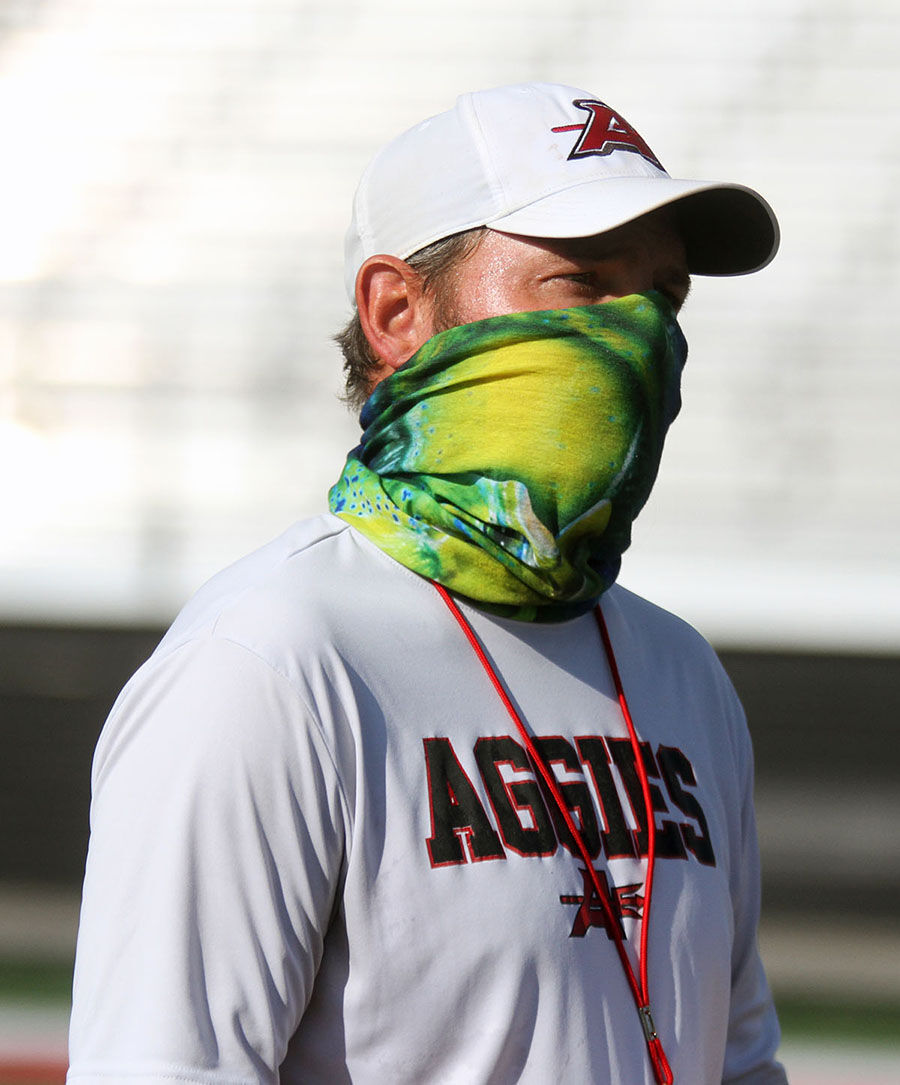 Second-year Albertville head coach Cliff Mitchell wore a mask during Monday’s practice session and walked around with a container of hand sanitizer. 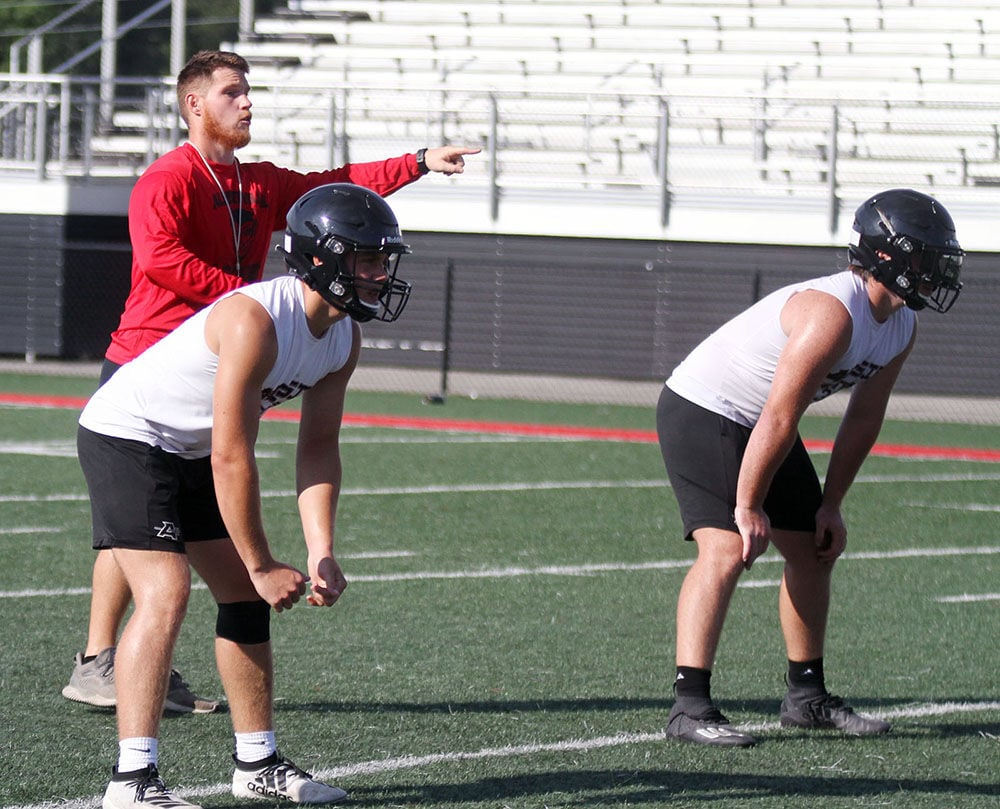 Junior defensive lineman Keejay Blount participates in a drill Monday morning during the Albertville football team’s first preseason practice session of 2020. Like all teams across the state, the Aggies missed spring practice due to the COVID-19 pandemic.

Albertville quarterback Ben Allen will be a senior during the 2020 season. He saw his first start during his freshman season. He completed 69 percent of his passes for 2,328 yards and 20 touchdowns last year.

Second-year Albertville head coach Cliff Mitchell wore a mask during Monday’s practice session and walked around with a container of hand sanitizer.

The Albertville football team kicked off its first preseason practice as a Class 7A Monday morning on McCord Field at Aggie Stadium.

Albertville posted a 5-6 record and reached the first round of the state playoffs in 2019, its last season in Class 6A. The Aggies rank as the 22nd largest 7A according to figures released by the AHSAA when reclassification was announced in December. Class 7A features 32 schools.

“Our guys see it as an opportunity jumping up to 7A,” Albertville head coach Cliff Mitchell said. “There really hasn’t been a lot of talk about it among us. We’re just coming to work every day. Right now, we’re focused on getting ready for the season and getting ready for Arab, because it’s less than a month away now.”

Albertville hosts Arab on Aug. 20, a Thursday night, in its season opener. The Aggies are off Aug. 28 before diving into 7A, Region 4 play with a Sept. 4 trip to Sparkman.

AHS worked out in shorts and helmets Monday morning. The Aggies can practice in shells (shoulder pads and helmets) for the first time Aug. 3. Their first full-contact scrimmage is Aug. 7. The AHSAA established those dates.

“We’re ready to put some pads on and start hitting some folks and seeing what we’re made of,” Mitchell said.

At the offensive skill positions, the Aggies’ returning lettermen include senior quarterback Ben Allen, senior running back Jovany Lopez, senior running back/receiver Chi Jordan (who is switching from No. 26 to No. 4) and senior receiver Trinity Bell, who is verbally committed to Tennessee. Jackson Godwin and Trent Jones, both seniors, are back to anchor the offensive line.

“Today, our offense was kicking a little bit and finally starting to get into a groove of going fast,” Mitchell said. “We have a senior quarterback and skill guys all over the place. We have a good offensive line, and they’re starting to click and go.

“Defensively, our D-line and linebackers are older guys, so they pretty much know what’s going on. In the back end, we’ve got some younger guys back there but we’re going to get going.

“We’re proud of the guys who have been here in the mornings this summer, because getting up every morning to come to football practice, that ain’t everybody’s cup of tea. That’s why everybody doesn’t play football — it’s a little bit tough.

Mitchell was wearing a mask at Monday’s practice and carrying a container of hand sanitizer. He understands the importance of practicing the COVID-19 health and safety guidelines, because the virus impacted his team during summer workouts.

“We had a few early on who tested positive, and I think right now that’s going to be a part of life,” Mitchell said. “We’ve got our plan in place if somebody does test positive.

“We’re taking temperatures, and we’re wearing masks when we’re inside. We’re just trying to do the things to keep us healthy so we can play football.”

“Pat Callahan played for me a long time ago,” Mitchell said. “Makes me feel old. Pat is coming to us from Boaz. He’s going to coach inside backers for us.

“Micah Stallworth is going to come on as a volunteer assistant. He’s going to help us on the defensive side of the ball with linebackers.

“Those are two guys who are on the Aggie Wall of Fame in the field house, and you like to get Albertville guys back home when they want to come home.

“I’m excited about having them with us.”

Assistant head coach David Boman moved from coaching inside linebackers to assisting defensive coordinator Will Richard with the secondary.