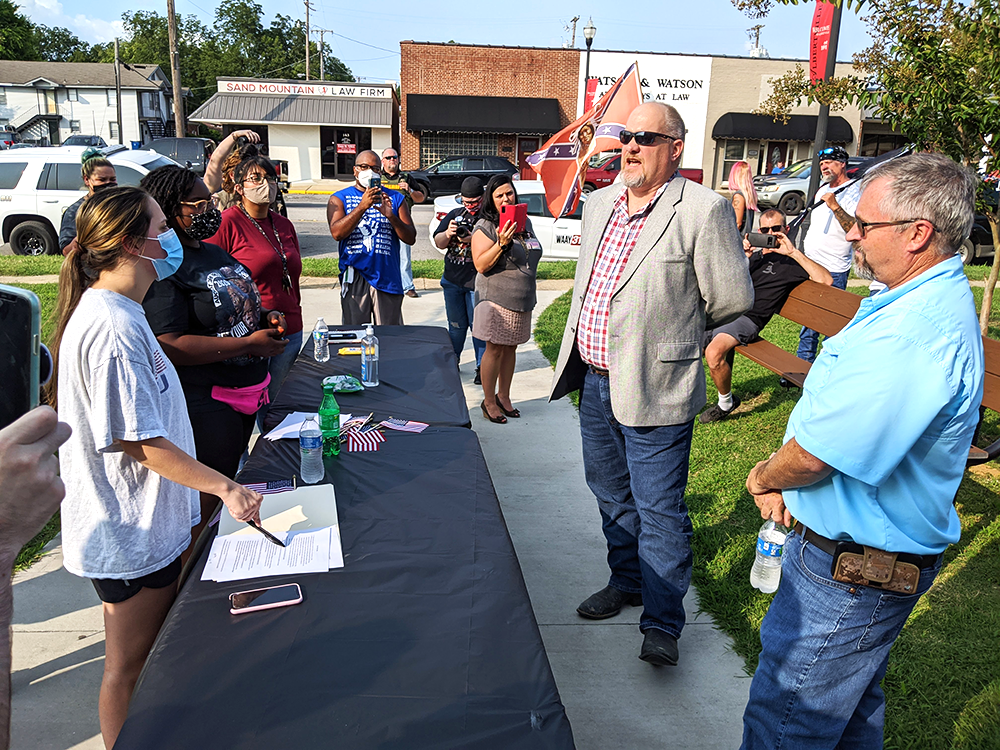 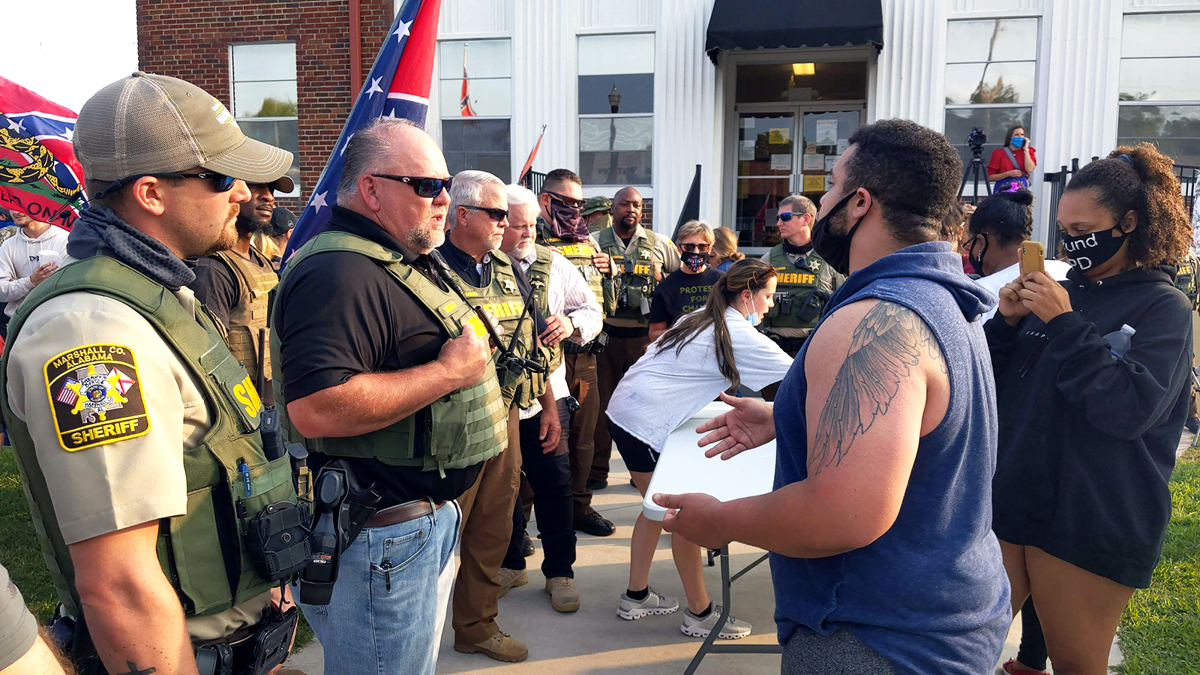 Marshall County Sheriff Phil Sims (second from left) talks with a protester after he and several deputies stepped in to disband the crowd as the debate devolved into a shouting match. 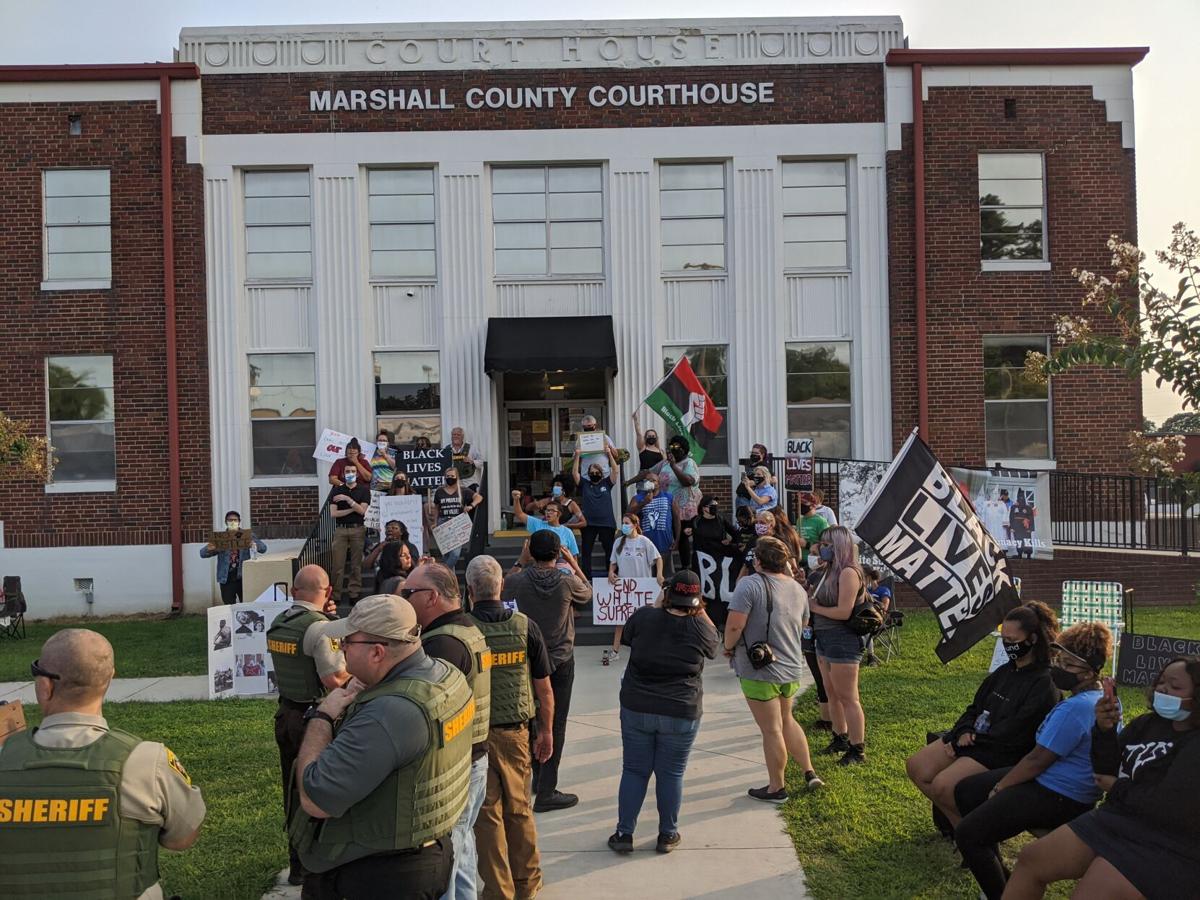 Protesters against Confederate monuments (left) debated Confederate supporters in front of the Albertville Courthouse, arguing the memorial and flag located there should be removed. Carl Jones (wearing gray sport coat) was the primary speaker for the pro-Confederates, though many people voiced their opinions on both sides.

The Reporter | Daniel Taylor
1 of 3

Marshall County Sheriff Phil Sims (second from left) talks with a protester after he and several deputies stepped in to disband the crowd as the debate devolved into a shouting match.

What began as a polite debate over the removal of a Confederate monument from in front of the Albertville Courthouse on Wednesday devolved into a shouting match between protesters and counter protesters as emotions flared on both sides of the issue.

A crowd gathered around a table in front of the courthouse as figurative battle lines were drawn between those for and against the monument’s removal.

Speaking for those in favor of removal, Anna Katheryn Quick opened the debate by raising three issues concerning the cause of the Civil War, the role of black people during the Civil War and the significance of Confederate monuments and rebel flag in general.

“Let’s be peaceful,” she said before making her opening arguments. “We probably won’t agree, but honestly this is probably the most productive thing we are going to get done is having a peaceful conversation.”

Quick went on to argue that slavery was the singular initiator of the Civil War, citing five of 11 states mentioning it as the primary reason for secession as well as the Constitution of the Confederate States prohibiting the passing of laws against owning slaves.

“Many people say the war got started because of state’s rights and taxes and tariffs, but those are just kind of dog-whistle terms,” she said. “It was about slavery.”

Carl Jones, Commander of the Alabama Division of the Sons of Confederate Veterans and the primary representative of the pro-Confederate group during the debate, argued that states had every right to secede from the union and did so due to northern states “inflicting” their “will” on southern states and general overreach of the federal government.

There was an equal amount of consensus when it came to the Confederate flag itself.

“If I were a black person and I had to come into this courthouse to have my case decided and I looked at that flag, I would have a real sinking feeling in my stomach,” a woman said in favor of the flag’s removal.

Pointing to a miniature American flag lying on the table, Jones said that it was actually the official flag of the Ku Klux Klan, not the Confederate flag, which he argued that also negatively co-opted.

Jones asked those against the Confederate flag why they weren’t also against the American flag since both have been flown during slavery and by the KKK.

“Because yours [Confederate] is a traitor flag,” Quick rejoined.

When it came to the monument at the courthouse, Jones said it was meant as a memorial for the individual soldiers who fought and died in the Civil War.

“Do you know what the purpose of that monument is?” he asked. “The soldiers that went and fought under this [Confederate] flag … many of them never came home. My own ancestor; that right there is his headstone… That is a gravestone to all of the men who never returned...and that flag is a part of that monument.”

“Why do you feel the need to memorialize one person when I can’t memorialize any of the slaves that were killed?” protest organizer Unique Dunston responded.

The debate continued until passions intensified over racial slurs spoken by both sides, forcing deputies with the Marshall County Sheriff’s Office to step in to separate the two groups. Before the debate began, deputies told both sides to make sure no one brought any weapons or loudspeakers and to keep things civil, Assistant Chief Deputy Steve Guthrie said.

“Everybody has a right to protest,” Guthrie said. “We just want to make sure it’s peaceful.”

The protesters gathered on the courthouse step and began demonstrating well into the night.

“They got their position and we got ours,” Jones told The Reporter after the debate. “I was hoping we could reach common ground, but I don’t think that is going to be possible... I think it’s too bad. I think we got bigger things to try to fix in this country than taking flags down.”

Dunston said she did not intend to change people’s mind with the debate but rather wanted to let sides state their case and hear each other.

“I think we accomplished our goal, which was to hear each other,” she said to The Reporter. “We’re not naive in that we thought we were going to change minds out there because we know that their belief in their heritage is so strong, but our goal was to hear them.”

Dunston said she plans to keep attending every Marshall County Commission meeting followed by a protest at the Albertville Courthouse. Though she frequently speaks with Commission Chairman James Hutcheson about the monument, she is still waiting for the commission to take up the discussion, she said.

Hutcheson told The Reporter  he will continue to provide opportunities for people on either side of removing the monument to speak at the commission meetings but there’s been no discussion among the commission.

“Up the road, there will probably have to be one sometime or another,” he said. “As of right now, there just doesn’t appear to be any incentive to have a discussion. I think everybody realizes it’s a tough situation and it’s very sensitive on both sides.”

Hutcheson said the monument and flag issue has been on his mind “continuously” and one of his main concerns has been with keeping people safe and injury free during the protests.

“My concern is I just hope nobody gets hurt,” he said. “You got protesters on both sides… Every week we’ve worked over time with the county deputies, which is costing us money we could put to a lot better use… but it’s something we have to do for the safety of the people, and the last thing I want is for somebody to get hurt.”