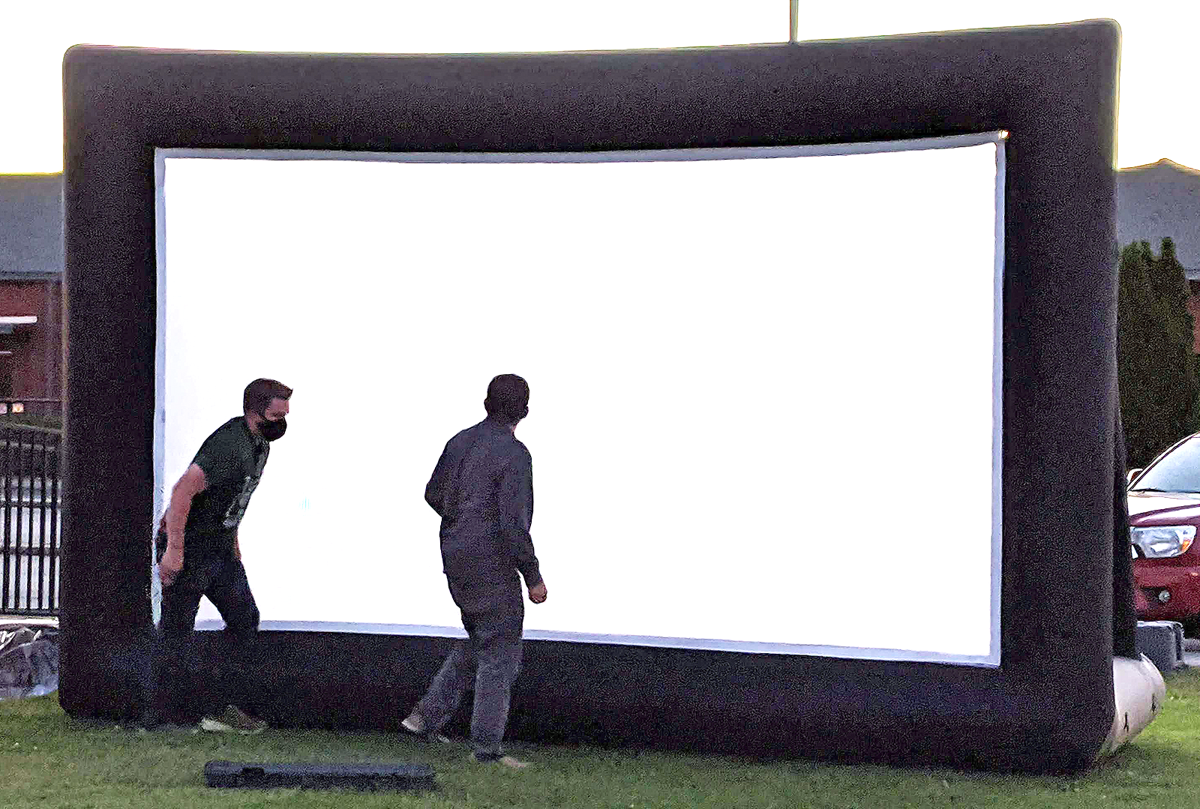 An inflatable projector screen being used by the protesters was allegedly punctured by a pro-Confederate counterprotester. 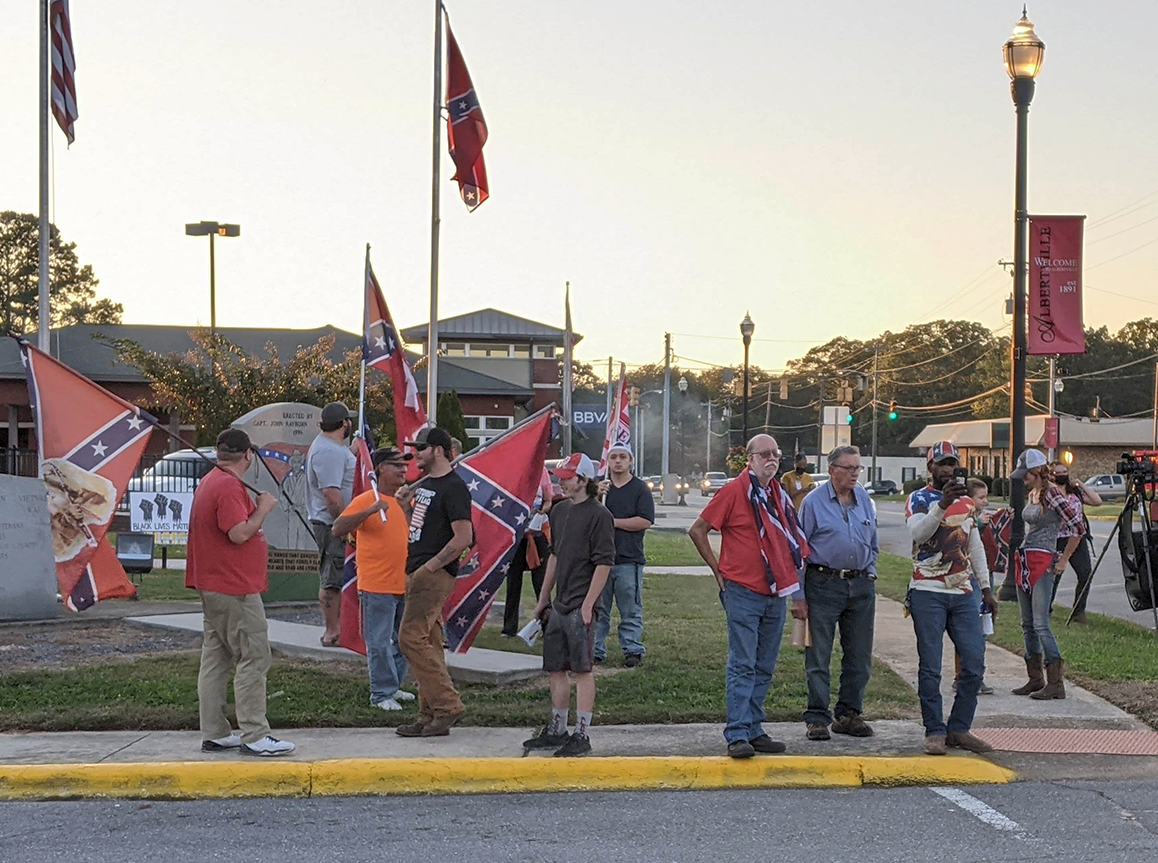 A group of counterprotesters gathers around the Confederate monument and flag at the Marshall County Courthouse in Albertville. 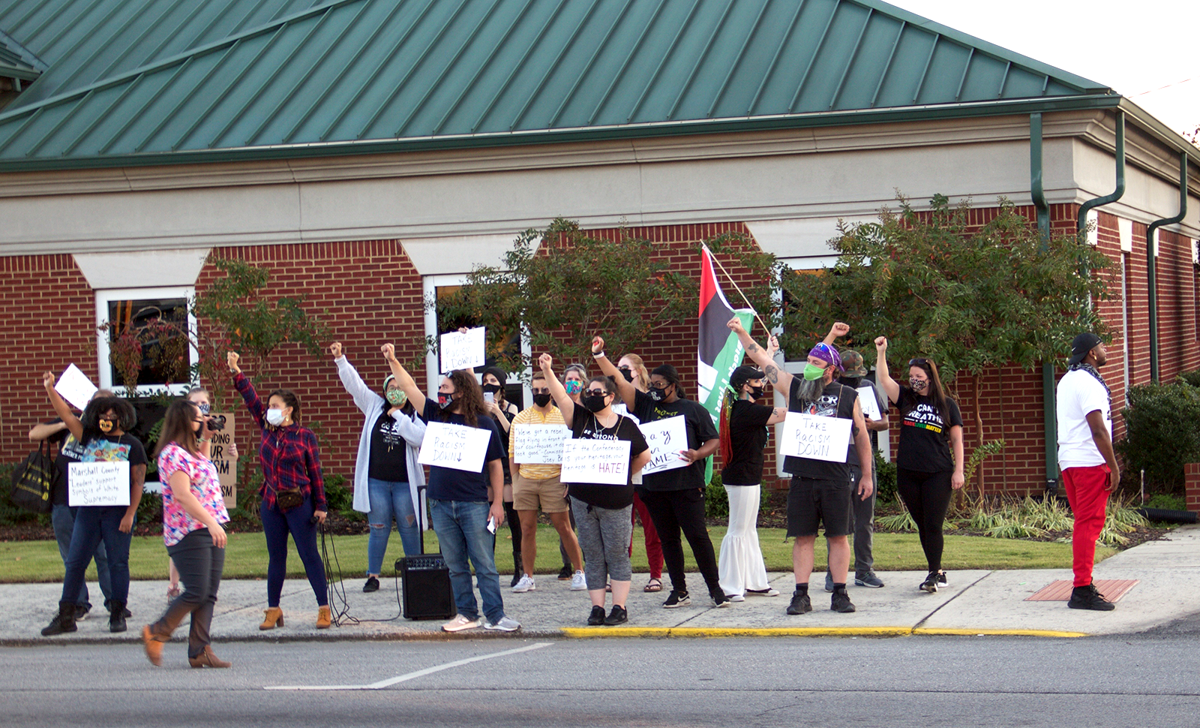 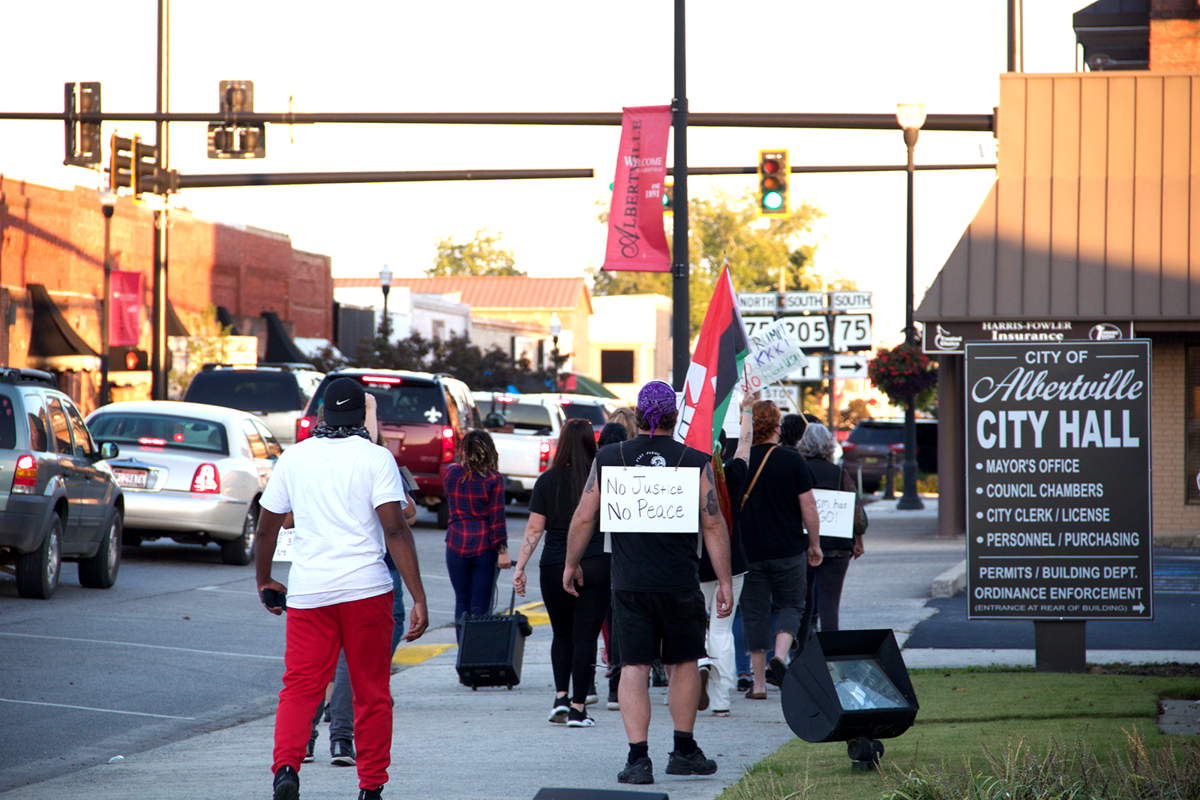 Protesters marched from the courthouse to U.S. Highway 431 and back. 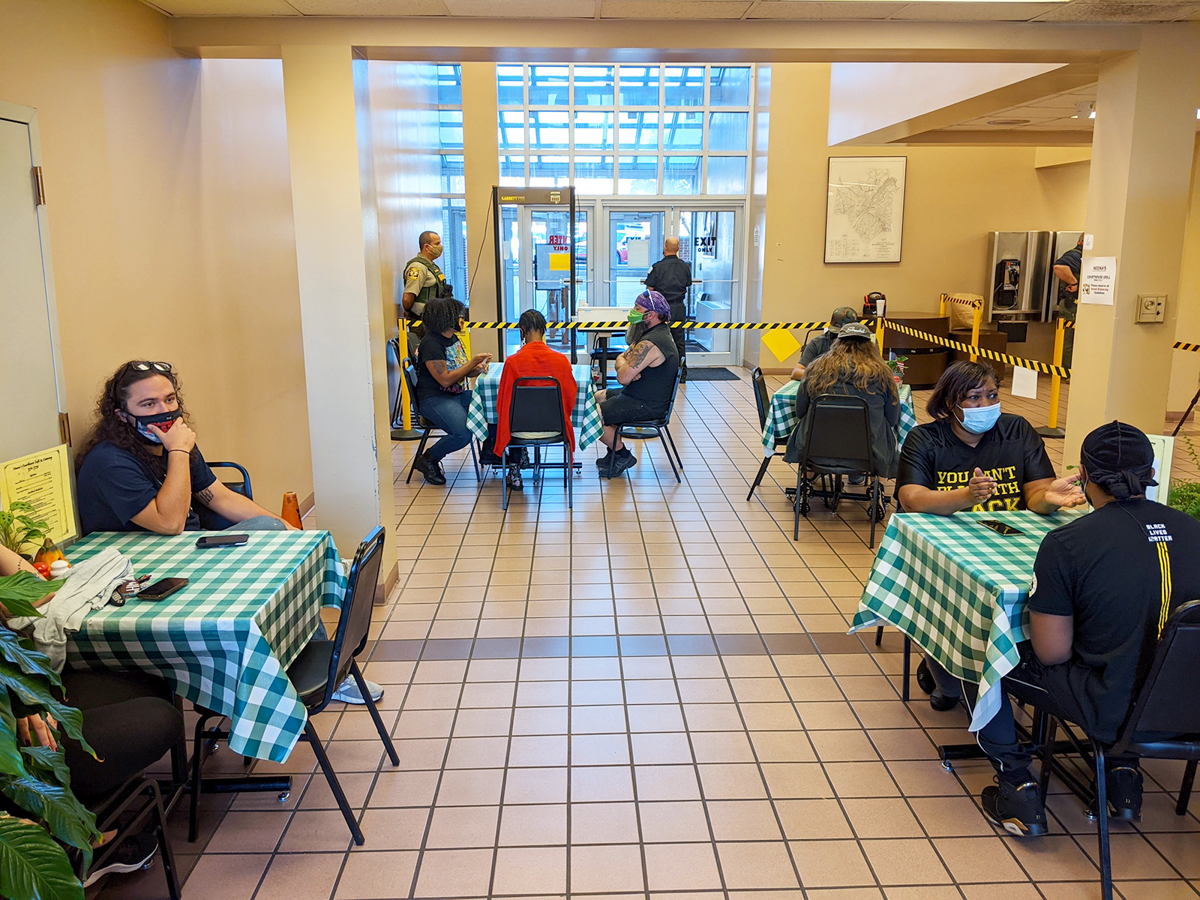 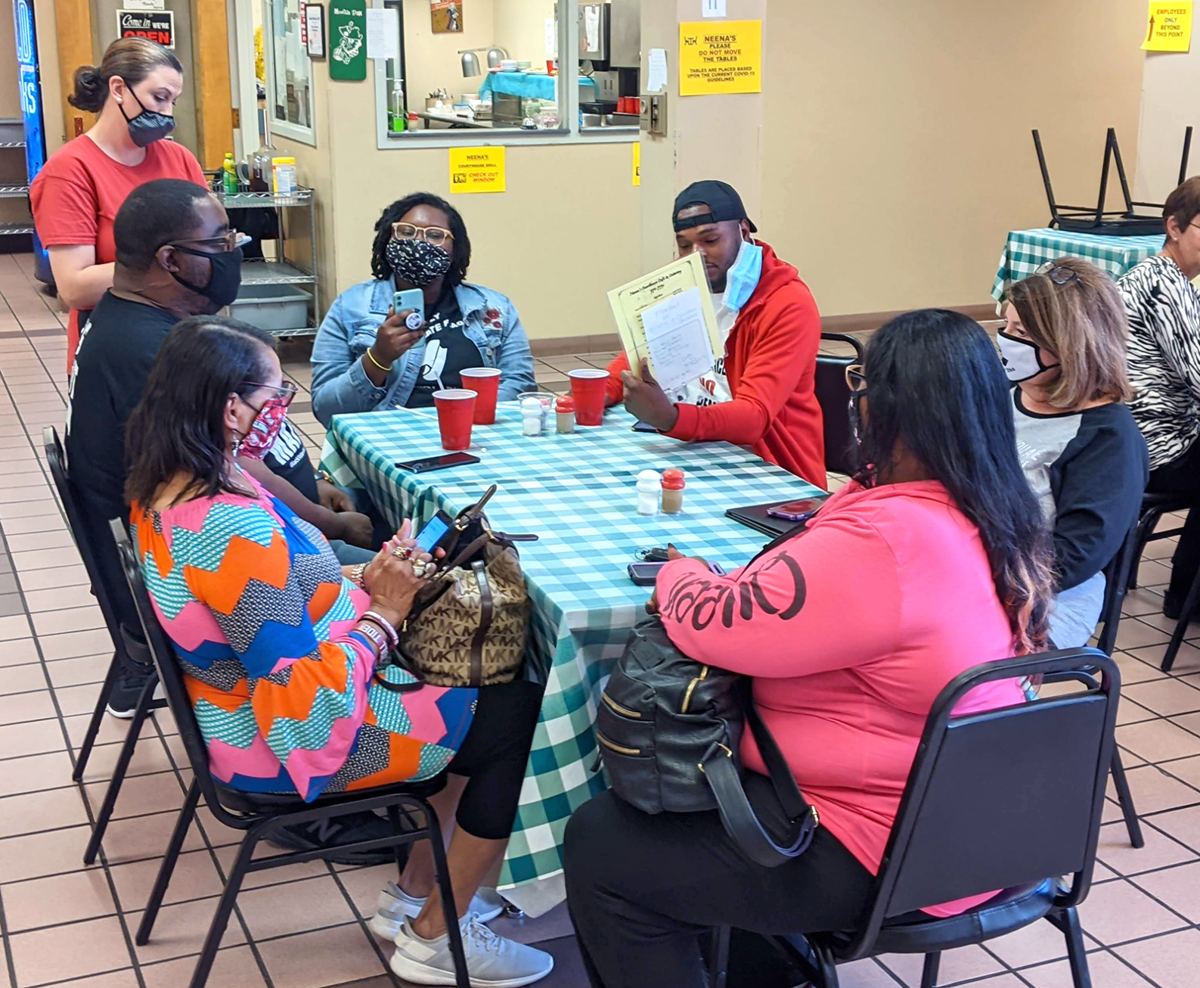 Many of the protesters ordered food during the sit-in. 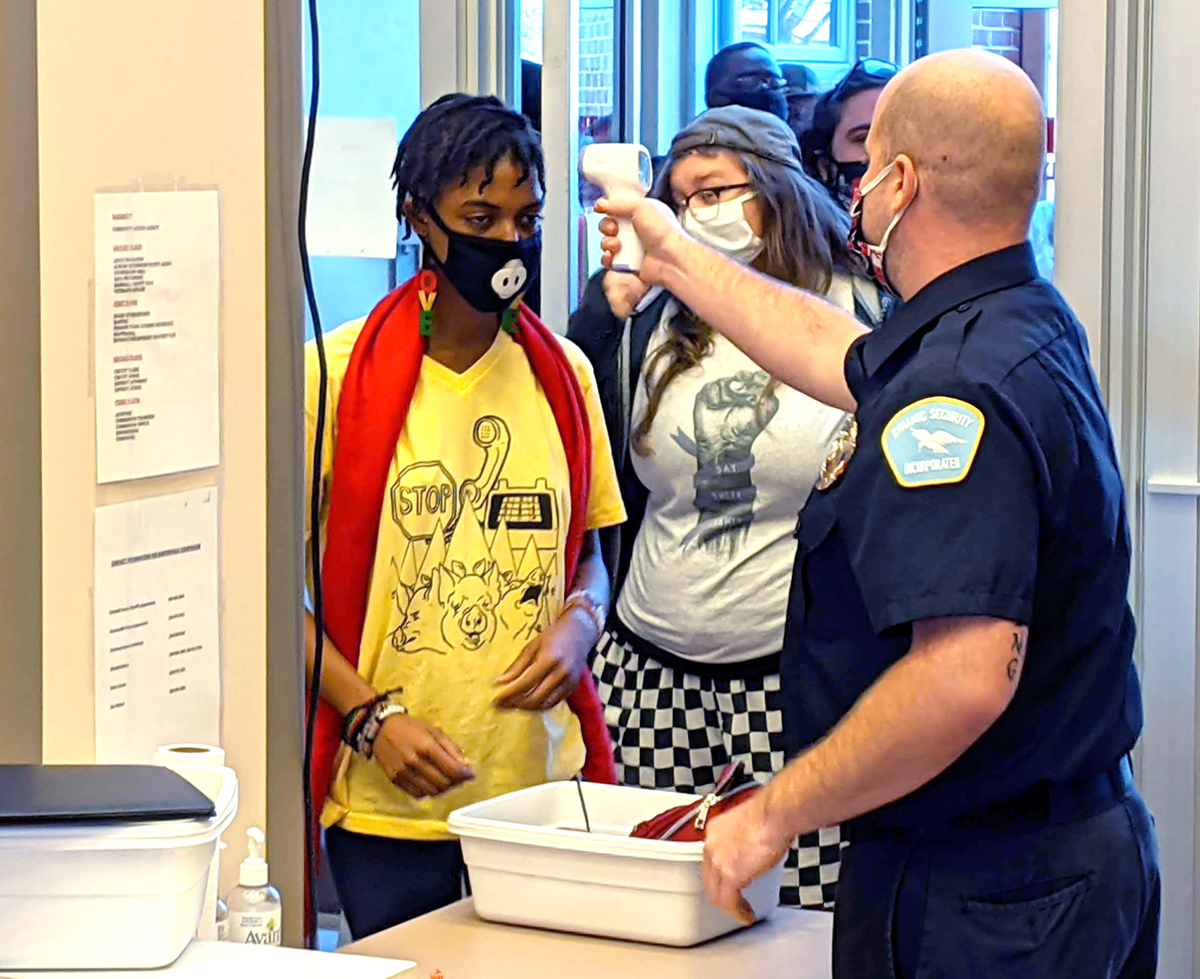 Protesters had their temperatures taken before entering the courthouse.

A group of protesters holding a sit-in at the Marshall County Courthouse in Guntersville were told to leave their signs outside before coming into the building.

The Reporter | Daniel Taylor
1 of 8

An inflatable projector screen being used by the protesters was allegedly punctured by a pro-Confederate counterprotester.

A group of counterprotesters gathers around the Confederate monument and flag at the Marshall County Courthouse in Albertville.

Protesters marched from the courthouse to U.S. Highway 431 and back.

Many of the protesters ordered food during the sit-in.

Protesters had their temperatures taken before entering the courthouse.

Anti-Confederate demonstrators at the Marshall County Courthouse in Albertville nearly had their plans deflated Wednesday night when a counterprotester allegedly cut a hole in their inflatable projector screen.

Say Their Names Alabama organizer Unique Dunston said she was leading a march around Albertville and U.S. Highway 431 when she got a call from her mother, who was at the courthouse, about the incident. According to Dunston, multiple witnesses saw a man pull out a pocket knife and cut a hole in the inflatable screen. The man then walked back into the crowd of counter protestors before leaving the courthouse entirely, she said.

Albertville Assistant Police Chief J.T. “Butch” Cartee said the incident was handled like any other.

“On Wednesday nights when they have a rally or a protest, we try to have officers available, but it depends on our call load,” he said. “It is supposed to be a peaceful protest, and that is what we count on.”

Officers quickly moved in to assess the situation and took statements from bystanders. Cartee said no arrest was made at the time of the incident because no officer had directly witnessed it happen.

However, a suspect was questioned, and a report was filed. If the owner of the projector screen wanted to press charges, Cartee said they could get a copy of the report and have a warrant filled out by the magistrates office.

It would most likely be a case of third-degree criminal mischief, he said.

The screen was being used by the protesters to show inspirational videos and musical performances throughout the evening. Dunston said the hole was able to be repaired onsite with some tape, so the videos were able to continue. However, the owner of the screen would be pursuing an arrest warrant against the suspect, she said.

Early that day, Dunston organized a sit-in at Neena’s Grill on the lower level of the Marshall County Courthouse in Guntersville. Approximately 15 protesters with Say Their Names Alabama and other organizations filed into the building after first being turned away due to their signs. Dunston said she thought the signs were allowed inside since they were hanging about their necks and not on a stick or post that could potentially be used as a weapon. However, Marshall County Sheriff Phil Sims no one would be allowed to bring in signs or flags, but they could chant as long as it wasn’t disruptive to courthouse business.

By having a sit-in at the grill close to the County Commission chambers, Dunston said she was hoping to “step up” and get the commissioners’ attention. At one point during the sit-in, Dunston attempted to confront Commission Chairman James Hutcheson about the monuments, but he declined to comment.

Before the sit-in began, Hutcheson told The Reporter he supported the group's right to protest, which he fought for as a U.S. Marine in Vietnam.

“I fought for the right for people to protest, express their opinion, and I believe in that very strongly,” he said. “I would do it again.”

After nearly two hours of sitting and chanting, the group took the protest to the streets of Guntersville before disbanding.

I was present at the protest and came with the person who brought the inflatable screen. There were multiple witnesses to the man putting his knife in the screen. Typically when officers are called out to the scene of a crime they have witnesses hand write reports which are provided to them by officers. This is very common and used by officers nation wide. The witnesses I know were not provided these forms. The officers acted as if this isn't something they had and instead referred them to what I believe they called their "justice center".

It should be noted the man with a knife brought a weapon to a protest. This is against the law. Officers who were at the scene left the man go. This leaves open precedent for people to continue bringing weapons to protests. I am very worried for the city of Albertville.